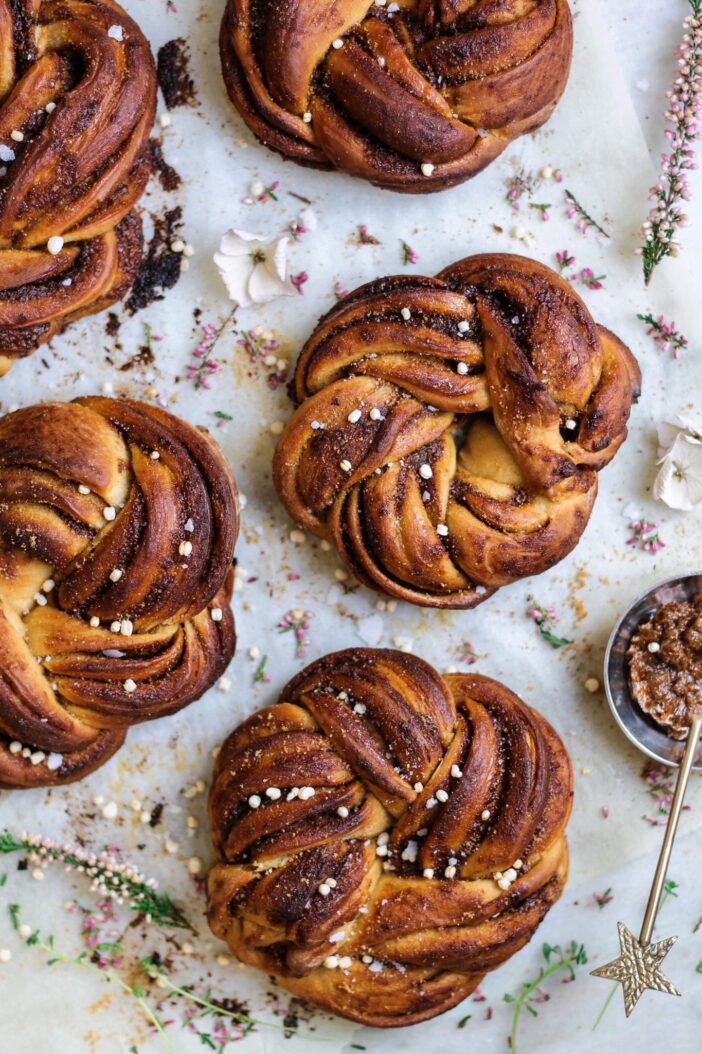 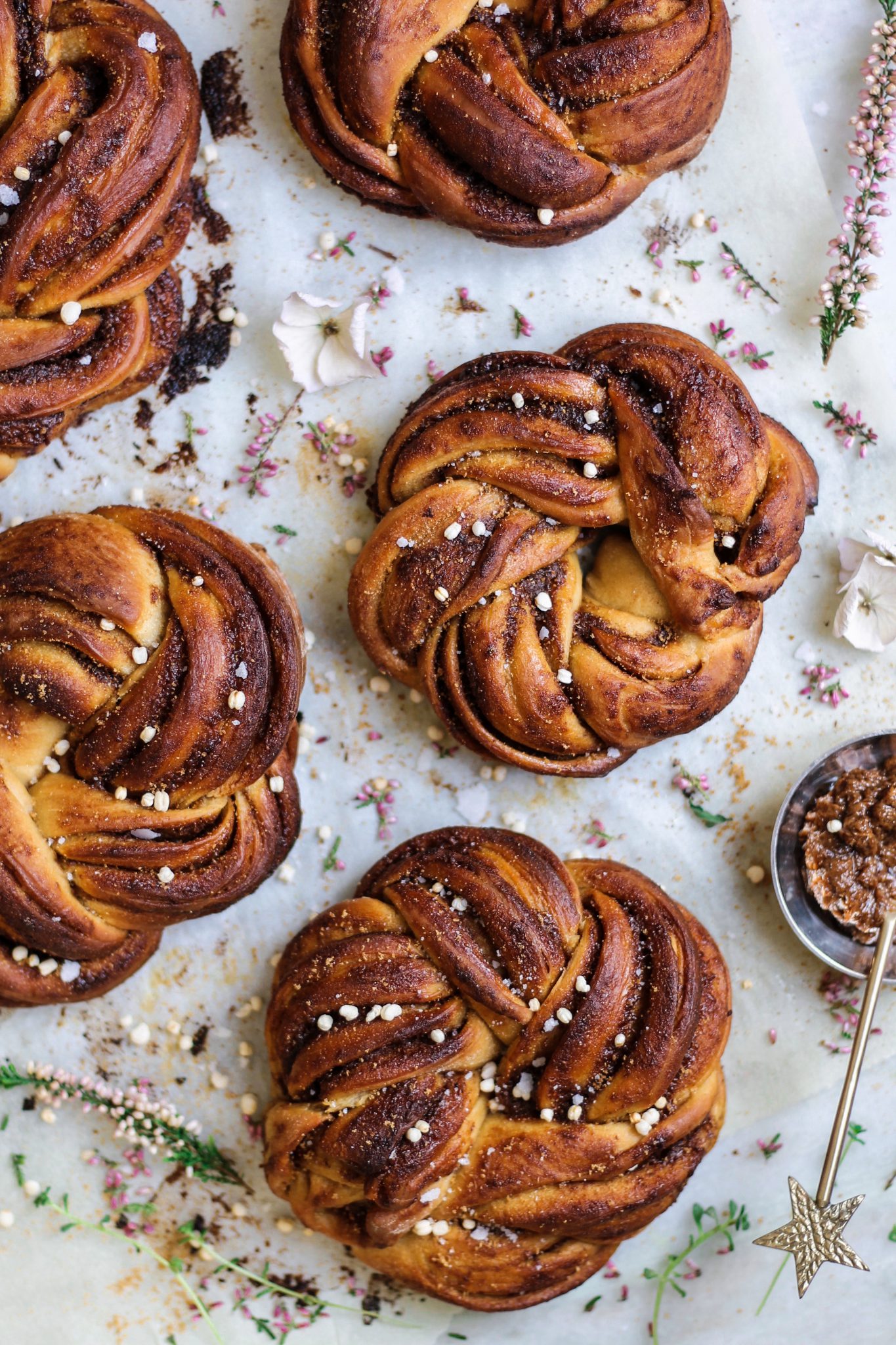 Hello beauty Cinnamon Braid Buns! Just take a look at these STUNNERS! (Also known as Estonian Kringle bread – mini ones). They are dressed to impress, am I right?!

These Vegan Cinnamon Braid Buns are a dreamy winter breakfast delight. They’re warm and puffy, sweet and satiating, and are perfectly crunchy on the outside with a soft and supple cinnamon sugar interior. A total 10/10!

But, I’m not going to lie to you… Although it might seem in the photos that these were thrown together at ease I was TOTALLY intimidated to make these cinnamon braid buns. Heck, I’ve never even made normal cinnamon buns, so why I thought adding a braid to the mix was a good idea is beyond me. But it turns out a little optimism goes a long way; just look at the outcome! In the beginning I was a bit of a spaz, holding my breath with every braid as if my life depended on getting it right. But after the first bun, you realize that the dough is quite nimble and forgiving. You can play around with it and manoeuvre it, without having it fall apart. (I’ve heard this about new born babies too. That they’re a lot less fragile than they look, but I’ll stick to testing my theory on dough for now!). And so by the third cinnamon bun I was folding and rolling the dough like an expert baker. Turning and manipulating it at ease like it was some sort of choreographed dance. 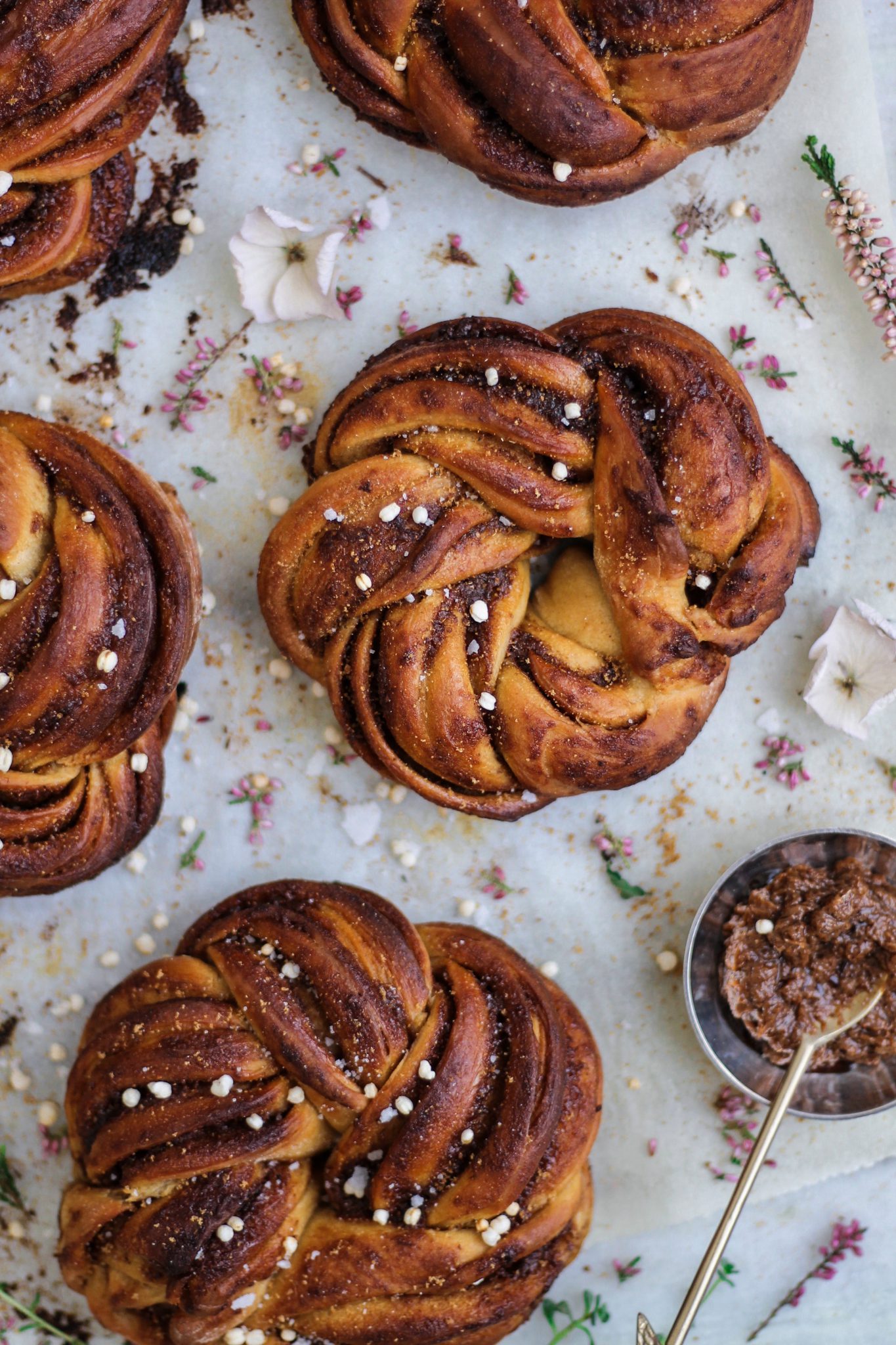 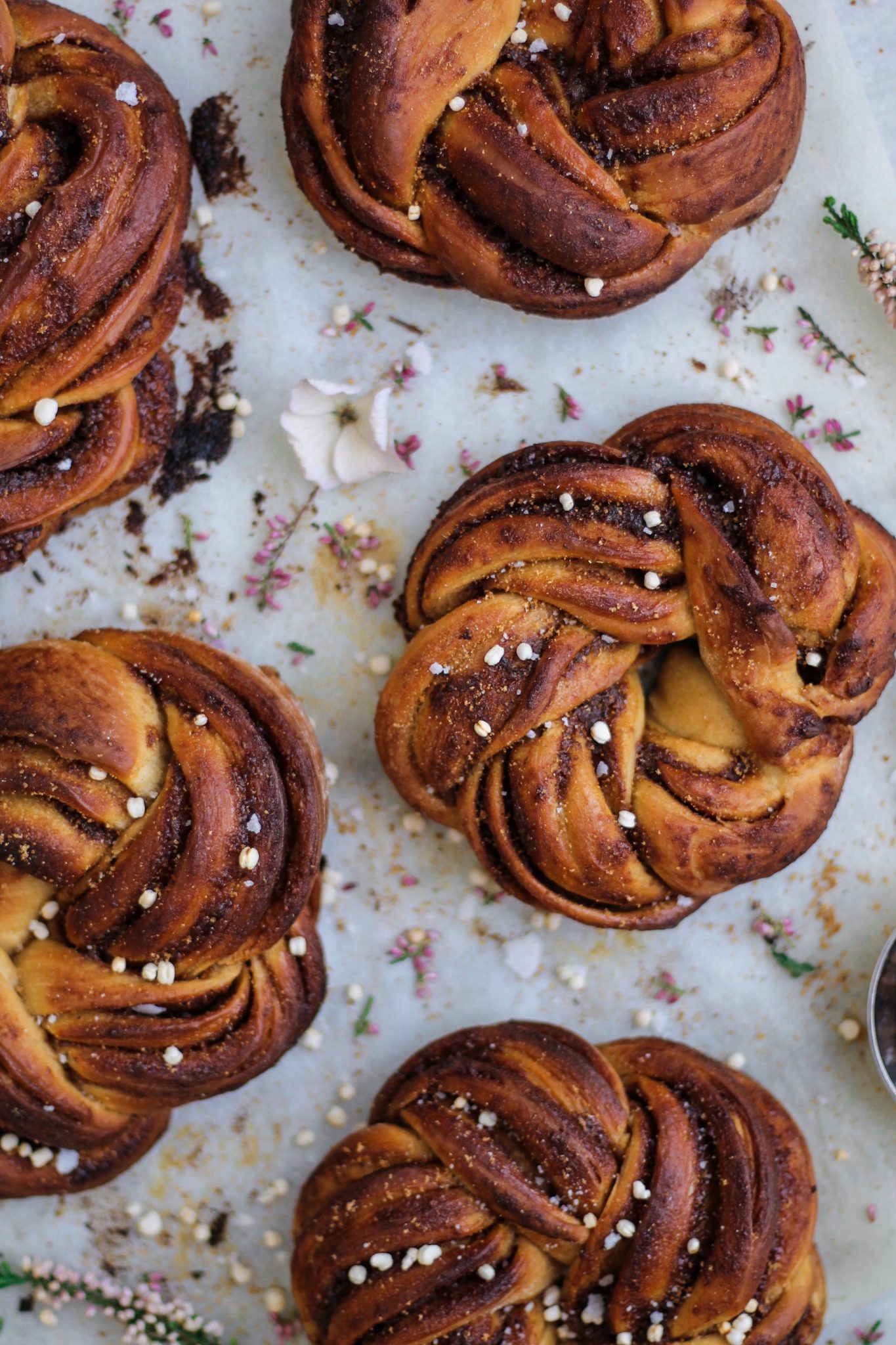 So in a nutshell, I’m here to tell you that:

– YES, you can make these Cinnamon Braid Buns too!

– NO, they aren’t as cumbersome as they look.

– And YES, you can credit yourself a total boss for serving these beauties for breakfast

The dough I used for this recipe came from the Oh She Glows Cinnamon Rolls recipe. The cinnamon sugar filling was a big of an invention. Combining coconut butter, coconut sugar, and cinnamon. Don’t confuse coconut butter for coconut oil here. Coconut butter is the hydrogenated version, and although I like to stick with wholesome/natural ingredients (opting for oil over margarine), it’s important for this recipe to use margarine as we don’t want the dough to get too oily. I tried to find a brand with as few ingredients possible and without palm oil, and found that the Vita’Coco Margarine was my best bet. It worked really well in this recipe.

To make the Vegan Cinnamon Braid Buns I started by making the Oh She Glows cinnamon roll dough, leaving it for one hour to rise, then dividing it into 6 mini dough balls. From there I rolled out each pastry into a thin rectangular shape. I lathered each with cinnamon filling and then rolled them into 6 logs.

From there I cut the logs in half, lengthwise, leaving 1/2 inch at the top uncut. Then I began  braiding the two pieces, trying to keep the sliced side with the exposed layers on top as I braided (this is what makes this braid effect). Finally I pinched the ends together and formed a round wreath. And if that explanation is too confusing the video below is a great play-by-play on how to roll, cut and braid the dough to get the braided effect. I watched it a couple times before trying it myself. You’ll notice in the video they’ve made one large kringle bread, but our mini cinnamon braid buns work just the same. 🙂

Watch the video on how to make Cinnamon Braid Buns. 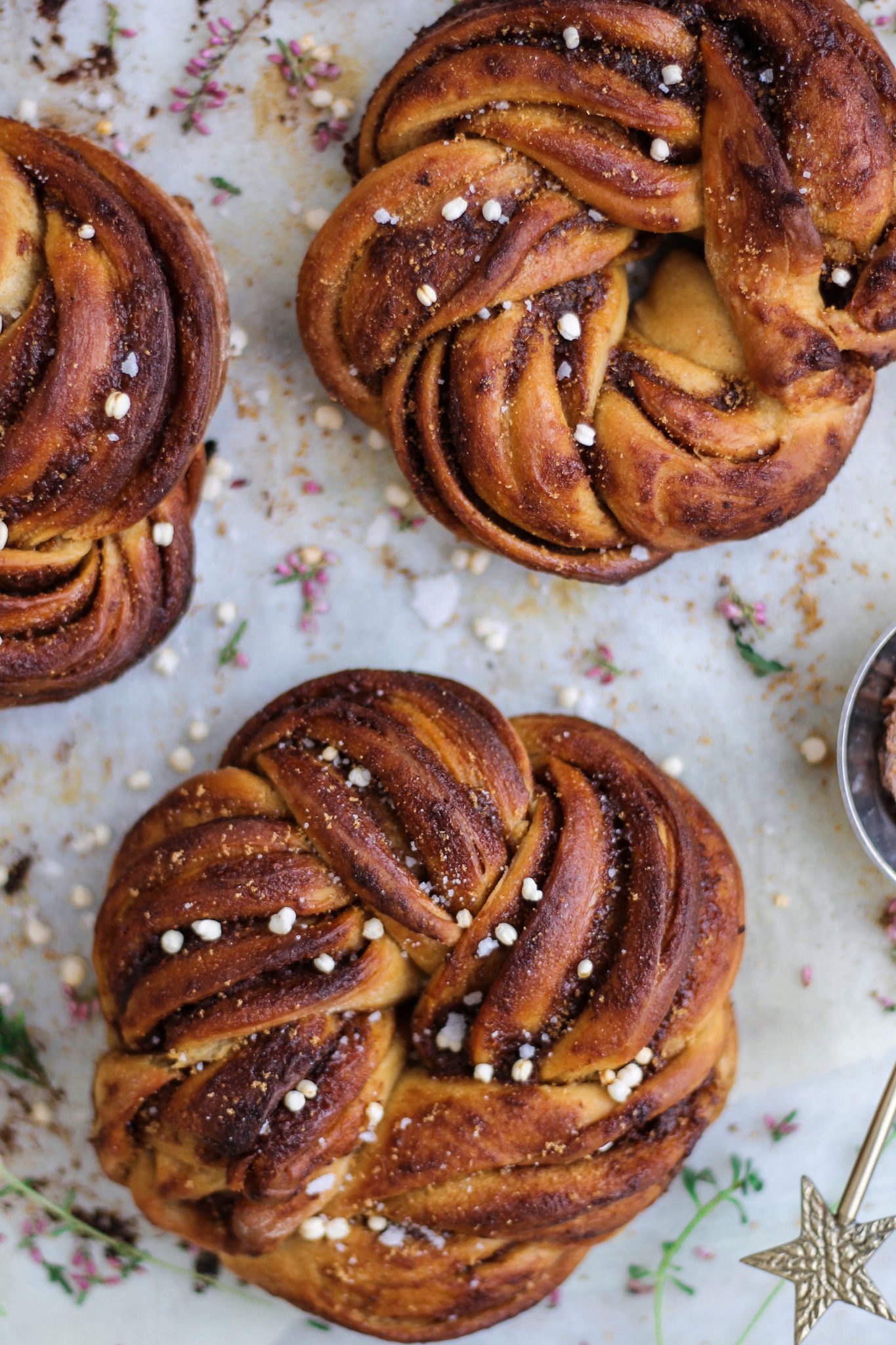 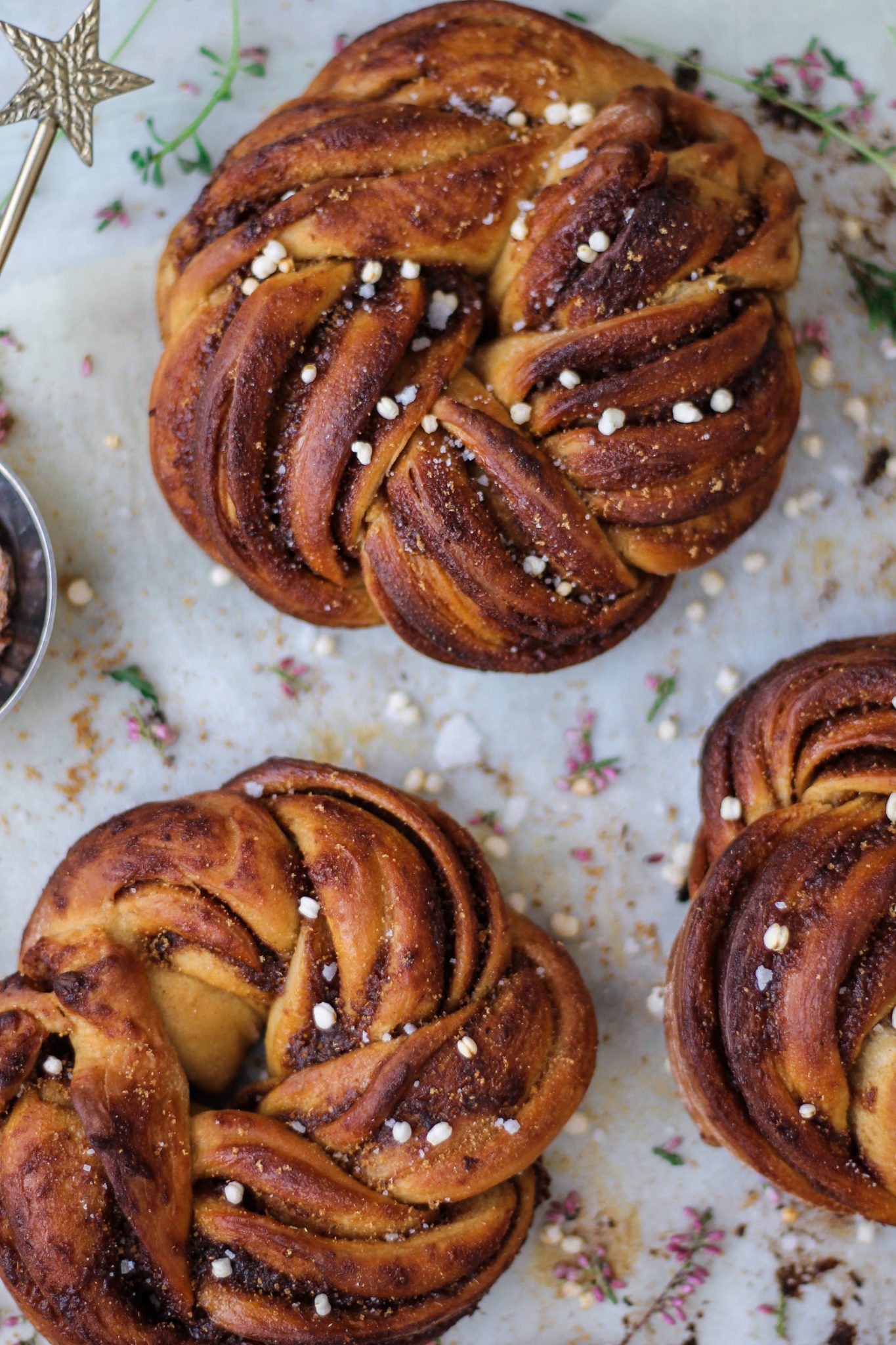 The end result is a cinnamon swirl masterpiece. Truly a breakfast of champions. And the sweet cinnamon flavour is so fitting as we approach the Christmas holidays. Although the recipe makes 6 cinnamon buns, you might want to double it. I’ll admit they didn’t even last 24 hours in our home and it was just the two of us. Every walk by the kitchen would illicit another bite. And when the house is filled with the beautiful scent of freshly baked cinnamon bread it’s hard to ignore!

I strongly urge you to give these Vegan Cinnamon Braid Buns a try. They make for a beautiful breakfast bun, and are fun to prepare. Why not make it a fun holiday get together with friends? It’s a great activity to do along Christmas tunes to get into the holiday spirit. Plus there is no better feeling then pulling out these gorgeous buns from the oven and indulging.  It’s a Christmas miracle at it’s finest I would say. 😉 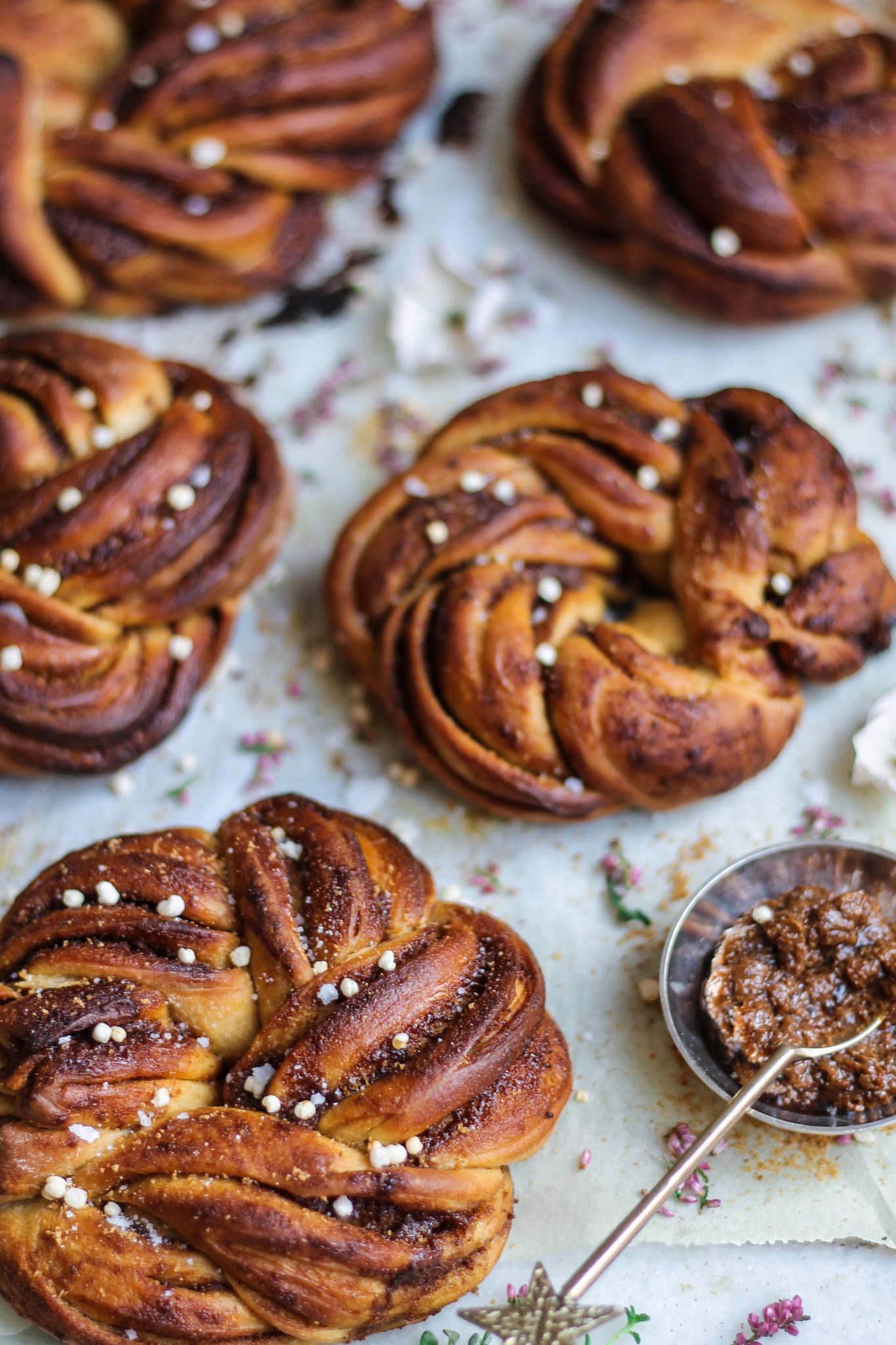 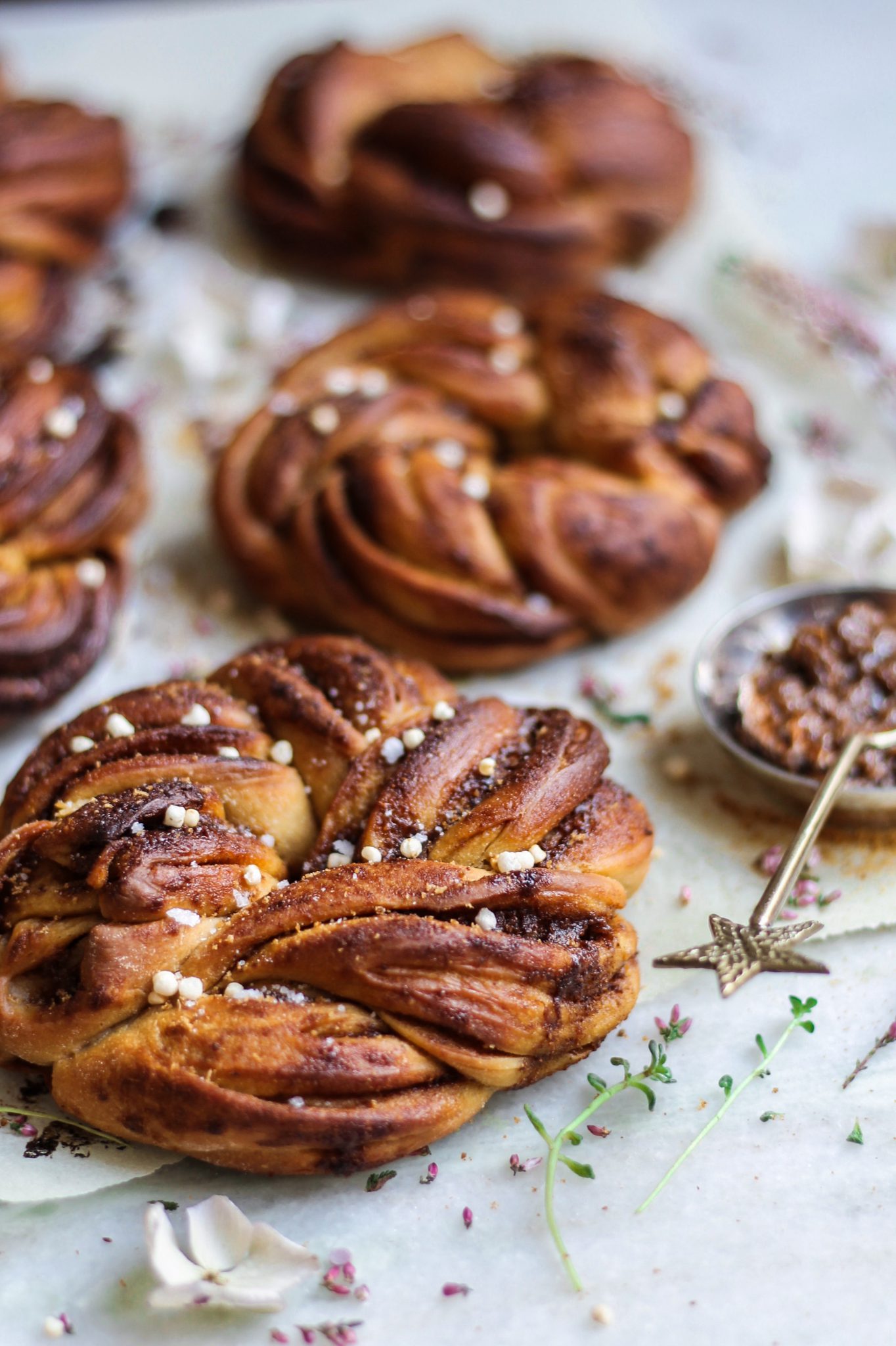 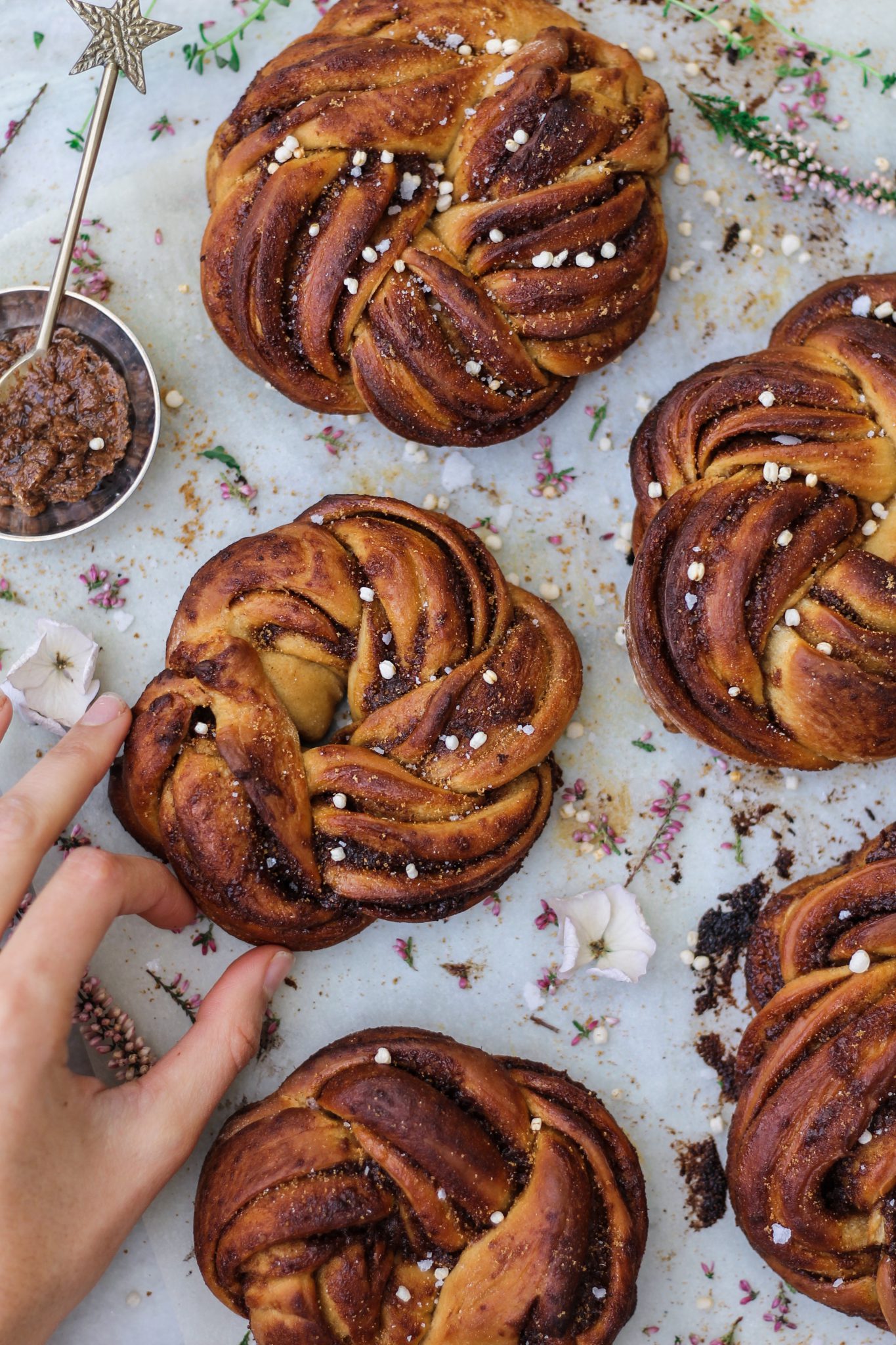 5 from 1 vote
By Hannah Sunderani
These cinnamon buns are braided for a beautiful baked good. Also knows as mini-estonian kringle breads. They are light and fluffy, sweet and cinnamon-y. Enjoy every warm bite.
Print Recipe Pin Recipe

For the Cinnamon Filling:

Cinnamon buns can be frozen. Let cool completely, wrap well and freeze for up to two weeks. Let thaw completely before serving. Optional to pop in oven at 300F/150C for 15 minutes to warm. Nutrition information is a rough estimate.