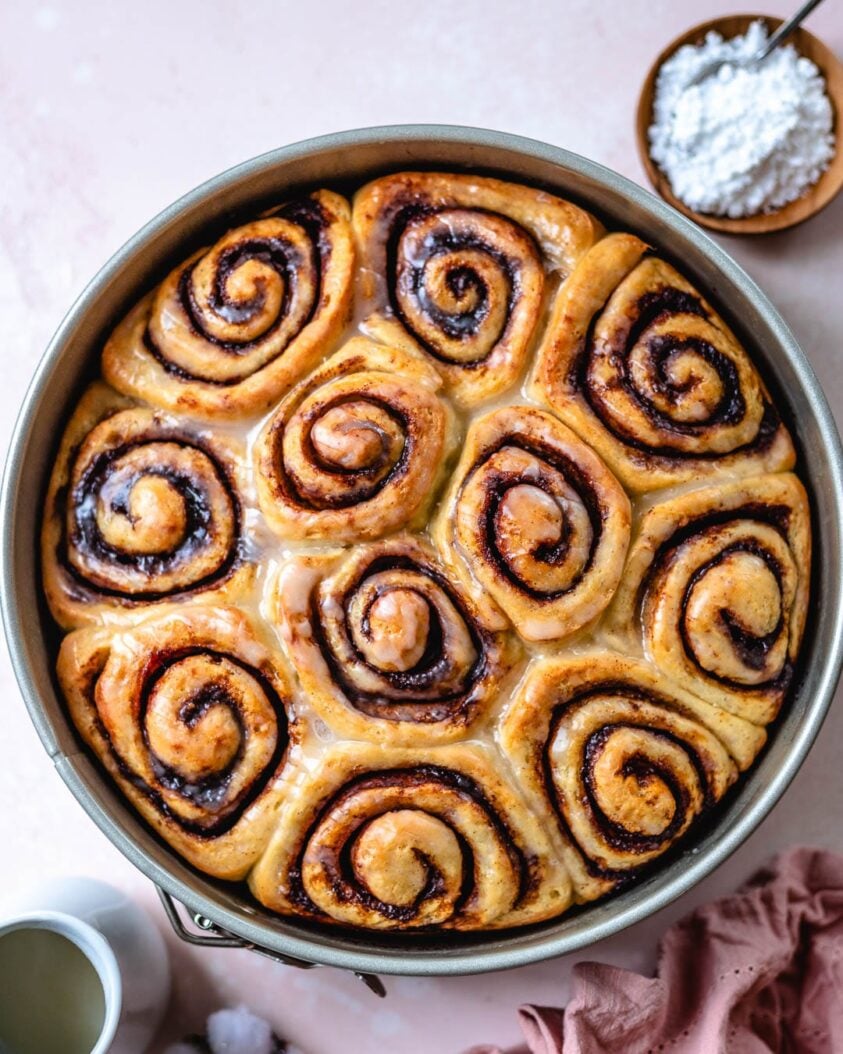 Hi Friends! I am finally sharing my vegan cinnamon rolls recipe! These cinnamon rolls are truly the easiest and best tasting cinnamon rolls you’ll ever try. They are fluffy, gooey, sweet and cinnamon-y with an irresistible icing sugar glaze to drizzle on top.

My family and friends are wild about them and I can pretty much promise you’re going to fall in deep, deep love with these ooey gooey vegan delights!! If you’re not already, this recipe will certainly convince you to go vegan. Absolutely no one will know they are 100% free of eggs, dairy, or animal products of any kind.

Try them this holiday season! Nothing is better than baking with loved ones and inviting the delicious scent of cinnamon and sugar into your home. So cozy, festive and inviting.

Now let me tell you exactly how to make this recipe, so that you can serve them pronto.

These Vegan Cinnamon Rolls are…

How to Make Vegan Cinnamon Rolls

If you are a visual learner, follow along with my how-to video on Episode 2 of Vegan Afternoon with Two Spoons.

To start, whisk together the milk, vegan butter, and sugar in a small saucepan over medium heat.

Once the vegan butter has melted and the mixture is lukewarm, pour it into a large mixing bowl and sprinkle with yeast.

Whisk to combine, then cover with a clean tea towel and let sit until the yeast activates and it looks foamy. After 10 minutes, the yeast should be fragrant and smelling amazing!

Now add in the salt and flour and mix into a dough ball using a spatula. Cover again and allow the dough to proof for one hour, or until almost doubled in size. While you wait, enjoy a hot Almond Milk Matcha Latte or Gingerbread Latte!

Once about doubled in size, add an additional ½ cup flour and knead into a plush dough ball. You’ll know it’s ready when the dough no longer sticks to your fingers and releases naturally from your hands and the bowl. If it is still very sticky, add additional flour.

Sprinkle a clean work surface with flour, then roll the dough into a rectangle about ½ inch thick and about 18×11 inches in size. Slather the rolled dough with vegan butter, then sprinkle with the cinnamon sugar.

Starting with the long edge, roll the dough into a log and cut into 11 equal pieces. Next transfer the cinnamon rolls to a 9” inch cake pan. Make sure to leave some space between them so they have room to expand during the second proof and bake!

Once in the pan, cover for an additional 15 minutes to proof. Bake for 25 to 30 minutes, or until the tops are lightly golden brown and they are nice and pillowy!

Lastly, whisk together the icing sugar and non-dairy milk and drizzle over the hot cinnamon rolls. Serve immediately while warm and gooey!

Follow along with my how-to video, on Episode 2 of Vegan Afternoon with Two Spoons.

How to Make Vegan Icing for Cinnamon Rolls

The icing sugar for this recipe is very simple to make, and it’s what creates the gooey sensation of a classic cinnamon roll. To make, simply mix together 1 cup of icing sugar with 2 to 3 tablespoons of almond milk. The texture should be thin enough to drizzle over the rolls. Feel free to add more almond milk by the teaspoon if it’s too thick for your liking.

However, they can be stored and enjoyed the next day. Wrap any leftover cinnamon rolls individually in plastic wrap and keep at room temperature.

The next day, unwrap the cinnamon rolls and microwave for 10 to 20 seconds, or until soft and gooey again.

I have personally never tested freezing these cinnamon rolls (they simply don’t last longer than a day in our house!).

These cinnamon rolls are best served the same day as baking, for ultra fresh and fluffy texture!

However, they are still tasty the next day. If you have leftovers and want to enjoy them one day later, I suggest to wrap each roll individually in plastic wrap and enjoy the next day. When ready to eat, unwrap and pop in the microwave for 10 to 20 seconds to warm and soften.

(Normally I recomend using reusable wrap, but since these rolls are so sticky – plastic wrap is a lot easier).

If you’re planning to make these vegan cinnamon rolls for the holidays or Christmas morning, you may want to prep them ahead of time for a stress-free morning.

To do so, follow recipe steps 1 and 2, then tightly cover the mixing bowl with plastic wrap and place in the refrigerator to proof overnight. The next morning, bring the dough to room temperature (about 1 hour) before starting. Continue with step 3.

Can I make these vegan cinnamon rolls without yeast?

Unfortunately, no. Yeast is an essential ingredient in cinnamon rolls as it helps rise the dough and is what makes them so light and fluffy!

What is the proper way to knead the dough?

To knead the dough, you want to fold the dough over onto itself, then push the dough down using the palm of your hand. Repeat this step until the dough is no longer sticky. This is another step that may be helpful to watch in my visual tutorial! Subscribe to my Youtube Channel and watch me knead this cinnamon roll dough until plush and doughy.

How hot should my milk and butter mixture be?

You want the mixture to be warm enough to activate the yeast, but not so hot that it will kill it. Around 37C/100F is great! (I always test with my fingers, it should feel like tepid bath water).

So there we have it! The perfect recipe for Vegan Cinnamon Rolls that are sweet, cinnamony, fluffy and ooey gooey. This sweet breakfast treat is truly the best tasting cinnamon rolls recipe you’ll every try, with an icing sugar glaze to drizzle.

Trust me when I say that this will be your go-to vegan cinnamon roll recipe. And, you’d never know it was vegan. I have shared it with so many of my non-vegan friends and they absolutely love it!

I hope you love this these cinnamon rolls as much as we do! If you do make this recipe, please let me know in the comments below what you think! I truly love hearing from you, and I’m always here to answer any questions you might have.

Save this recipe for later! Pin it on Pinterest.

5 from 5 votes
By Hannah Sunderani
These vegan cinnamon rolls are fluffy, gooey, sweet and cinnamony with an icing sugar glaze to drizzle. Easy and simple steps, made with 8 pantry ingredients.
Print Recipe Pin Recipe 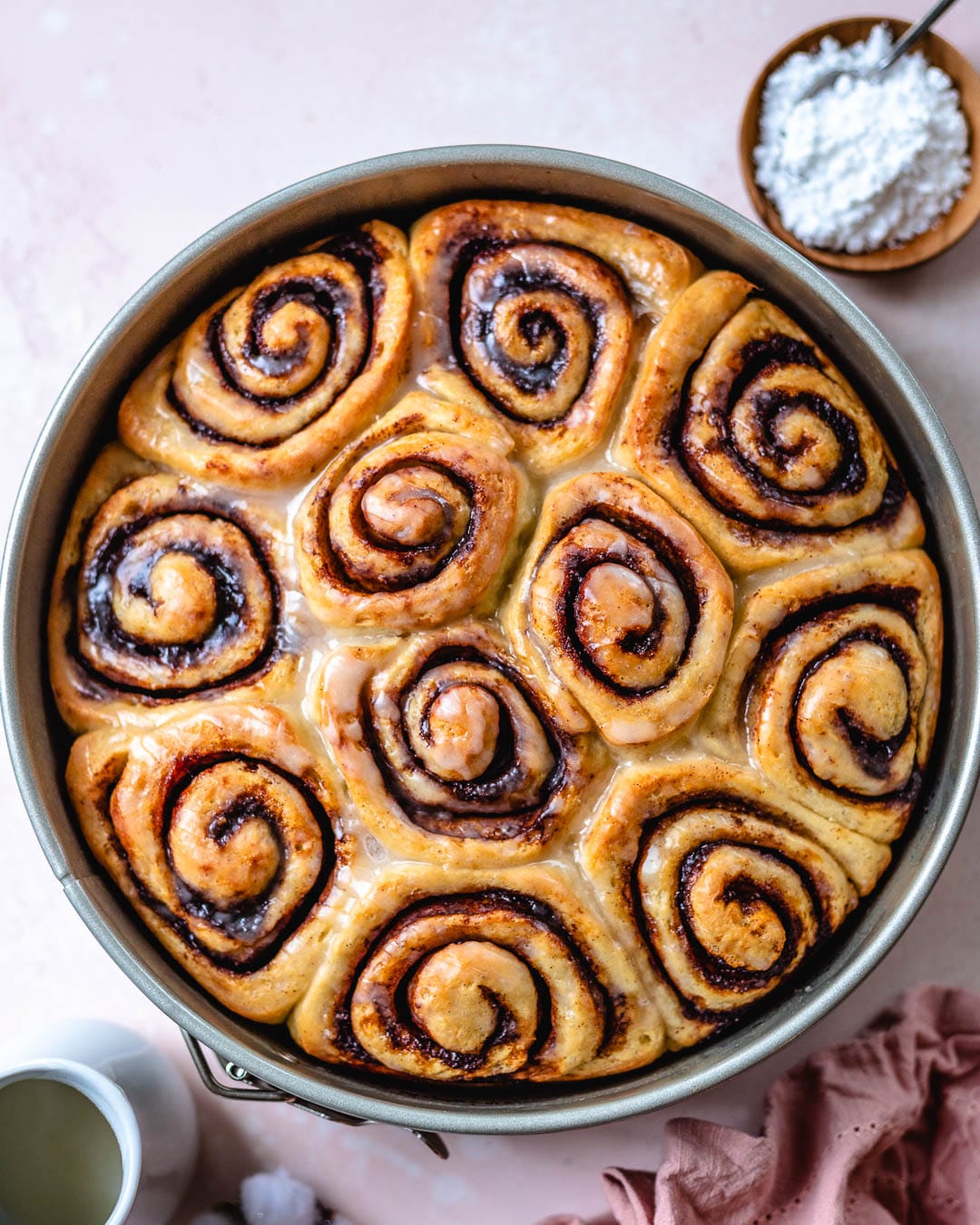