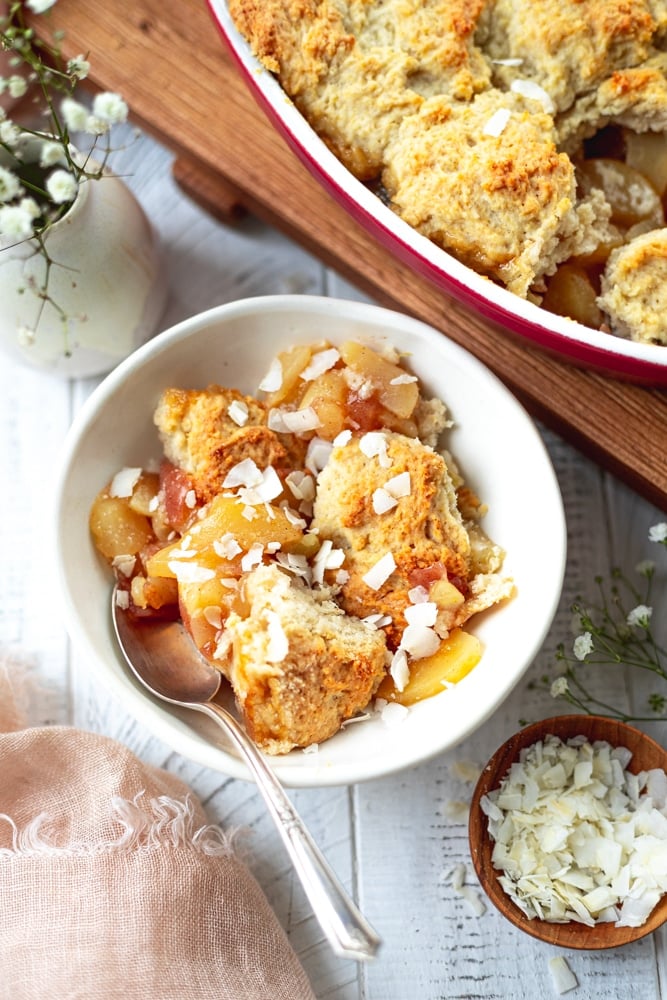 Hi friends! I am really excited to be sharing this pear cobbler recipe with you today! This recipe is one of the easiest dessert recipes to make and it’s so sweet and scrumptious! Made using canned pears for a quick cook-time, the recipe boasts a bubbling, sweet and caramelized filling with a golden buttery biscuit topping.

This recipe is also entirely vegan, although you’d never know it! I’ve served this to my non-vegan friends and family and they absolutely loved it!

Now, let me tell you exactly how to make this pear cobbler recipe so that you can enjoy it pronto!

This pear cobbler recipe is:

It’s no secret that we love fruity desserts in our home, my Strawberry Rhubarb Crumble is a tradition come spring. As well as my Apple Crumble Bars in the fall.

But what I really love about this recipe is that it can be made all year round, using canned pears as the base. Which also speeds up the bake time as it’s using pre-cooked pears.

All-in-all it’s a quick and easy recipe that’s just as scrumptious as a fruity crumble or crisp.

What’s the difference between a cobbler, crumble and crisp?

I feel I must address this very valid question before I get into the recipe. What’s the actual difference between a cobbler, crumble and crisp?

Well, let’s start with how they’re similar… what these desserts have in common is that they consist of a fruity base, that bubbles into ooey-goeey deliciousness when baked.

What makes them different is the topping:

Cobblers: Have a biscuit topping. The biscuits are usually dropped onto the fruit in small rounds, giving it the appearance of a cobbled road – hence the name.

Crumbles and Crisps: Okay, so these are essentially the same thing. Confusing right? The name “crumble” or “crisp” is depends on the country of origin. “Crumble” is more commonly referred to in England, while “Crisp” is what they call it in North American (U.S. and Canada). Both contain fresh fruit with a crumbly streusel-like topping (often made with oats), which is baked until the fruit is cooked and bubbling.

How to make Pear Cobbler:

Lucky for you, this pear cobbler is SO easy to make! We’ll start by preparing the filling and topping in separate bowls.

The filling for this recipe uses canned pears, which speeds up bake time tremendously so that you have a bubbling, crispy and golden cobbler in just 30 minutes!

To make the filling: Combine the cane sugar, corn starch, cinnamon, salt, lemon zest lemon juice and vanilla extract. Whisk to combine. Pour in the pear slices and gently stir everything to combine. Pour into your baking dish and set aside.

Now for the biscuit topping! I like to describe the taste and flavour of the topping similar to a scone! It’s light, airy and biscuit-like. Made similar to a scone as well by combining flour, vegan butter, sugar, salt and baking powder.

Pour the crumbly dough in a small mixing bowl, make a well in the middle and pour in the coconut cream. Fold together to combine.

Once you have your filling and topping made, you can combine them.

Scoop heaping tablespoons of the cobbler topping over the pear filling in an 8×11-inch baking dish.

The goal is to scoop round tablespoons of the filling to make a cobble road pattern which gives the cobbler its infamous name!

Bake in the oven until the top is golden brown and the sides are bubbling, 35 minutes.

And that’s all there is too it! I told you it was an easy recipe. And you’d never know it given how sweet and scrumptious it is.

So there we have it. An incredible simple, sweet and scrumptious pear cobbler recipe with a bubbling caramelized filling with a golden buttery biscuit topping! I really think you’re going to love this recipe as much as we do!

And, if you do make this recipe please let me know in the comments below what you think! I truly love hearing from you, and I’m always here to answer any questions you might have. 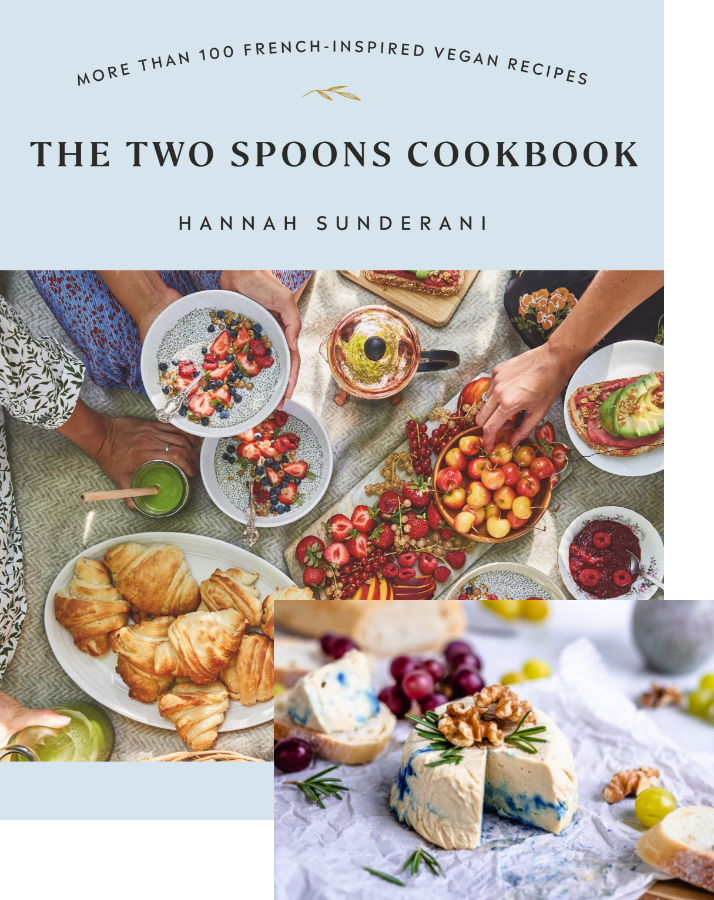 The
two spoons cookbook
is here!