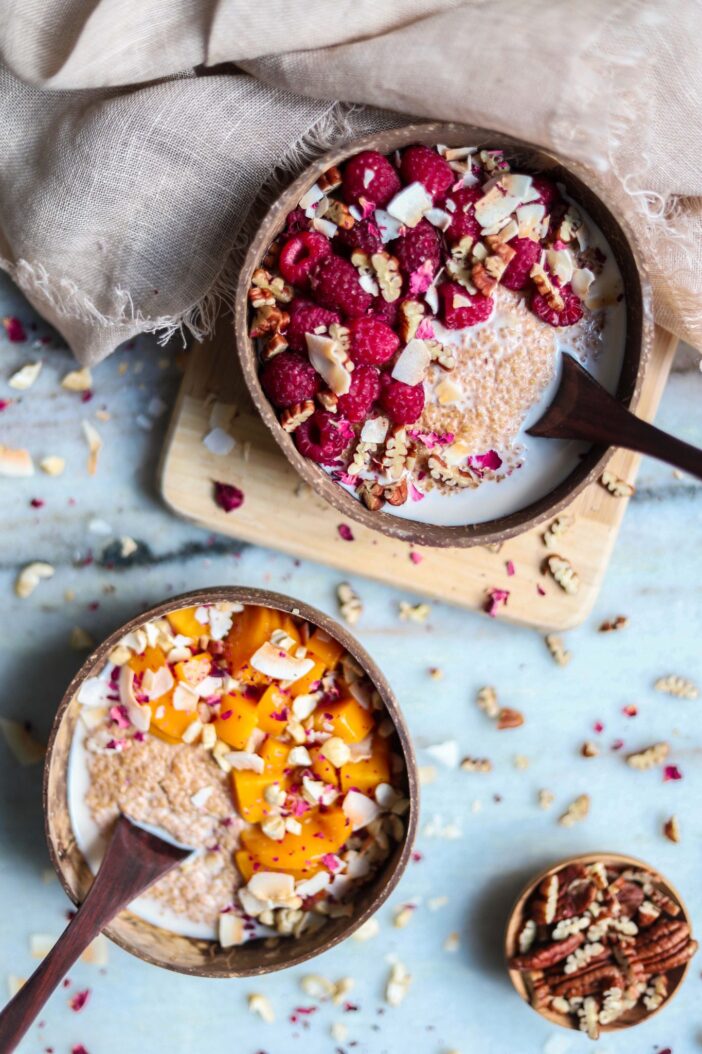 This quinoa breakfast bowl recipe uses gluten-free quinoa as an oat substitute and coconut milk for an irresistible, creamy texture. Made stovetop, this quinoa porridge is one of my very favourite quick and easy vegan breakfast recipes.

In fact, these Creamy Quinoa Porridge bowls are SO good that it felt a crime not to share them with you! I have been eating this quinoa breakfast porridge on repeat, and I just can’t seem to get enough of its lush and creamy flavour.

Quinoa porridge is a great substitute for oatmeal. A must-make if you’re looking to swap up your traditional oat-based porridge for something new. It’s certainly one of my favourite vegan breakfast recipes here on the blog.

This quinoa breakfast bowl is vegan, gluten-free, dairy-free, and soy-free. Plus, the whole recipe comes together in 20 minutes!

So, let me tell you exactly how to make this delectable quinoa breakfast bowl so that you can enjoy it pronto!

If you’ve only ever used quinoa for savoury dishes then boy are you in for a treat! Quinoa can absolutely be used in sweet recipes like this delicious quinoa breakfast bowl.

I used to have quinoa porridge a lot in my early 20s. At the time when I was gluten-free. (Since then I’ve reintroduced oats back into my diet, often defering to overnight oats.)

BUT recently I wanted a switch-up and remembered how this wondergood seed could play a star performance in our breakfast bowls too!

In fact, this recipe is so good that I created a similar version for The Two Spoons Cookbook. But for now, you can enjoy a taste of what to expect in the cookbook with this irresistible bowl.

What’s a good substitute for oats?

Quinoa is a great substitute for oats! Not only is it gluten-free, but it’s high in protein and can be used to make both sweet and savoury dishes.

I really love to use quinoa as a substitute for oats because of its higher protein content, and also because it has a lovely nutty taste!

There is just something about quinoa porridge that feel so elevated! Like something you’d order from a chic hotel while on vacation. Cooked in coconut cream, drizzled with a bit of maple syrup and topped with fruits. It doesn’t get more dreamy.

Alternatively, you can substitute oats with quinoa flakes in cooking and baking. However, I find that quinoa flakes are a little trickier to find – usually only available at specialty stores. So personally, I prefer to use traditional quinoa as a substitute for oats in porridge recipes – it’s easy to use, tastes delicious, and is protein-packed!

Yep, quinoa is gluten-free! Which is great news if you are celiac, or cooking for someone who is celiac.

In fact, oats are naturally gluten-free too… but since they’re often manufactured in the same facility as wheat, they are typically not “certified gluten-free.” (This is fine if you avoid gluten in your diet, but not fine if you are celiac or have any sort of severe allergy to gluten!).

Quinoa is naturally 100% certified gluten-free. Which again makes quinoa a great substitute for oats – and this quinoa breakfast bowl a true winner!

Yep, quinoa is vegan! In fact, us vegans love this healthy grain because it’s rich in protein, which makes it a great addition to our diet – since meat-based and dairy-based proteins are off-limits.

Many recipes online, however, incorporate animal-based ingredients into their quinoa recipes, turning it from a naturally vegan ingredients to a not-so-vegan dish.

The process of making quinoa porridge is much like making oatmeal.

In a nutshell, we are going to combine quinoa with coconut milk and bring to a simmer on the stove top (just as we would with oats and milk). Adding some cinnamon for flavour and maple syrup for sweetness.

The difference, however, between cooking quinoa vs. oatmeal is in the cook-time.

When using old-fashioned rolled oats to make oatmeal; the cook-time is around 5 to 7 minutes. Whereas with quinoa porridge, the cook time is a little longer; around 12 to 15 minutes.

That said, the length of time to make oatmeal depends on the type of oats you’re using. For example, steel cut oats (which would be most similar to this quinoa porridge in terms of nutty taste and chewy texture) takes 25 to 30 minutes to cook on the stove top.

So, actually – when comparing cooking quinoa to steel cut oatmeal – not only is the method the same, but the cook time is faster!

Can I use red quinoa for quinoa porridge?

Yes! You can absolutely swap red quinoa from white quinoa to make this recipe. In fact, I personally LOVE red quinoa and often make this quinoa porridge using red quinoa.

There is a slight difference in taste and texture when using red quinoa vs. white quinoa.

Red quinoa is a little more crunchy and nuttier than white quinoa, and it’s slightly chewier.

As a result, I find the overall taste/texture of quinoa porridge when using red quinoa perfect for more mature palates (a.k.a great for adults, but maybe not kids).

Can this recipe be prepared in advance?

Absolutely! In fact, I love preparing this quinoa porridge the night before to enjoy in the morning. You can even double or triple the recipe. Transfer to an-tight containers and keep in the fridge to enjoy throughout the week.

How long does this recipe keep?

This quinoa porridge will keep for up to 5 days. Store in the fridge in an air-tight container.

How to reheat quinoa porridge

On the stove: In a saucepan, reheat the quinoa porridge on the stove top with a splash of water to thin. Warm on medium heat, stirring often, until desired temperature.

So there we have it! A delicious recipe for quinoa porridge that’s a great substitute for oatmeal! Made with quinoa and coconut milk, it’s irresistibly creamy and so lush! Ready in 20 minutes, you will be making this quinoa breakfast bowl on repeat.

If you do make this recipe please let me know in the comments below what you think! I truly love hearing from you, and I’m always here to answer any questions you might have.

5 from 2 votes
By Hannah Sunderani
This quinoa breakfast bowl recipe uses gluten-free quinoa as an oat substitute and coconut milk for an irresistible, creamy texture. Made stovetop, this quinoa porridge is one of my very favourite quick and easy vegan breakfast recipes.
Print Recipe Pin Recipe

Nutrition information is a rough estimate. 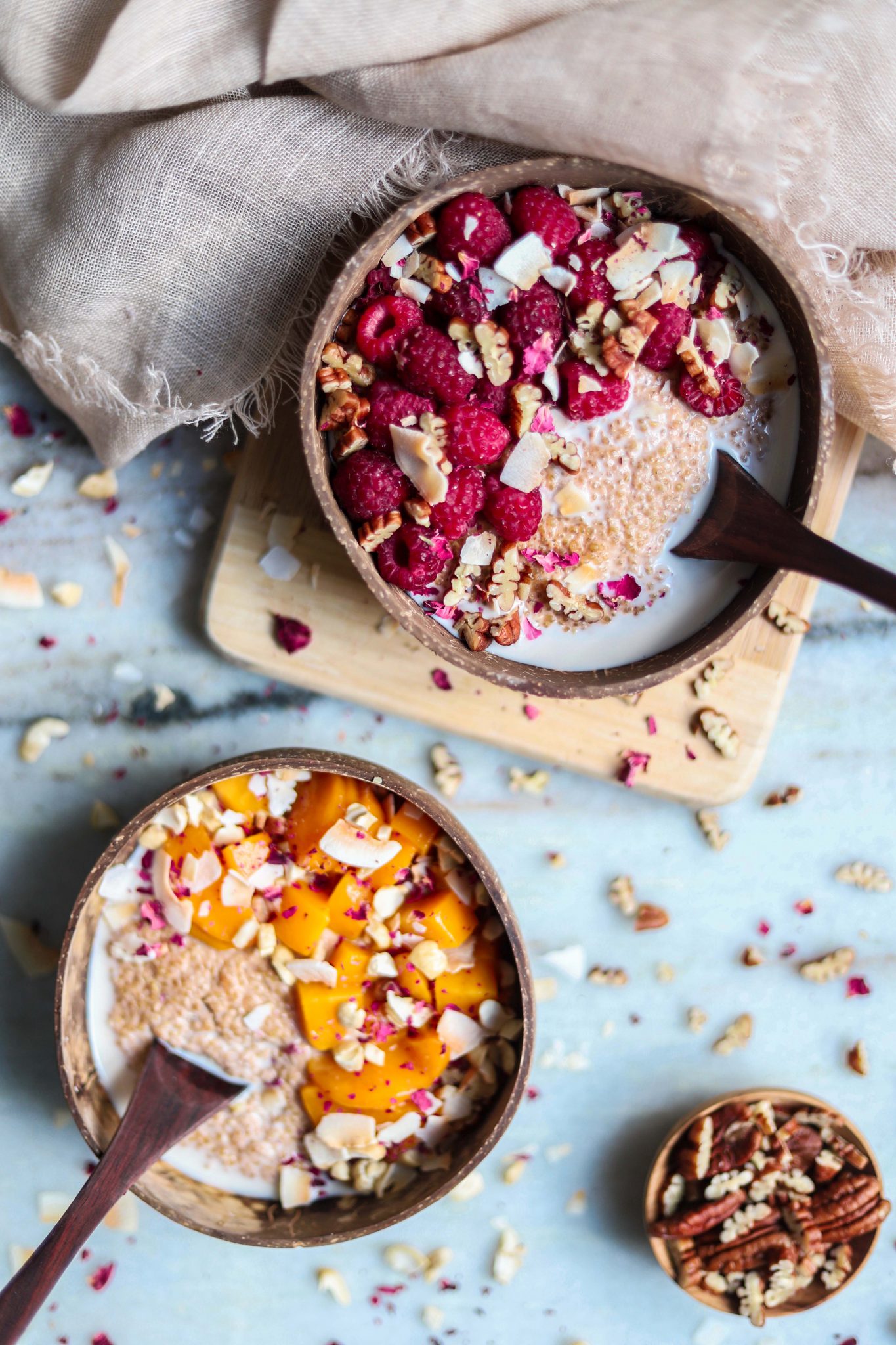