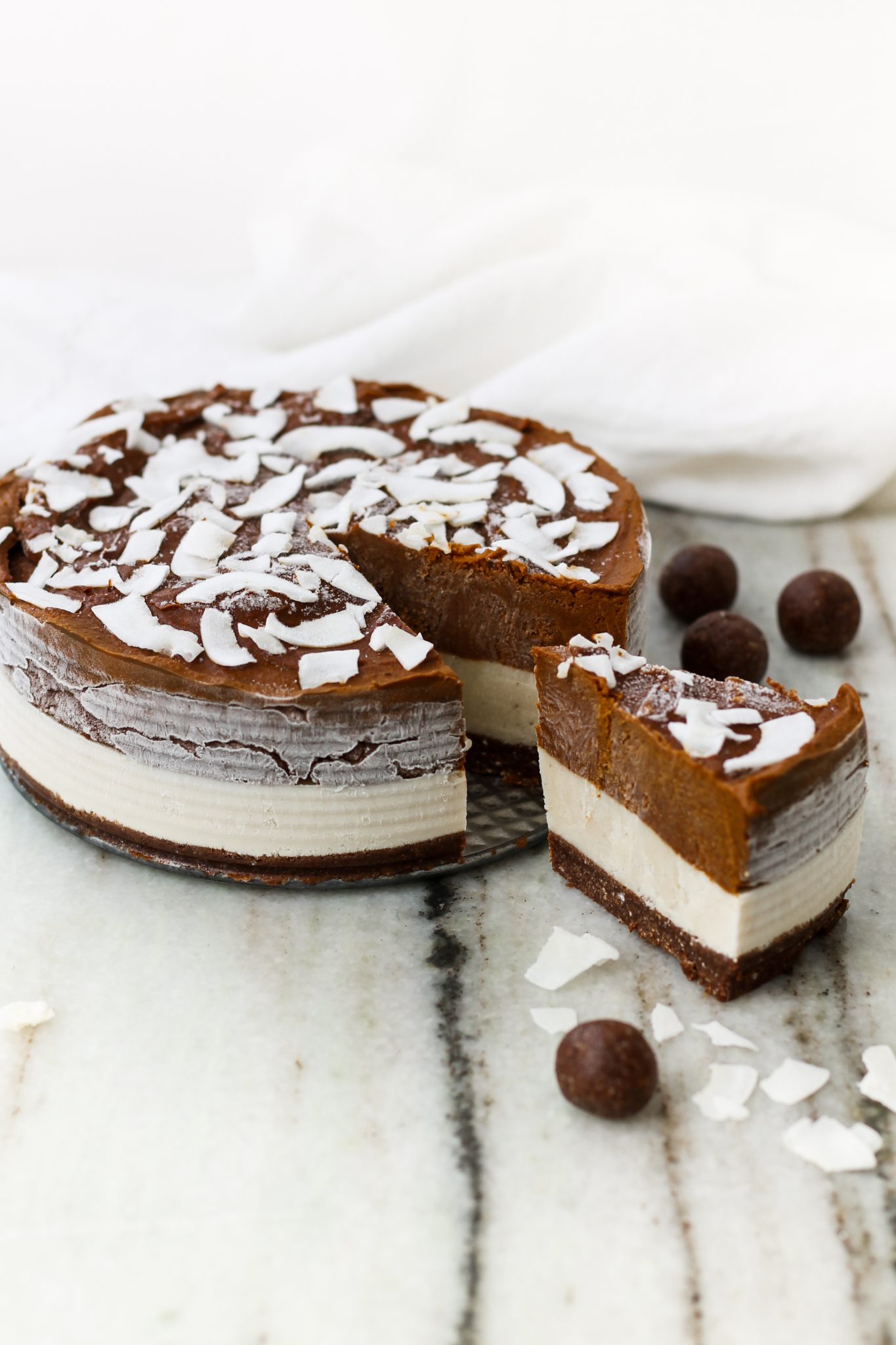 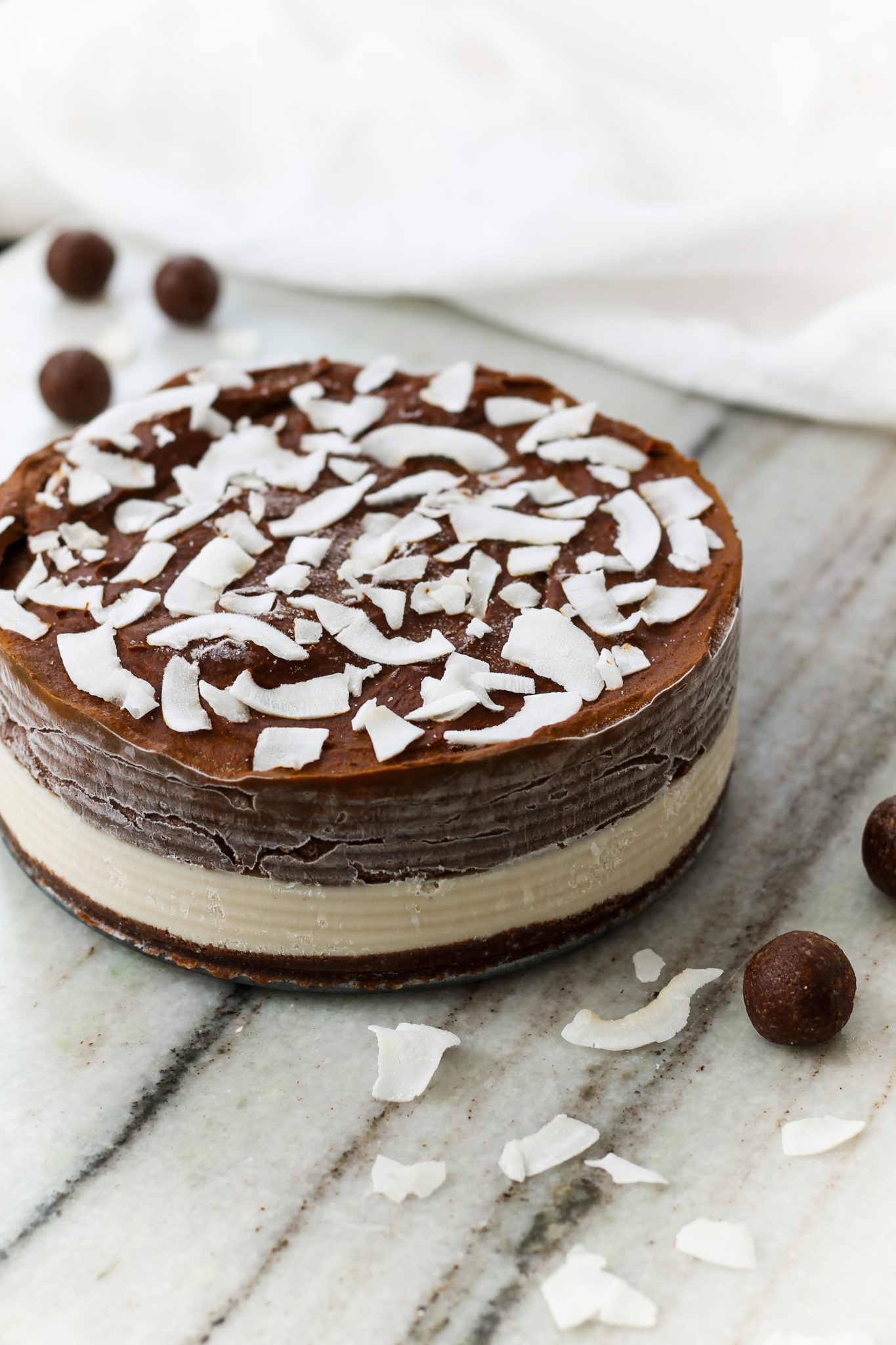 Happy Thanksgiving Everyone! That is, if you’re Canadian! Thanksgiving is the holiday that makes me the most homesick because it’s my favourite one of all. Which is no surprise given it’s all about FOOD. I love everything this holiday represents: coming together with our loved ones to share the joy of cooking, and being thankful to the harvest and the foods that nourish our bodies. And then going into severe comatose from stuffing ourselves with it! So, knowing that our family and friends over in Canada are all enjoying this Canadian celebrating sends a little pang of sadness to be missing the occasion. (And a big pang of FOMO).

But I’ve learned the best form of therapy is CAKE!  Serve me a slice of this and happiness consumes me like a cat under the windowsill. It’s no wonder they serve cake for birthday’s – it doesn’t matter how old you’re turning you can’t resist the joy of homemade cake.

And this thanksgiving themed chocolate pumpkin cheesecake is no exception to the rule. It’s a delicious vegan dessert that will not only have you in complete bliss, but your loves ones as well. And you can trust me, because I’ve tested it! This past weekend we had a big Canadian Vegan Thanksgiving with our friends and they were in awe of both the look and taste of this pretty pumpkin cake. It begins with a chocolate oaty-almond crust, with a layer of vanilla cashew cream in between, and topped with a chocolate pumpkin pie filling. And if the pretty layers didn’t already have you swooning it’s the taste that soars us into bliss! Taking advantage of our favourite fall flavours, a slice of this vegan cake brings out flavours of pumpkin spice, cinnamon, cream and cocoa . It’s utterly delicious! 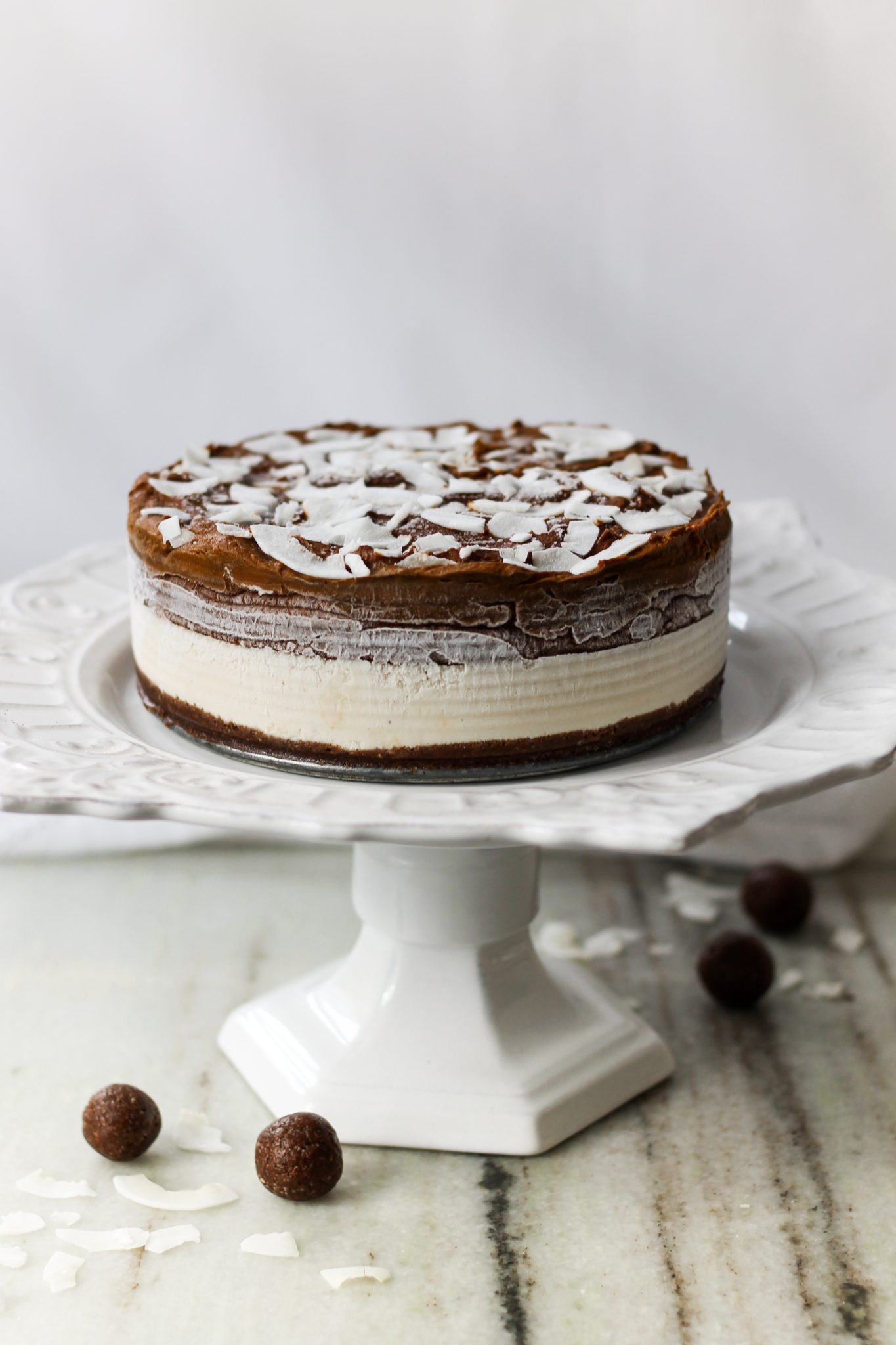 In our household, Thanksgiving wouldn’t be the same without a pumpkin dessert. My husband, Mitch, is the biggest pumpkin pie fan I’ve ever met.  The reaction received when you give him a pumpkin pie is like watching someone win a new car on The Price is Right. Every year my mum makes him his very own pumpkin pie, (and a smaller version for everyone else to share). And yes, I know that technically this dessert isn’t a pumpkin pie, per se, but there was no doubt in my mind that this pumpkin treat would be well received by hubby.

I won’t lie that I was nervous to serve this chocolate pumpkin cheesecake to our friends, however, hoping they’d enjoy vegan frozen desserts as much as we do. It’s easy to get accustomed to our own taste preferences eating vegan desserts at the time. So opening the tasting pool to non-vegan friends was the ultimate taste test. …

So here I was, at Thanksgiving dinner on saturday night, cake in hands, and waiting for the verdict: Upon first bite my guests were totally silent! They must have been quiet for 10 seconds, which in chef time feels like an eternity. I had the biggest pit in my stomach believing it must taste horrible, and that my guests were wondering how to stomach eating the rest without offending me. Turns out, the brief moment of silence was because they were blown away and didn’t know what to say! The remaining minutes ensued with questions about how to make it, how long it takes, where to buy the ingredients, and whether I was sure I didn’t buy it from a patisserie. What a relief!

So I’m here to break the silence by saying that this Chocolate Pumpkin Cheesecake is vegan-skeptic approved! A recipe that will delight the likes of both vegan and non-vegans alike.

Now that’s something to be thankful for.

Wishing everyone the happiest Thanksgiving! 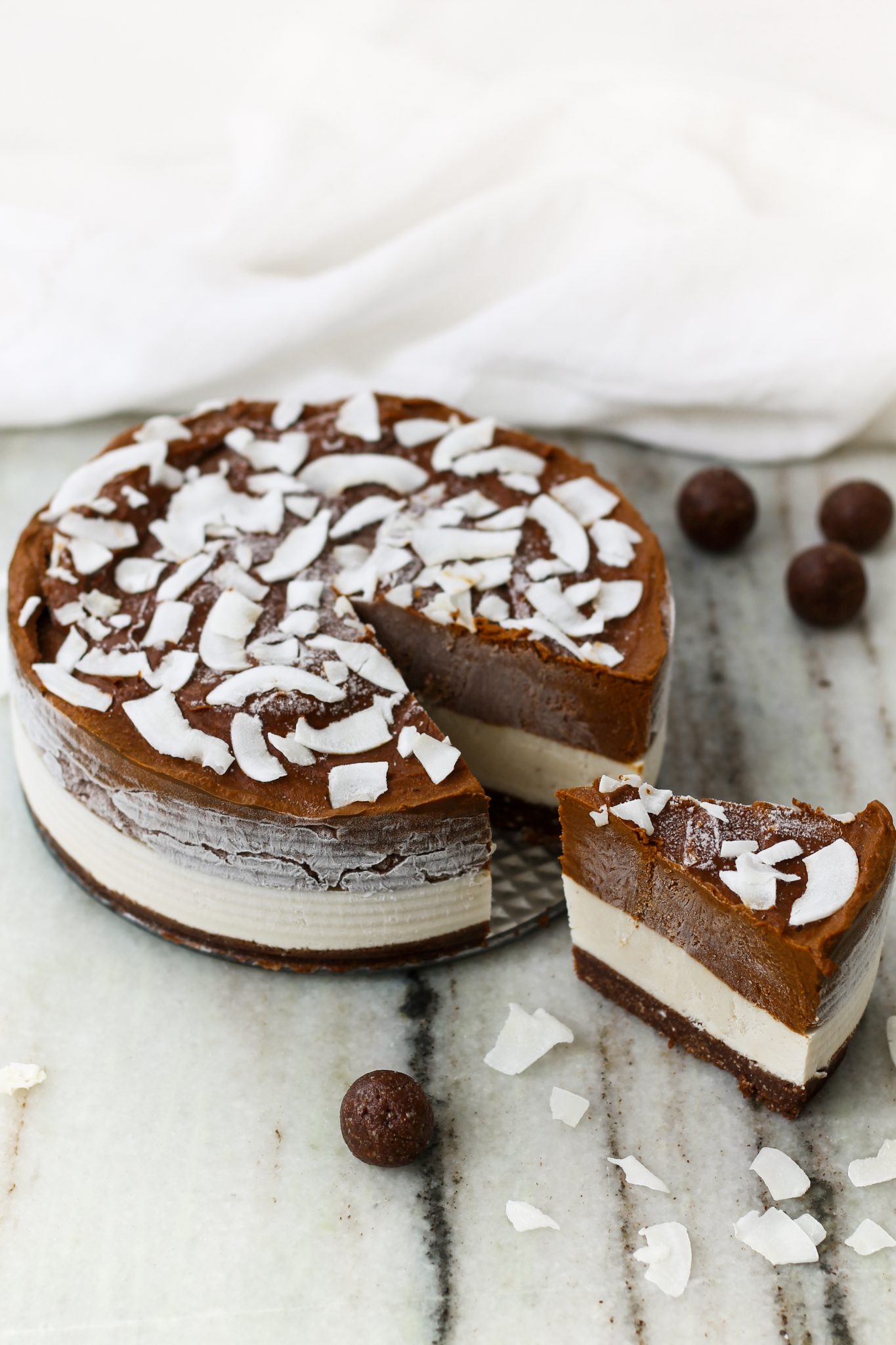 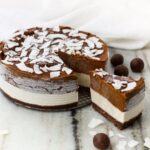 It begins with a chocolate oaty-almond crust, with a layer of vanilla cashew cream in between, and topped with a chocolate pumpkin pie filling. And if the pretty layers didn't already have you swooning it's the taste that soars us into bliss! Taking advantage of our favourite fall flavours, a slice of this vegan cake brings out flavours of pumpkin spice, cinnamon, cream and cocoa . It's utterly delicious!
Category Dessert
Cuisine gluten-free, no-bake, raw, refined-sugar free, soy-free
Prep Time 1 hour
Freeze time 4 hours
Total Time 5 hours
Servings 10 slices
Author Hannah Sunderani

Cheesecake will keep in freezer for up to two weeks.  Nutrition information is a rough estimate. 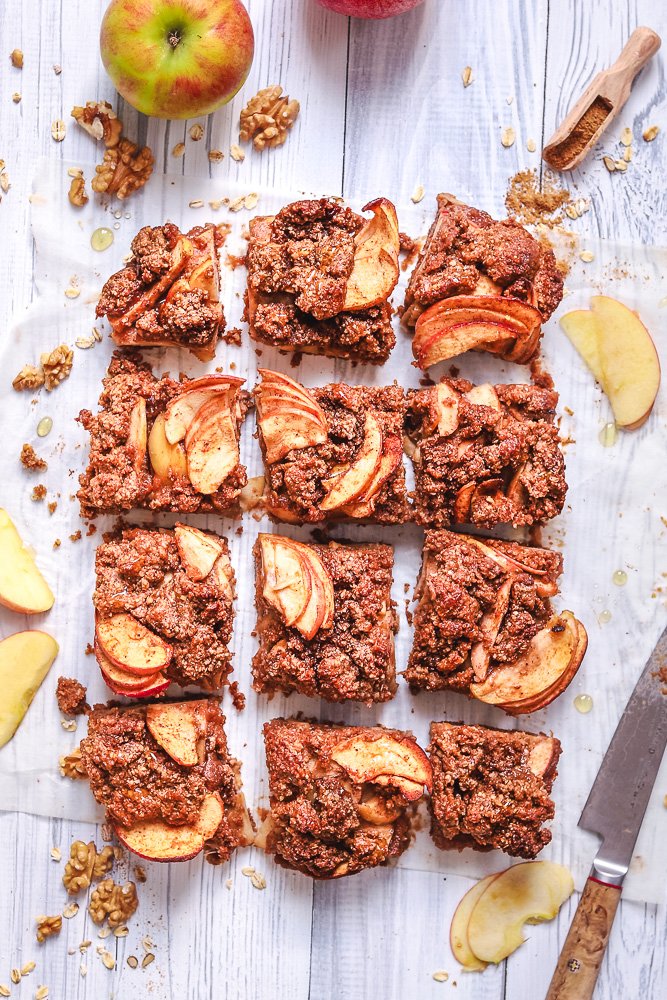 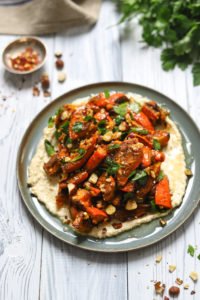 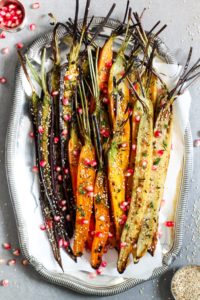