You are here: Home / Everything / Recipes / Breakfast / Christmas Cinnabun Wreath 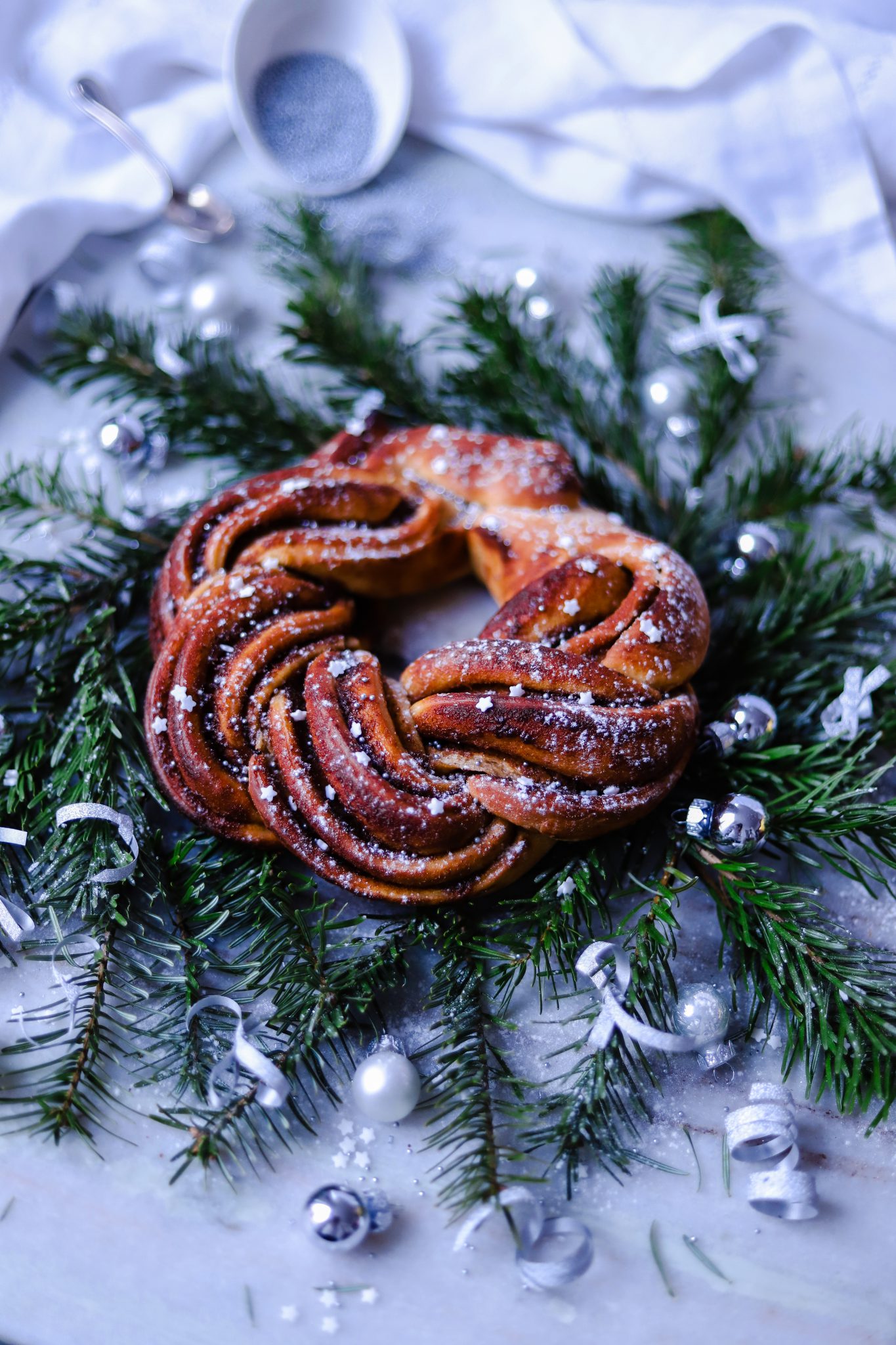 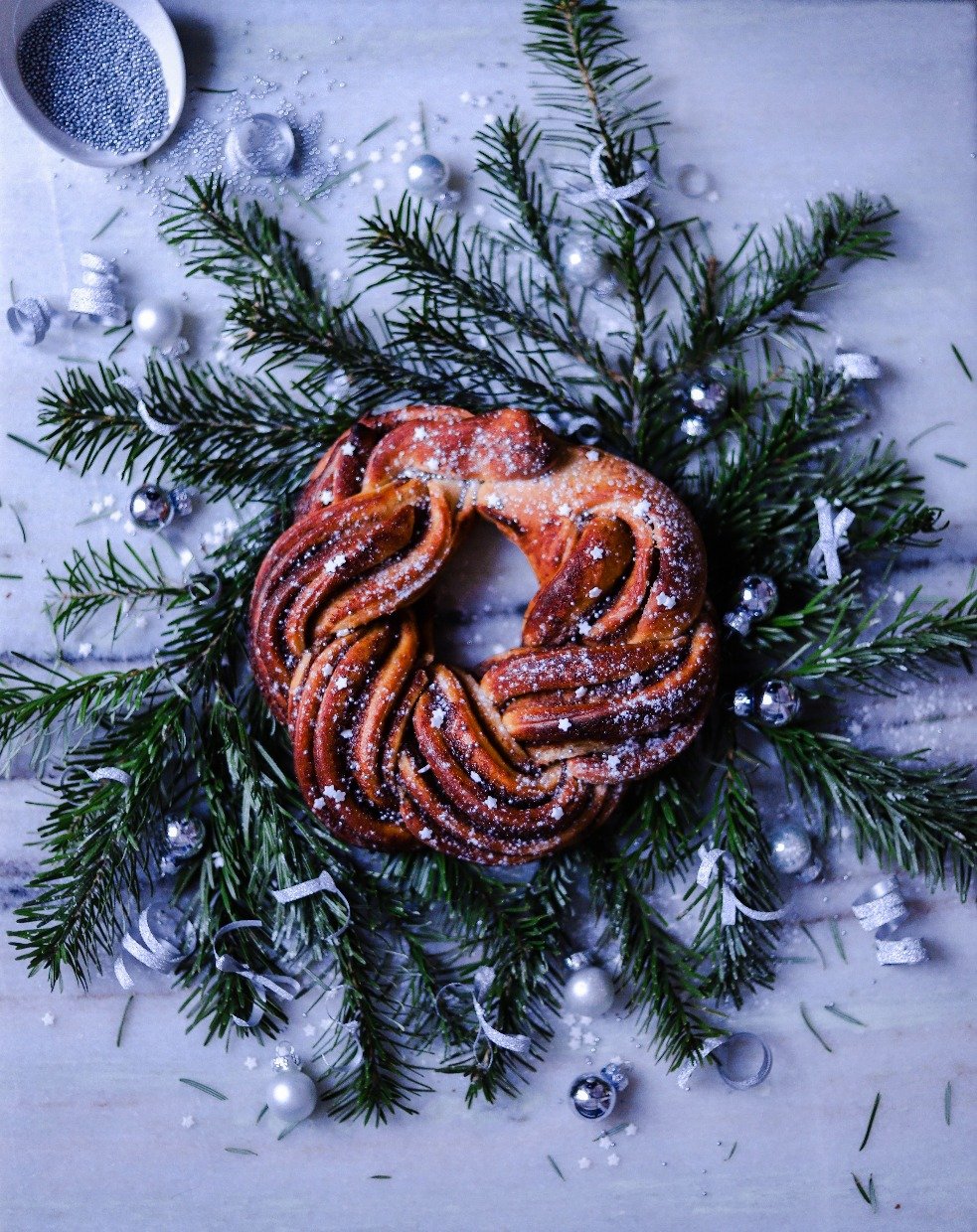 What’s better than a festive wreath for Christmas? An edible one! Say hello to this stunning Christmas Cinnabun Wreath, which I made using my vegan cinnamon braid bun recipe. Oh come let us adore it! This puts me in the holly of jolliest moods for Christmas.

I truly find that there is something magical about freshly baked cinnamon bread that fills the air with Christmas cheer during the countdown to the holidays. The smell of freshly baked bread and sweet caramelized cinnamon sugar just screams “tis the season!” All we’re missing is a glass of hot wine in hand. But this one is for all the ages to enjoy, from young to old, there is plenty of Christmas cheer to spread in this pretty Christmas Cinnabun Wreath. 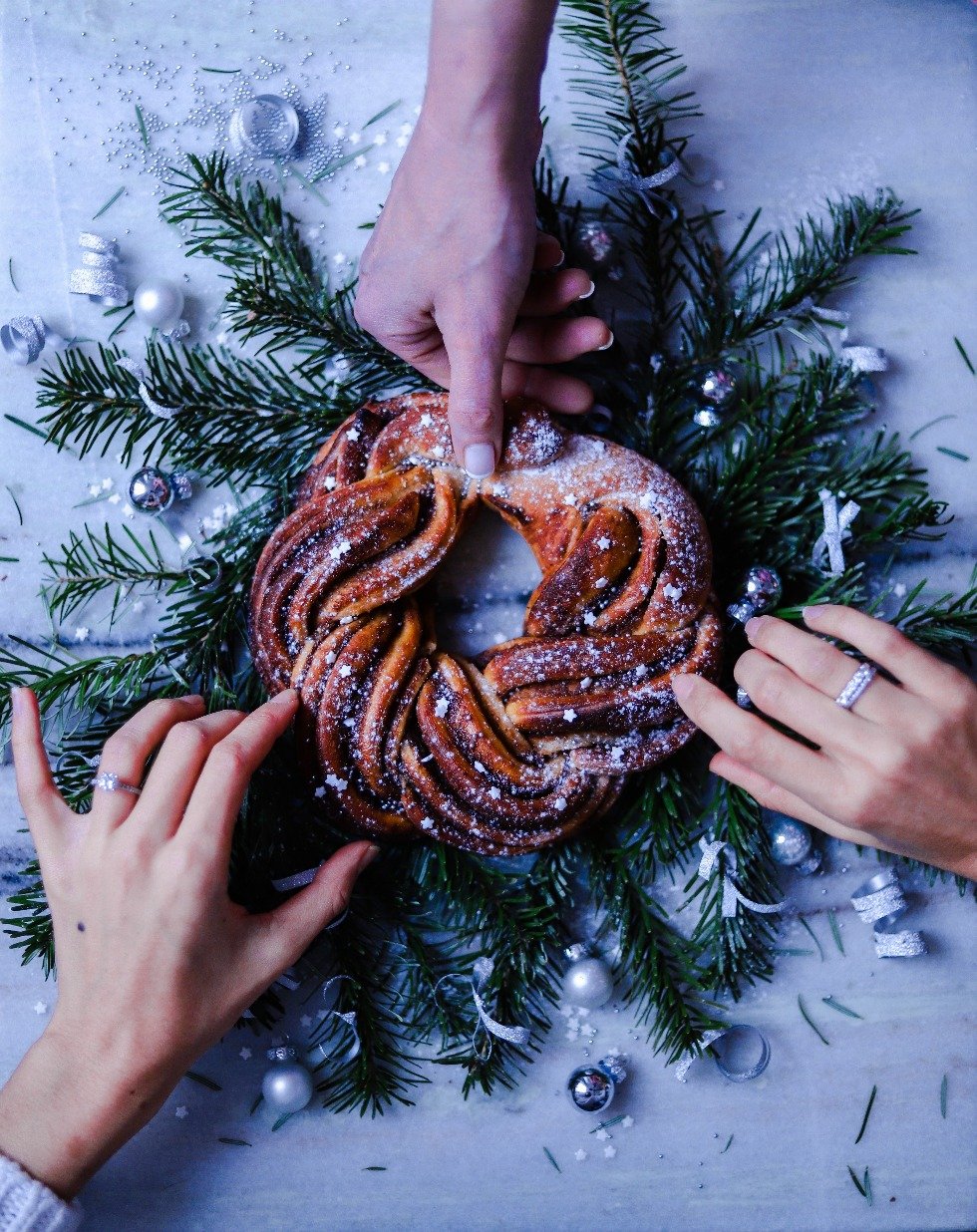 Made just like my cinnamon braid bun recipe, but instead of dividing the dough into 6 mini buns, I’ve only divided it into two, to give me two big beautiful wreaths. Actually, making two buns instead of one was strategic on my part, so the family could eat one fresh while I could shoot the other one for the blog! (Talk about will power on my part! You’ve no idea how many times I wanted to lean down and lick it!). I had actually learned this lesson of having a spare bun the last time I made my Cinnamon Braid Buns. I had made the mistake of making them after dinner, and needed to wait until the morning to shoot them in natural light. I was definitely in the dog house when hubby found out he couldn’t have one until after I’d shot my photos. #bloggerhubsandproblems.

I also found that making two wreaths out of the dough offered the perfect sized wreaths.  It was just easy enough to handle transferring from my work station to my baking tray. And one wreath can easily satisfy four people. Plus making two wreaths means you can gift the other (that is if you can muster the strength to separate from it), but they say Christmas is about giving, right? And if you’re into homemade presents this will certain put a smile on your loved ones face. I loved to see the huge grin and “mmmm’s” from my mum and husband as they tucked into this sweet treat. I think Mr. Grinch learned it right, “maybe Christmas doesn’t need to come from a store. Maybe Christmas means a little bit more.” 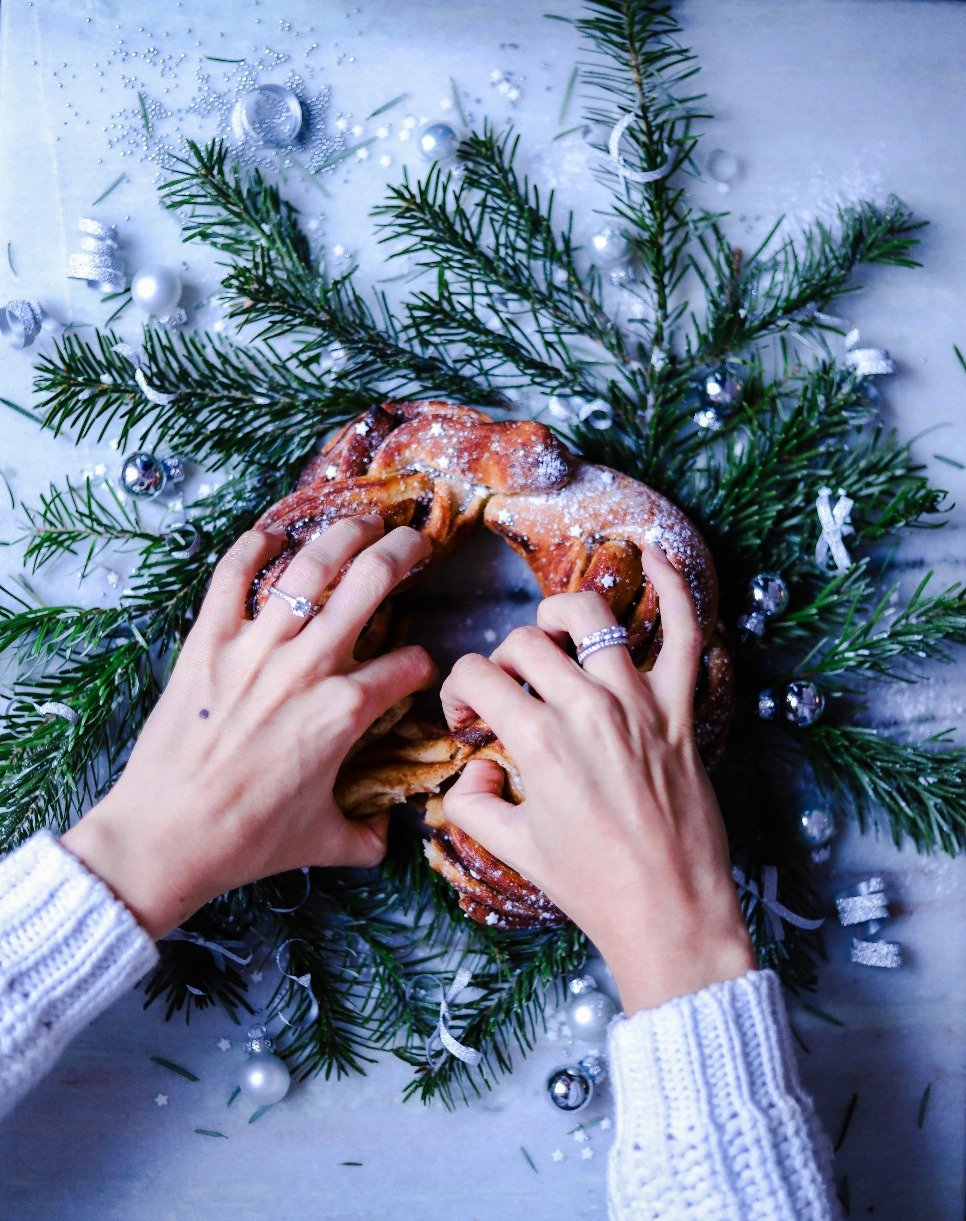 As for the decor, I’ve powdered my wreaths with some powdered sugar to give the look of freshly fallen snow (isn’t it pretty!) and added some silver balls and star sprinkles for a little extra magic. It’s not necessary to do so, but such an easy addition to takes this beautiful bun into a winter wonderland!

Now I must leave you on that note because I’ve got to go and pack my suitcase! We have a plane to catch from Paris to Toronto!  That’s right, we’re coming home for the holidays! But I just couldn’t leave without sharing this pretty recipe with you first. 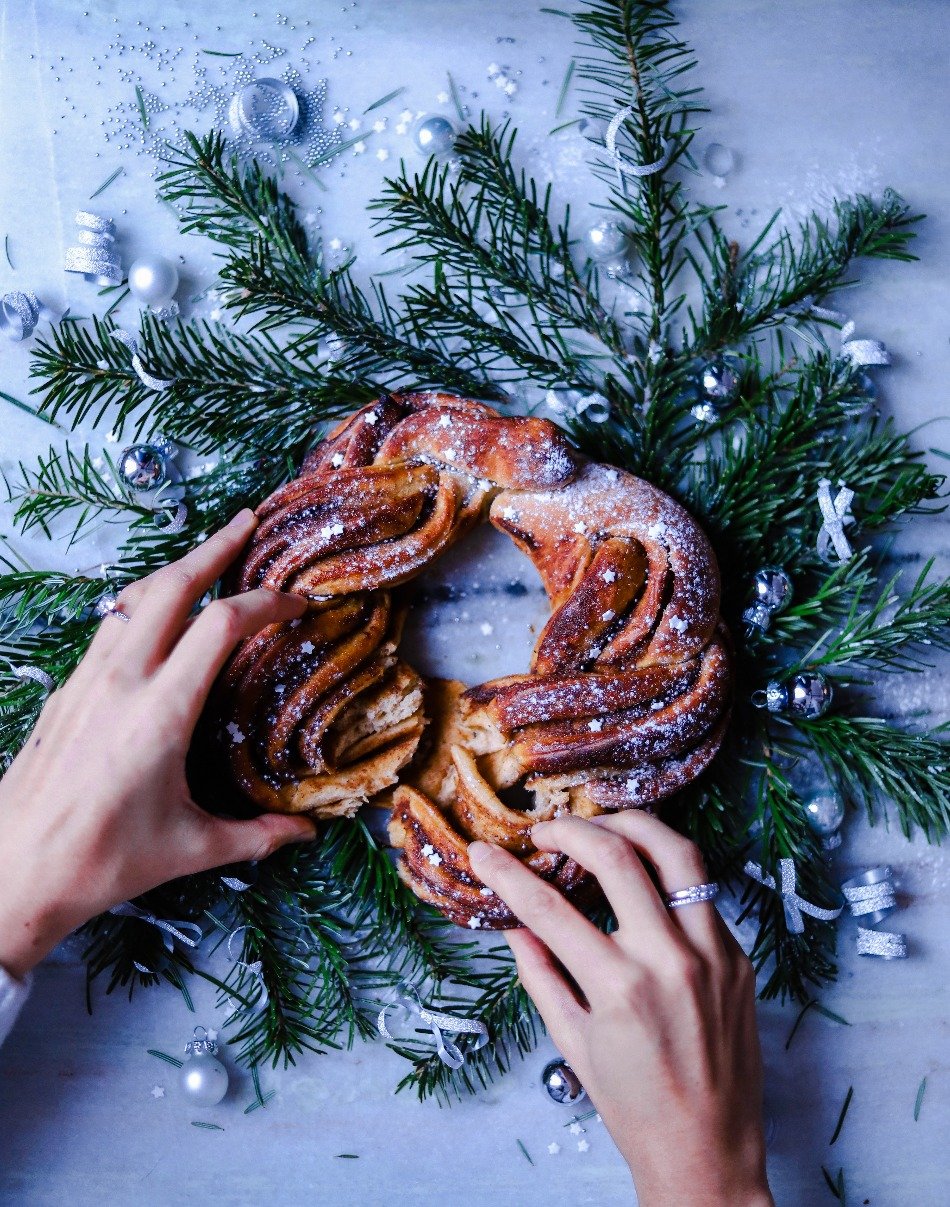 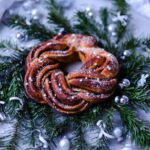 There is something magical about freshly baked cinnamon bread. It fills the air with Christmas cheer. This Christmas Cinnamon Bun Wreath looks, smells and tastes festive; and is a recipe is for all ages to enjoy.

Cinnamon bun wreaths can be frozen. Let cool completely, wrap well and freeze for up to two weeks. Let thaw completely before serving. Optional to pop in oven at 300C/150F for 15 minutes to warm.  Nutrition information is a rough estimate. 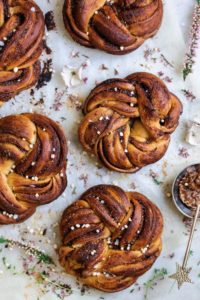 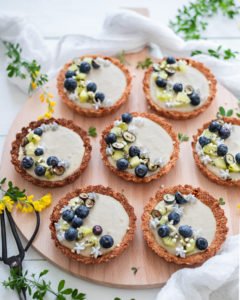 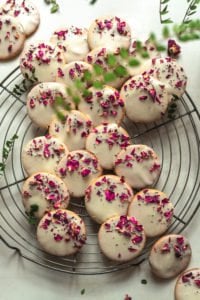