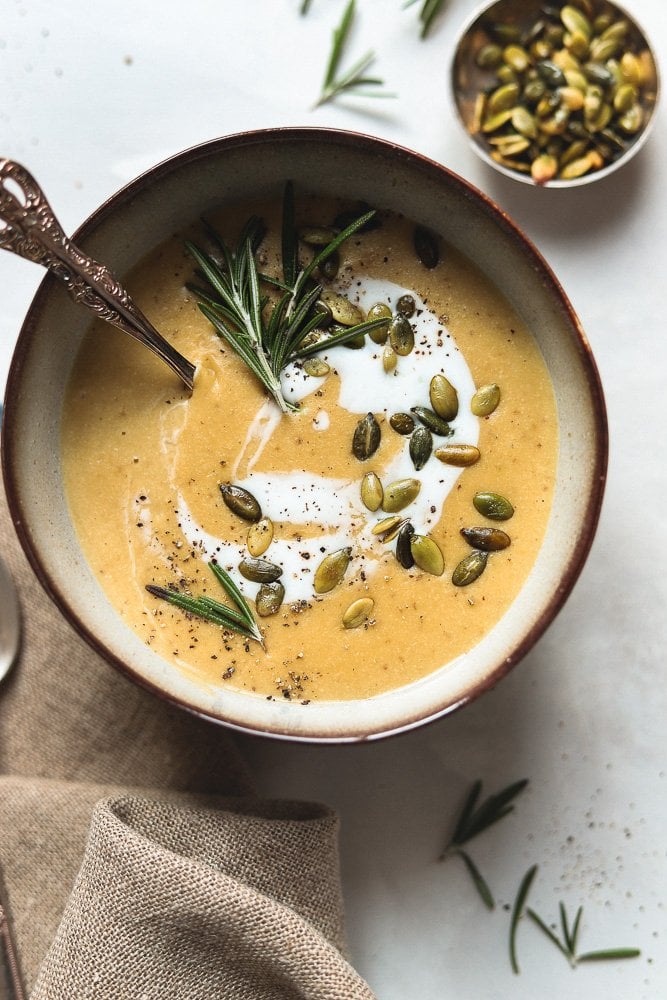 The recipe is quite simple, simmering leeks and potatoes in a pot until soft and tender, then blitzing in a blender and pouring in my cashew cheese sauce. The result is a smooth, creamy and cheesy leak and potato soup. If I could take a bath in this soup, trust me I would. It’s flavour rich and will have you coming back for a second and third bowl. 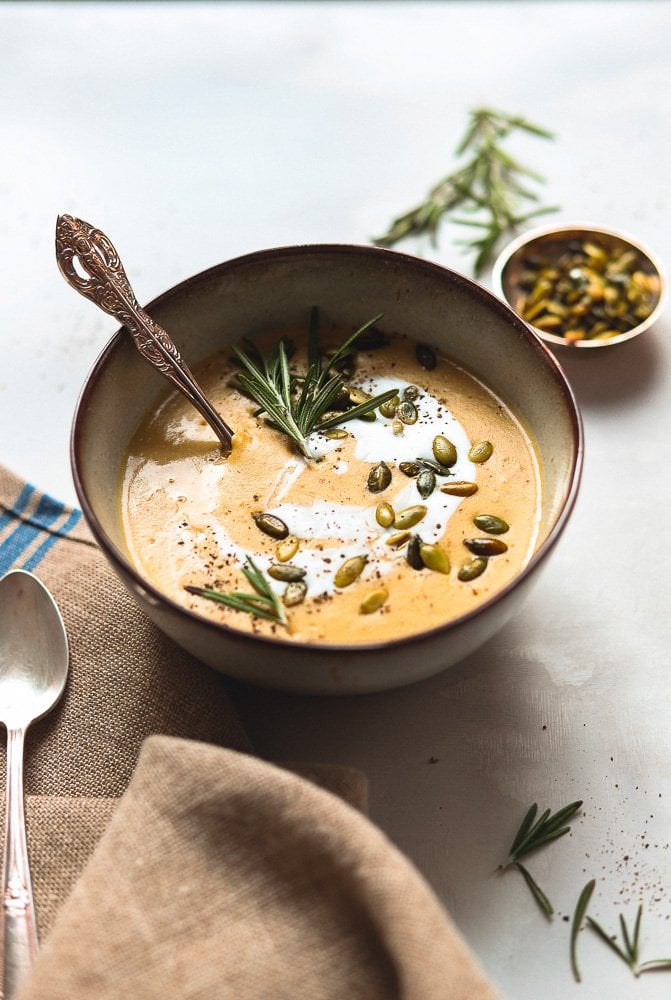 I love soups for lunch and dinner through the winter. It’s easy to throw together, and you end up with a warm and cozy recipe that makes you feel like a master chef. A few simple ingredients blended together can really turn into a miracle bowl, especially with a little coconut or cashew cheese to round out the flavours.

It’s the cheese sauce in this recipe that takes this vegan leek and potato soup to the next level. I’ve used the same cheese sauce mixture as the one featured in my Cheesy Vegan Hasselback Potato Gratin, pouring the liquid into the soup until perfectly cheesy and rich. You won’t believe how much depth and flavour it will add to your soup.

To make the cashew cheese sauce I’ve mixed garlic, almond milk, soaked cashews, nutritional yeast and salt. The outcome is a cheesy dream sauce. I love how the creamy and cheesiness pairs with potatoes to give them so much flavour, making them even more comforting. (If you’ve tried my Cheesy Vegan Hasselback Potato Gratin you will know exactly what I’m talking about). However, if you find the idea of making the vegan cheese sauce too difficult (maybe you don’t have nutritional yeast in your home, or a good blender) you can easily sub with some coconut cream. I highly recommend you giving the cashew cheese sauce a try though.

To top the soup I’ve pan roasted some pumpkin seeds and fresh rosemary with coconut oil and salt. The pumpkin seeds add a lovely crunch to the soup, like croutons but a more healthy option. It’s perfect for those of us who are gluten-free. Or for those looking to save bread consumption for stuffing yourself with stuffing at Christmas dinner! 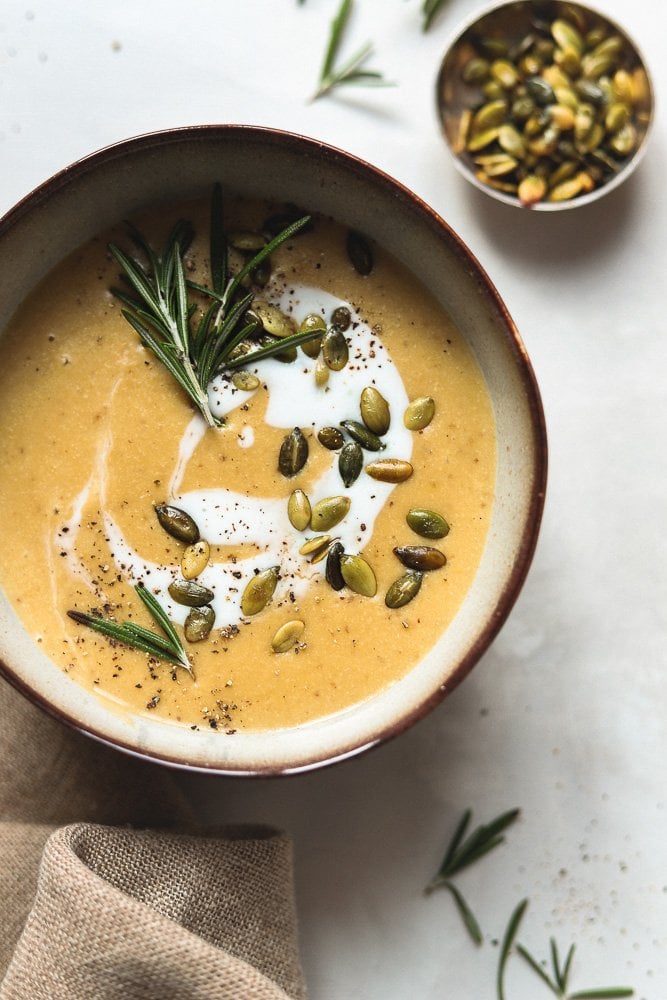 This recipe makes a great starter for a holiday gathering. Or, it’s an easy weekday recipe for dinner, and makes delicious leftovers for lunch. I like to make a big pot of this soup to last throughout the week, served with a side of salad or some baguette to dip. Whether you’re a vegan skeptic or a vegan veteran this recipe is a total crowd pleaser – I mean, cheesy potato soup? How can you go wrong?! It’s a recipe that pleases the masses. 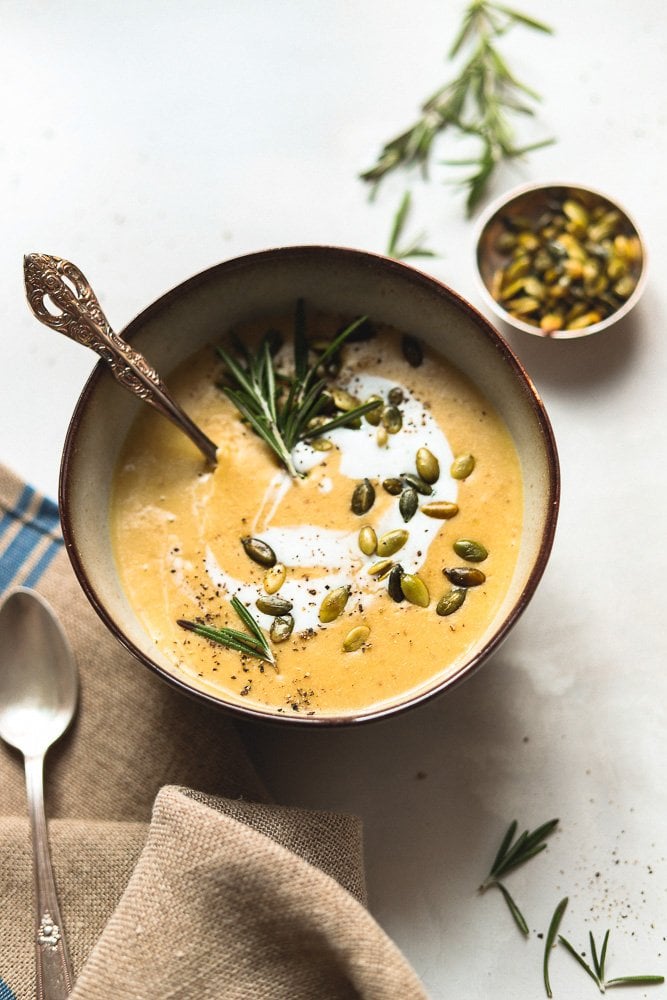 I do hope you’ll give this Cheesy Vegan Leek and Potato Soup a try, and if you do make this recipe please let me know in the comments below what you think! I love hearing from you. And of course, tag me on Instagram with the hashtag #twospoons. Nothing makes me happier than to see your recreations.

5 from 1 vote
By Hannah Sunderani
Creamy and cheesy Leek and Potato Soup. Completely vegan and gluten-free. This is a simple cozy recipe that's perfect for the cold winter months.
Print Recipe Pin Recipe 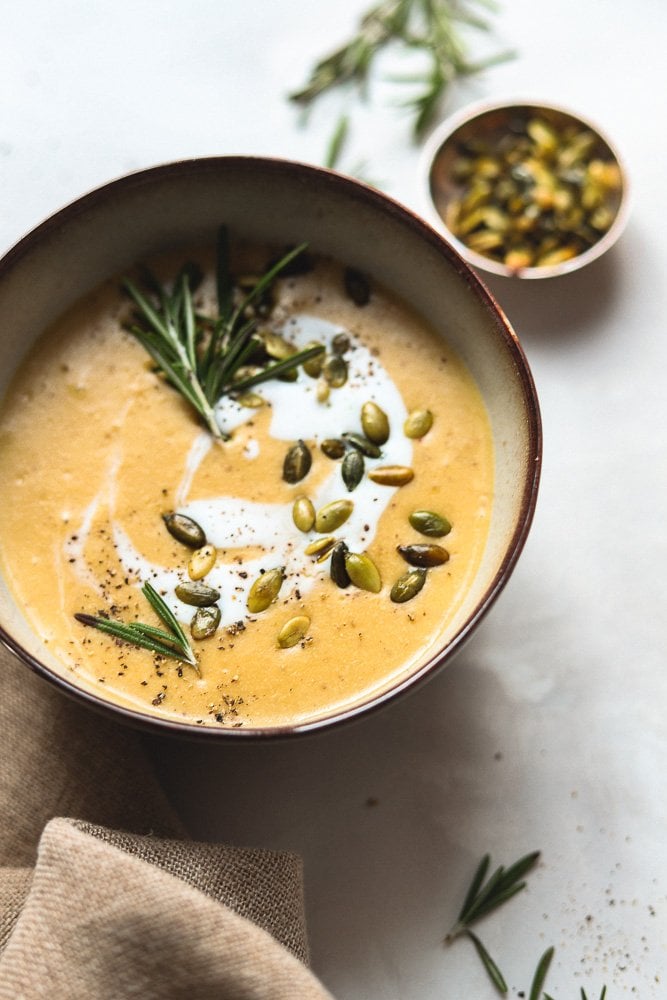 For the Leek and Potato Soup

For the Cheesy Cashew Cream Sauce**

*Be sure to wash leeks well as they hold a lot of dirt between the layers. I like to cut mine first, and then give the pieces a thorough wash. **Cashew Cheese Sauce can be replaced with 1/2 can (200ml) canned coconut milk. But the cheese sauce makes it extra cheesy! Also try this Cashew Cheese in my Creamy Vegan Hasselback Potato Gratin. Soup will keep in fridge for up to one week.