These beet brownies are fudgy, decadent, and chocolatey. You won't believe we've snuck beets into the batter! The texture is spot on, for a delicious tasting brownie recipe that you'll create time and again.
Prep Time: 15 mins
Cook Time: 30 mins
Total Time: 45 mins
Jump to Recipe

Hiya Friends! Today I’m sharing this delicious recipe for beet brownies! This recipe is so fudgy, decadent, and chocolatey. You won’t believe we’ve snuck beets into the batter! In fact, it’s one of my favourite brownie recipes I’ve ever made. The texture is spot on for a delicious tasting brownie recipe that you’ll create time and again.

This recipe proves that cooking with beets has never been sweeter. Beets and chocolate go together so well!

So, let me tell you exactly how to make these beet brownies, so that you can enjoy them pronto.

This beet brownie recipe is:

There really isn’t more we could want from a delicious brownie recipe, and you’d never know there was healthy beets in the batter! In fact, beets are a naturally sweet root vegetable, and so they work really well in baked goods, especially chocolate ones.

In fact, the colour of the beets also gives it a beautiful red hue that makes the brownies look like red velvet cake. Even those who think they don’t like beets will love this recipe.

I won’t lie, it took me 3 rounds of recipe testing to perfect these beet brownies, and I am so very proud of the outcome. The recipe has been adapted from Pinch and Swirl, made vegan of course, with substitutes like flax eggs and vegan butter.

I’ve served the recipe to my family, friends, and neighbours and it received smashing reviews! Even my 2 -year-old niece cried when she was finished because she wanted another brownie. (I should feel more guilty about this, and less proud of the recipe!).

Needless to say, I know you and your family are going to love these vegan beet brownies too. Which is why I’ve given it my Skeptic and Toddler stamp of approval.

How to make beet brownies:

Okay so we’ve talked about how delicious these beet brownies are. Now let’s talk about how to actually MAKE them!

Making beet brownies is so simple and easy. You don’t need to be a master baker to master this recipe. Anyone can do it.

The main tip for perfecting beet brownies is to ensure that the cooked beets are pureed before adding to the brownie batter. We don’t want to be eating big chunks of beets in our brownies, now do we? Save that role for the chocolate chips. I like to puree the beets in a food processor or high speed blender using the tamper tool.

Note – It’s also important that you’re using cooked beets for this recipe, not raw. You can buy pre-cooked beets from the grocery store, or cook them yourself on the stove top in a pot of boiling water until fork tender (about 1 hour), peel and chop.

In addition, we want to melt the chocolate chips and butter together, and let it cool slightly while we bring together the other ingredients. I like to quickly melt the butter and chocolate chips in the microwave, but you can also do this in a double boiler on the stove top.

Combine all the ingredients together with a hand mixer (flax egg, sugar and other dry ingredients, melted chocolate and pureed beets). Then, transfer to a 8×8-inch square baking dish.

Although not necessary, I love to sprinkle the tops with a handful more of the chocolate chips. It looks so pretty when baked, and who doesn’t like a few chocolate chunks!? 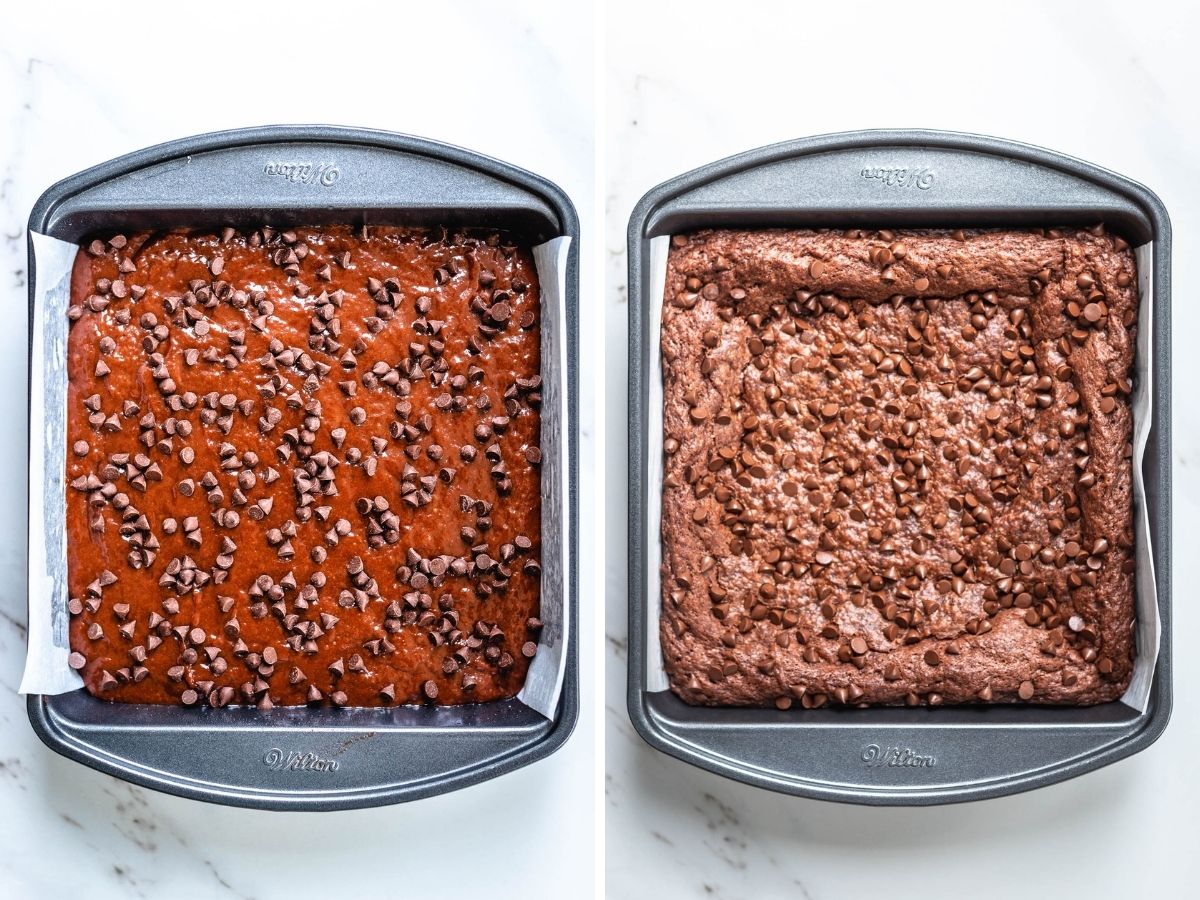 Can you freeze beet brownies:

These beet brownies can be frozen for up to 2 months. Store in an air-tight container with layers of parchment paper in-between the stacked layers. This will stop them from sticking together. Let thaw at least 30 minutes before eating.

I like to take the brownies out of the freezer the day before eating, and pop straight in the fridge to thaw overnight.

So there we have it. A delicious beet brownie recipe that’s moist, fudgy, chocolatey and vegan! They’ve got a gorgeous red velvet hue, and you’d never know it was from pureed beets! This recipe was a huge hit with both the vegans and the vegan skeptics in our family. I know you are going to love these beet brownies as much as we do.

If you do make this recipe please let me know in the comments below what you think! I truly love hearing from you, and I’m always here to answer any questions you might have. And of course, tag me on Instagram with your pictures using the hashtag #twospoons. Nothing makes me happier than to see your recreations.

Save this recipe for later. Pin it on Pinterest!