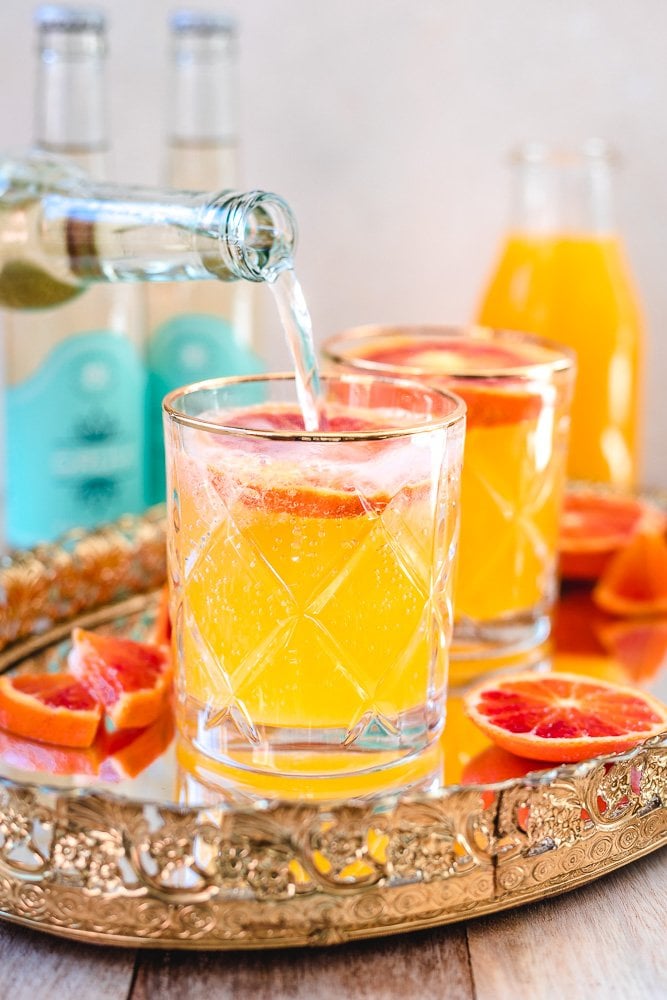 When it comes to alcohol-free drinks, we all know they can be pretty uninspired. And don’t get me wrong – I’m not against drinking. I love a glass or two every now and then.

But I’m definitely what they’d call a light drinker – and my hangovers will be the first to agree that I feel better staying away from the stuff!

I also won’t lie in saying that my desire not to drink at social gatherings often makes me feel like the buzz-kill at the party.

Fortunately, over the years non-alcoholic drinks have started to become more popular. Restaurants are offering kombucha on tap, and mocktails on menus are getting more creative.

It seems like non-acoholic beers and wines are taking a turn at the spotlight. Certainly, craft breweries had their moment for long enough.

So, today I’m reviewing one of these non-alcoholic beverage brands, Grüvi – a maker of non-alocholic beer and Prosecco, who graciously sent a variety of their drinks to try for this review.

So, what’s the verdict? Are their non-alcoholic drinks as good as they claim to be?  I’ve outlined both the pros and cons for Grüvi beverages below. 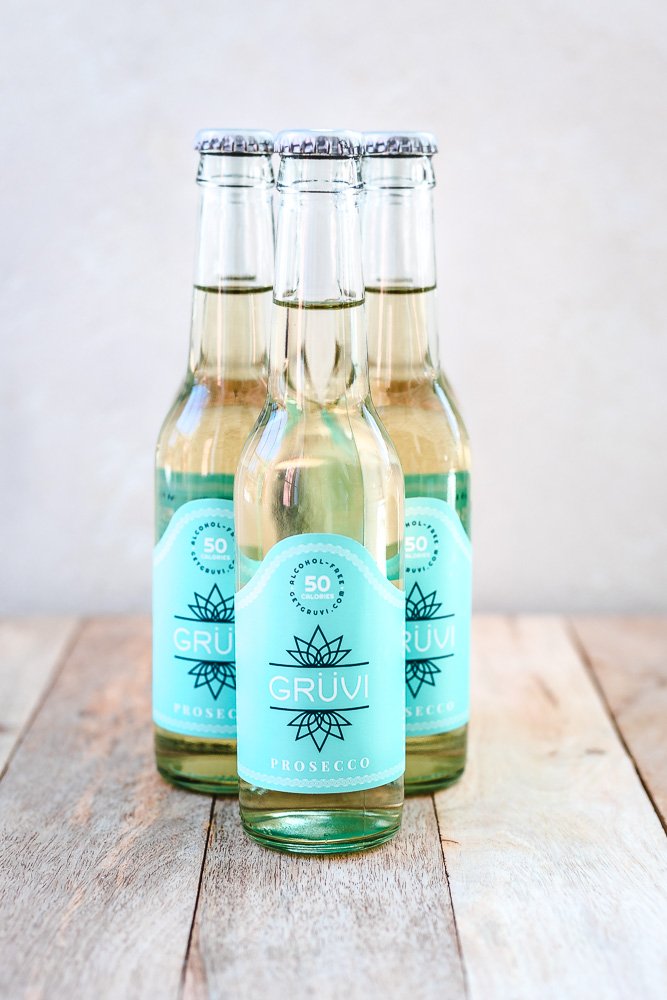 When looking for an alcohol-free beer and wine; taste is of the utmost importance. Does it actually taste like beer and wine? The answer is yes!

Certainly, Grüvi’s beers and Prosecco checks all the boxes. Their Prosecco is dry, light, and bubbly, with a slightly tart taste at the end.

I couldn’t believe just how much it tasted like real Prosecco! My husband and I loved it. And we loved making mimosa cocktails with their Prosecco.

Same goes for their beers. The wheat-beer was light and refreshing, the IPA hoppy in flavour, and the stout bold and flavour-rich.

Not only that, but they also poured like beers, and the colours and consistency were spot on.

All-in-all, these non-alcoholic drinks could pass undetected at a social gathering. Nobody would notice they were alcohol free! (Might be a fun challenge to try?).

In my opinion, there is no compromise swapping an alcoholic beverage for a Grüvi one.

Now, it’s not only the taste that I loved about Grüvi’s drinks. It’s what’s in the drinks that really impressed me. Their ingredient list is simple and easy to understand.

For example, their Prosecco is made with carbonated spring water, white wine grapes, natural flavours, and citric acid. I can literally count them all on one hand.

A bottle boasts only 50 calories, and it’s gluten and sulfate-free. Now that’s a celebratory drink I can get behind.

And the Gruvi beers are much the same. Take their IPA for example; it’s made of water, barley, wheat, maltodextrin, hops, and yeast.

As you can see their beverages have simple ingredients. Frankly, they consist of exactly what you’d expect to be in a beer or Prosecco (grapes, hops, barley, no nonsense).

I must say, Grüvi’s branding is on point. It’s bright, chic and minimalist in design. Pretty much the cool bev I’ve been waiting to bring to parties without feeling like a Debbie Downer.

The branding reminds me of those you’d find in a craft beer. It reeks of coolness.

Gone are the days of trying to cover lame labels with your hand as you sip. Time to show off your can as your friends take turn asking to try.

Although there aren’t many cons to Grüvi’s product, one is that it’s tricky to find this brand in stores.

However, if you shop online then you’re in luck!  For U.S. citizens, you can order their products straight from the Grüvi website and they’ll deliver to your door. As for Canadians, they are now selling online through Well.ca.

As we become more environmentally conscious, individual and single-use packaging can have its set-backs to aiding in a greener planet.

Using something once, and throwing it away doesn’t really pay tribute to that second R (re-use) we’ve been told to do since primary school.

I’d love to see this product offered in a format that addresses this. Perhaps by making their Prosecco available in a standard 750 ml bottle for group use, as well as 1L bottles for their beers (a popular format in Europe).

In addition, maybe they could offer a buy-back system for the bottles for re-use. Fortunately, all their bottles/cans can be recycled traditionally.

To buy or not to buy?

If you’re looking for an alcohol-free beverage that’s healthy, trendy looking, and tastes a heck of a lot like the real stuff – then you’ve found your match. My husband and I loved these drinks, and certainly are forever fans.

It’s so nice to see hip brands coming into the market that makes it easier and more comfortable not to drink in social settings, while still feeling like you’re part of the party.

No doubt there was a desperate need for innovation in this space, and Grüvi proves that non-alcoholic beers and wines actually can taste great. So, it’s a win for me!

And if you are interested in trying out these non-alcoholic beverages than I’ve got a discount code for you! Use code twospoons for 15% off all Grüvi drinks through their website! (For U.S. Citizens. This discount never expires).

Enjoy a refreshing drink for a little less on me.

I hope you found this Grüvi review helpful. And if you do try them out let me know what you think in the comments below, I love hearing from you!

And if you want a fun mocktail recipe, try using their Prosecco to make a mimosa. I think you’ll love it for Sunday brunch as much as we do. 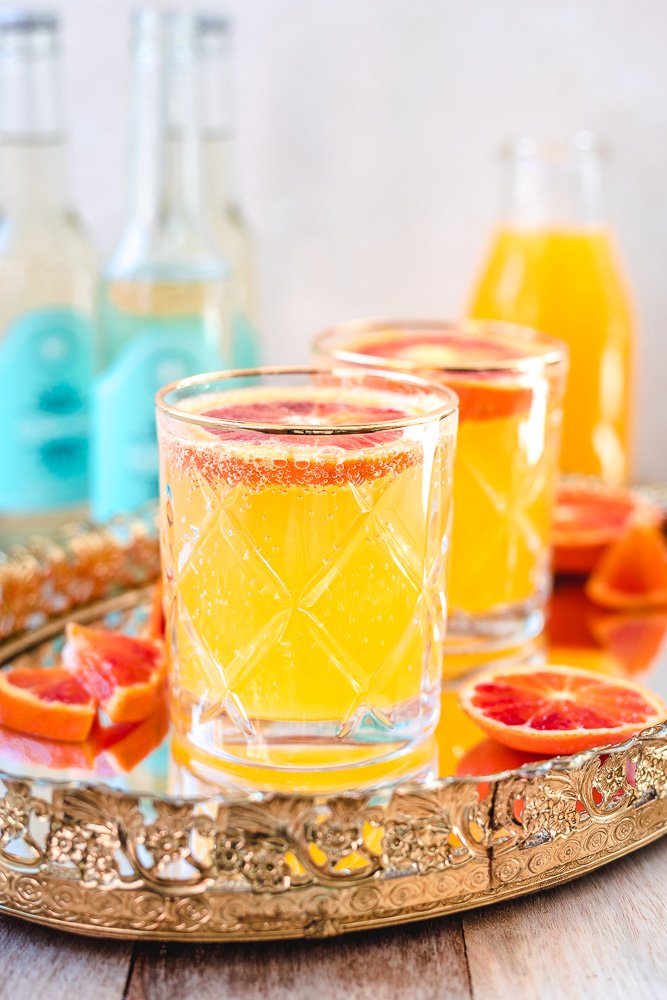