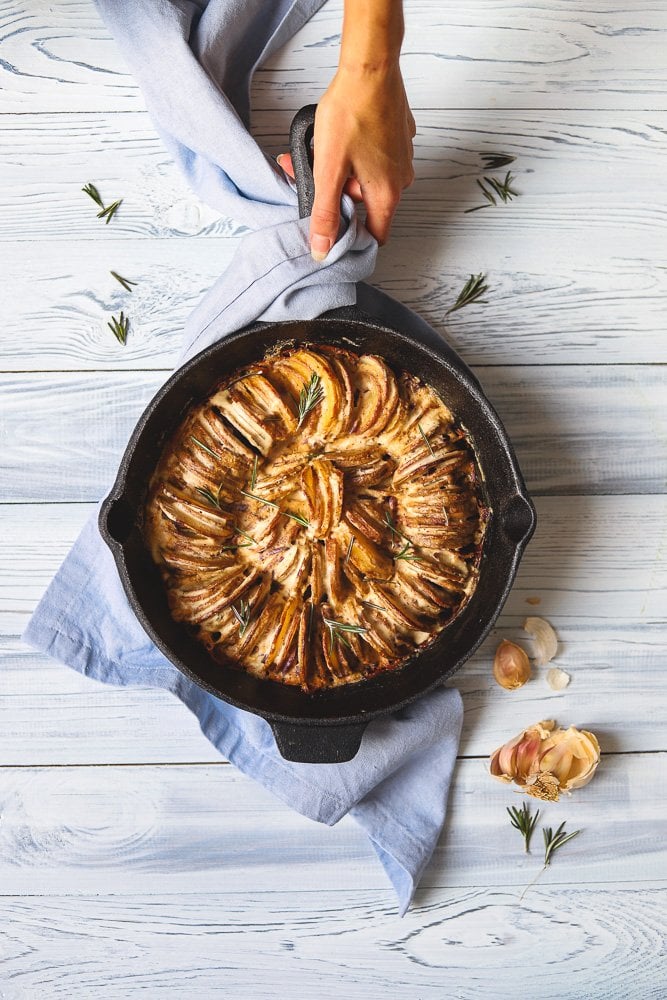 Hi everyone! Today I’m sharing with you one of the most comforting savoury winter dishes I’ve made for the blog. A recipe for my Cheesy Vegan Hasselback Potato Gratin. It is creamy, dreamy, warm and indulgent.

If you’re a potato fan (and who isn’t) you’re going to freak over this recipe! It’s an ensemble of thinly sliced potatoes swimming in creamy cashew cheese sauce, with hints of garlic and rosemary. Say what? Heaven in a cast iron skillet, that’s what. 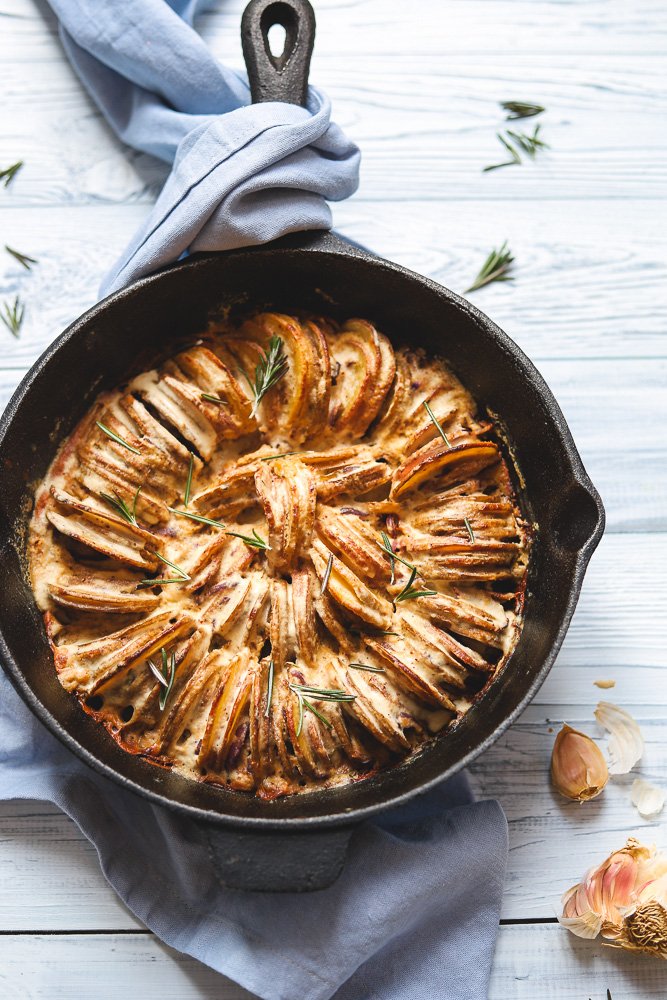 I wouldn’t say, however, that this a simple recipe to make. But instead, this recipe is dressed to impress. That’s why I’ve stamped it Chef Approved. So if you’re having a special gathering, or have been put in charge of potatoes at your family Christmas, you’re going to want to make this crowd-pleasing recipe. This Vegan Hasselback Potato Gratin is incredibly creamy. It’s full of cheesy flavours from cashew and nutritional yeast making each bite a savoury indulgence. Overall, it’s warm and hearty dish to please everyone from the vegan veteran to the vegan skeptic.

To make the recipe, it begins by thinly slicing your potatoes and arranging them in a cast iron skillet. I’d highly recommend using a mandolin to do this. The potatoes will slice super thin when using a mandolin, which is much harder to achieve with a knife. You will save lots of time and energy.

When packing the potatoe slices into hasselback form you want to make sure they are tight, but not packed too tightly otherwise it will take ages to cook, and it will be hard to get the cheese sauce to fall between the gaps. 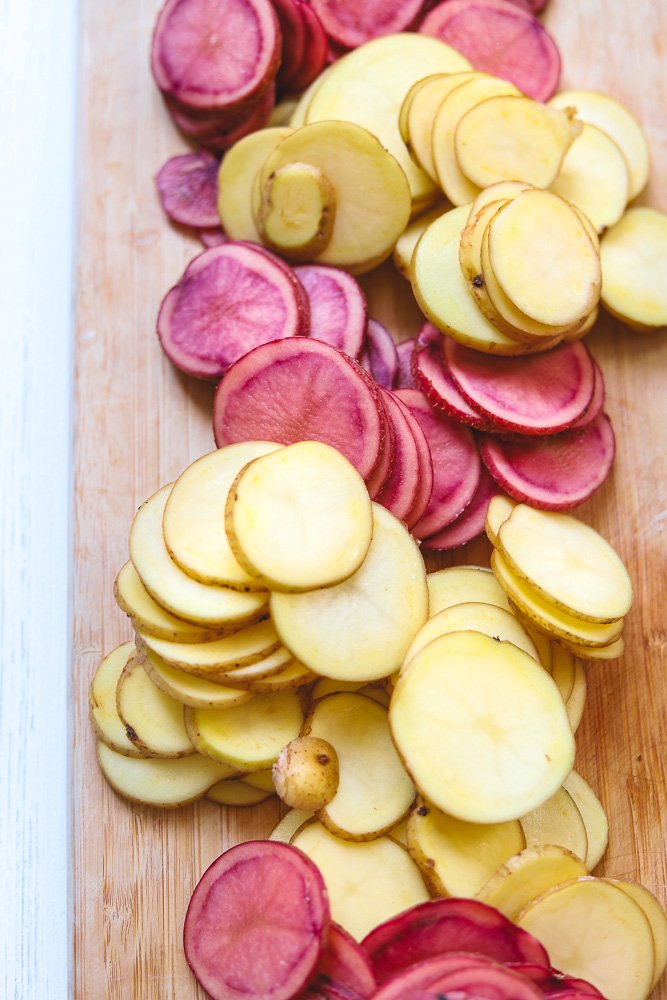 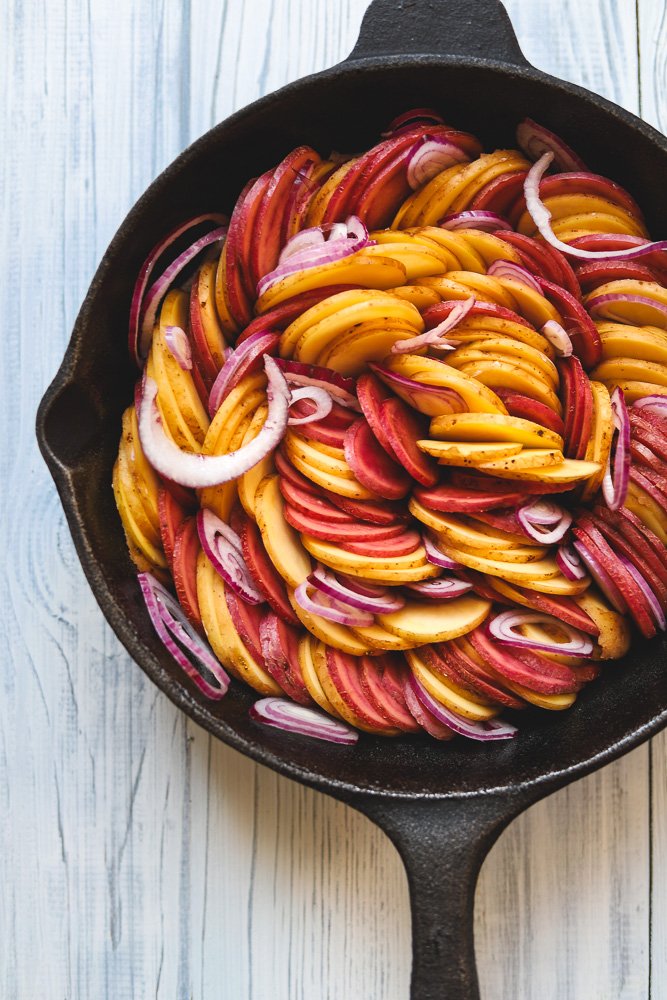 The cheese sauce in this recipe is really what makes this potato gratin so creamy and comforting. It’s a blend of soaked cashews, almond milk, garlic, salt, nutritional yeast, mustard and apple cider vinegar. Together it makes the creamiest and cheesiest sauce to add to your potatoes. You might notice that when making the sauce it will taste a bit on the saltier side. That’s perfectly okay. Since we are not seasoning the potatoes we want the sauce to be a tad more salty than usual. It will seep into those potatoes and give them a nice flavour while cooking. 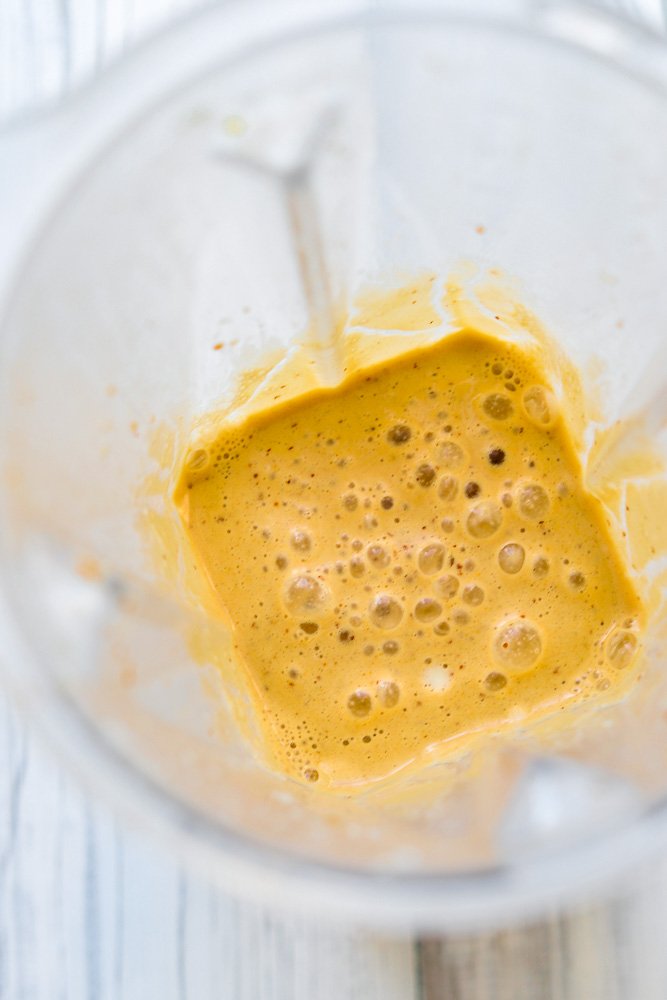 Another thing to take note of when making the sauce is that you want it to be thin enough to fall through the potato layers. The first time I experimented with this recipe my sauce was much to thick, and instead of falling into the nooks and crannies of the hasselback potatoes it sat as a big blob on top. While still tasting delicious it wasn’t the prettiest to look at. The beautiful layers of potato hasselback was hidden under the sauce, so it didn’t present that same wow factor. This is another reason why we also want to make sure not to overpack the potatoes when arranging.

I’ve since adjusted the ratios of the cheese sauce for a perfect consistency (in the recipe below), but if you notice your sauce a tad too thick after blending feel free to add splashes more almond milk to thin. You want it to be like a thick gravy – not so thin that it’s watery, but not too thick to stop it from falling between the cracks of the potato hasselbacks. 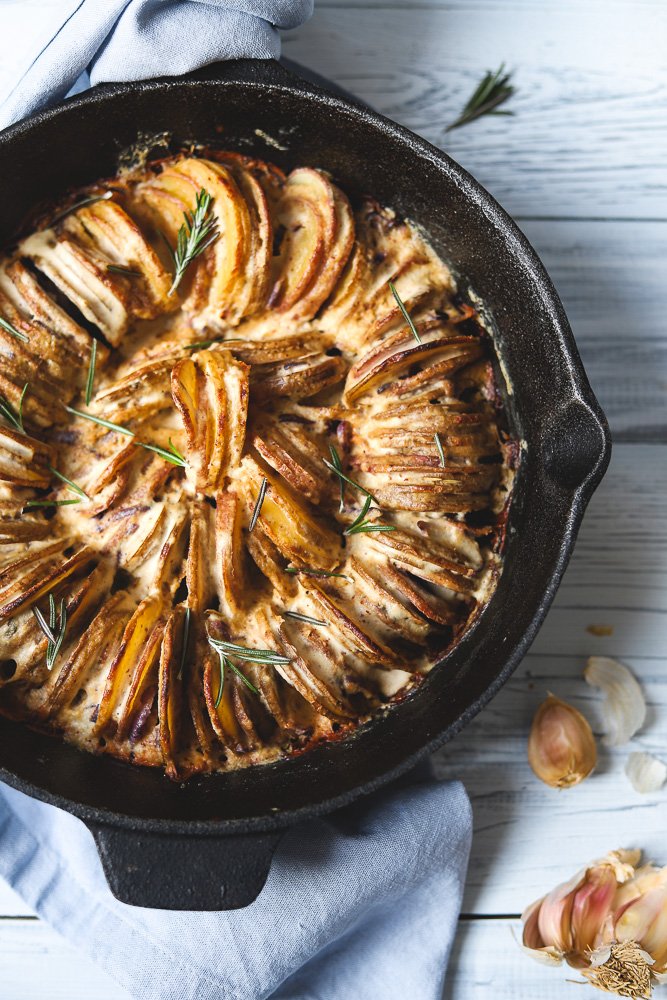 Also be aware that you might not need all of the sauce when pouring over the hasselback. So pour in batches. The goal is to be able to see those hasselback layers. Think of them like an island, you wan’t the potatoes peeking out of the “water,” not for it to over flood. I used about 3/4 of the sauce mixture, and then served the remaining sauce on the side. (Or, reserve the sauce for my Leek and Potato Soup!) 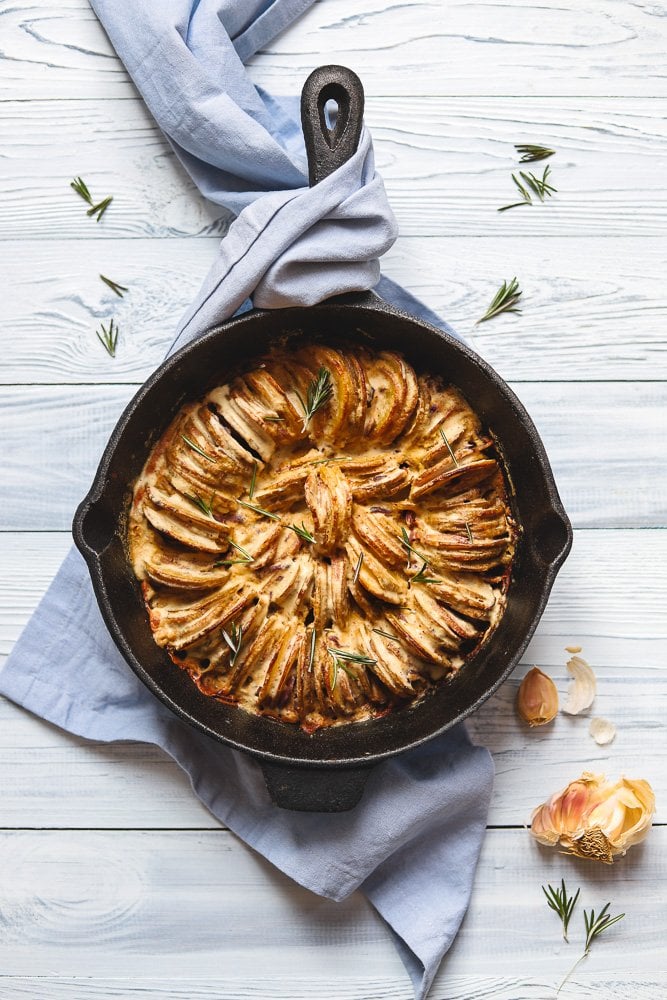 The final tip I have for making this cheesy vegan hasselback potato gratin is to use a cast iron skillet for baking. If you don’t have one add it to your Christmas list now! And then request that Santa give it to you early because it will change your cooking game. A cast iron skillet is able to get very hot, more than stainless steal, so your potatoes will really get hot and cooked well throughout. If you don’t have a cast iron, I suggest using a baking dish for this recipe.

The end result is a warm and hearty, creamy, cheesy, and garlicky potato dish that your guests will be swooning over. This is certain to be the side-dish everyone will be talking about this Christmas. Enjoy the flood of compliments to come your way with this warm winter dish. And, if you do make this recipe please let me know in the comments below what you think! I love hearing from you. And of course, tag me on Instagram with the hashtag #twospoons. Nothing makes me happier than to see your recreations. 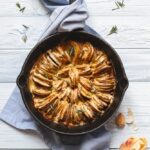 *Reserve any remaining cashew cheese sauce to serve on the side. Or, use in my Cheesy Leek and Potato Soup. **If you forget to soak cashews overnight you can speed up the process by soaking cashews in boiling water for 1 hour, ***If you don't have a cast iron skillet I suggest using a baking pan. 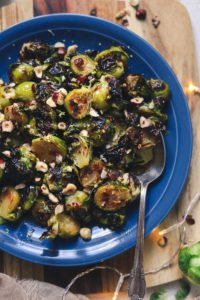 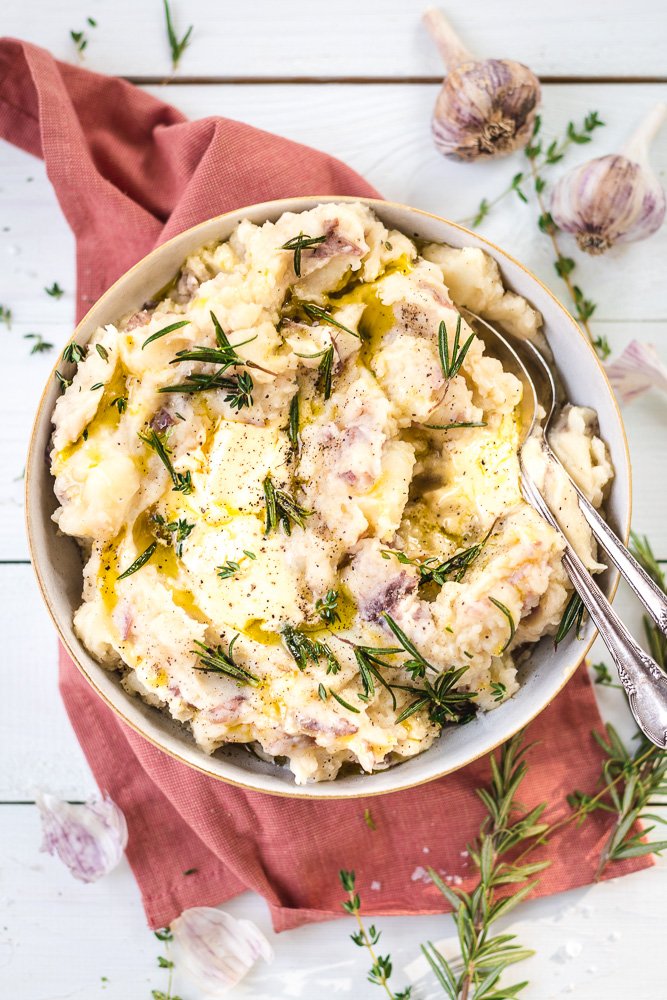 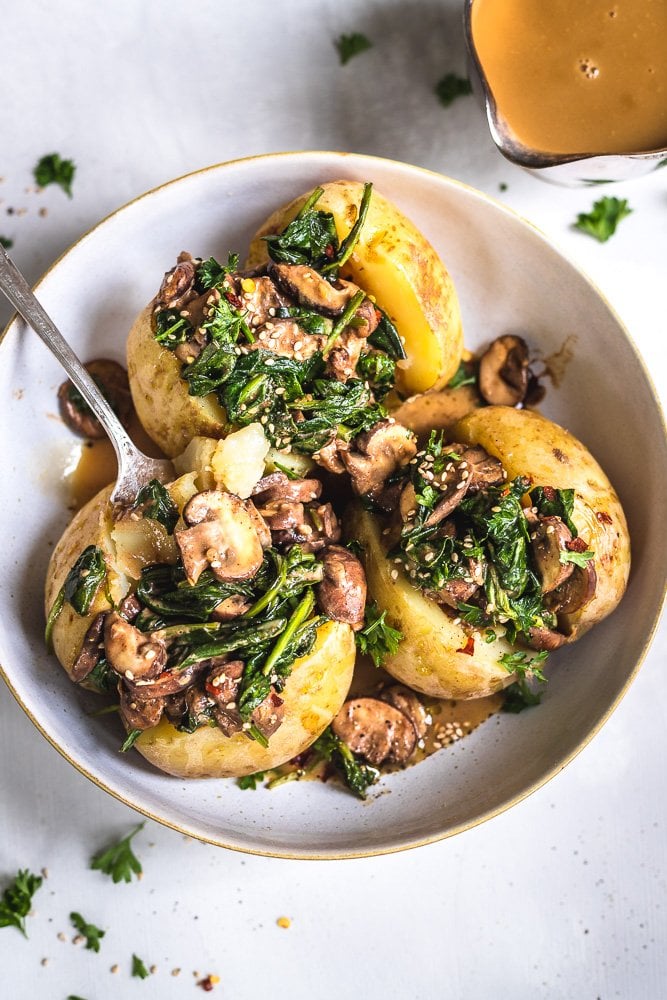