Here's a fun dinner/appetizer for you - sushi donuts! Made with sushi rice and thinly sliced colourful veg. It's a great one to make with kids, or to impress a group of friends.
Prep Time: 30 mins
Cook Time: 20 mins
Total Time: 50 mins
Jump to Recipe 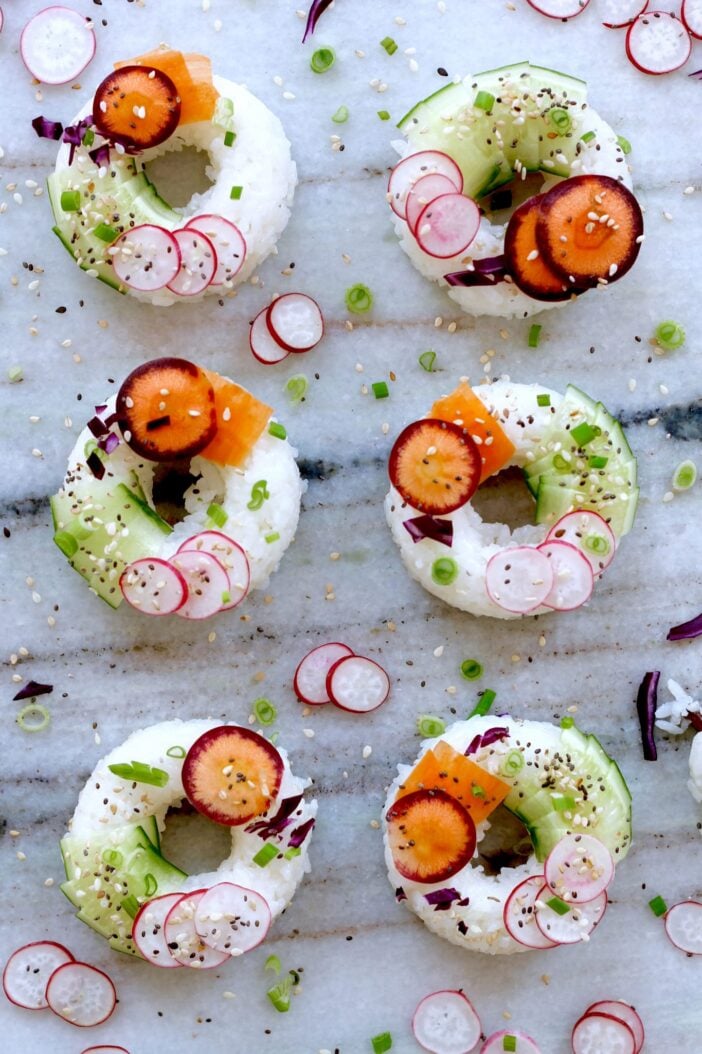 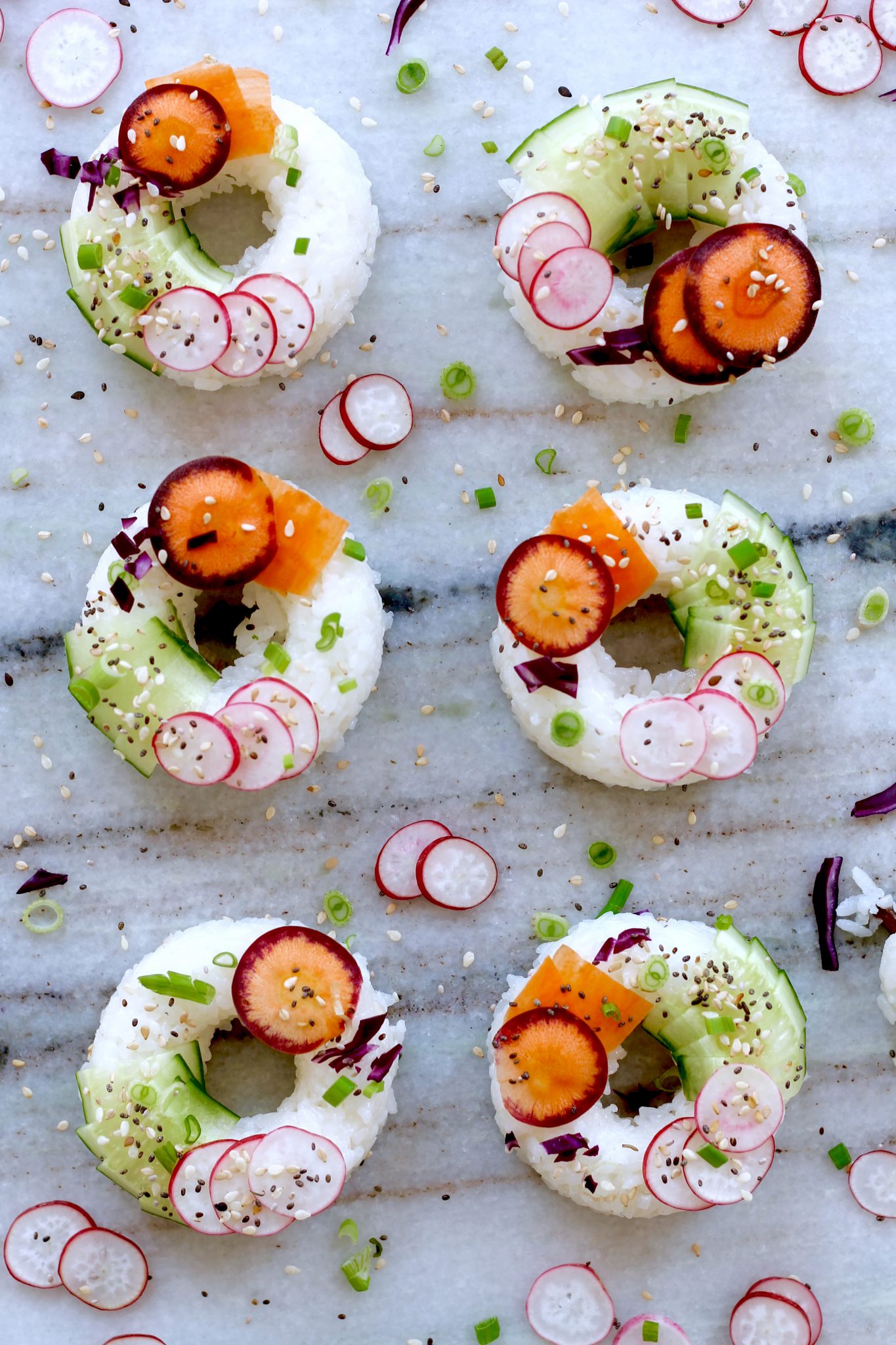 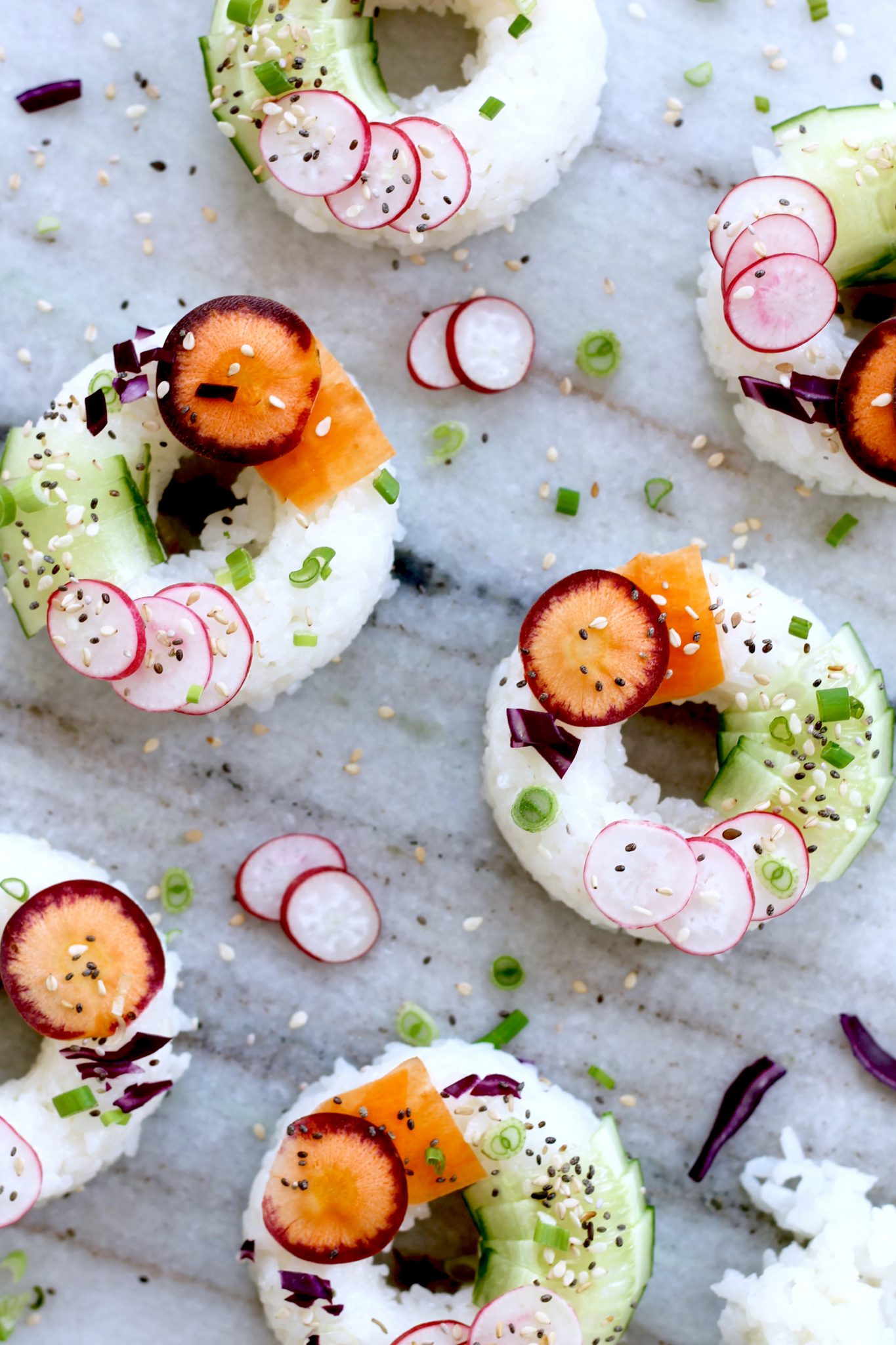 Donuts for dinner? Don’t mind if I do! Sweet meets savoury with these delicious sushi donuts, and it’s totally working for me! I mean, who doesn’t want a plate of donuts for dinner?

As you can see I’ve been having WAY too much fun in the kitchen playing with rice – first turning them into Fluffy Rice Clouds, and now into these savoury sushi donuts. I can’t stop playing with my food! But who knew there were so many ways to spruce up the plain and simple rice? What would you like to see next? A Stormtrooper? The White House? You got it!

Actually, the inspiration for these sushi donuts came from SAM at So Beautifully Real. Her donut creations literally make my jaw drop at the touch of the button hitting Instagram. This girl takes the cake, literally, for the most drool-worthy sweets that has me babbling like a baby. I saw that she had been experimenting with some savoury style sushi donuts, transitioning them from the staple dessert to dinner, and decorating the donuts with savoury toppings like sliced avocado and sesame.

So here’s is my rendition of the sushi donut; dressed in colourful toppings like pink radish, orange and purple carrot, cabbage, cucumber, green onion and sesame. Served with avocado on the side of course – and intentional decision as my avo to rice ratios are out of control. Dunk these in some soy sauce and it’s the perfect combo; like donuts and coffee, one would say. There is something to say about decorating your dinner – because I swear, everything tastes better when it’s in the shape of a donut!

Donut believe me? Try it for yourself! 😉 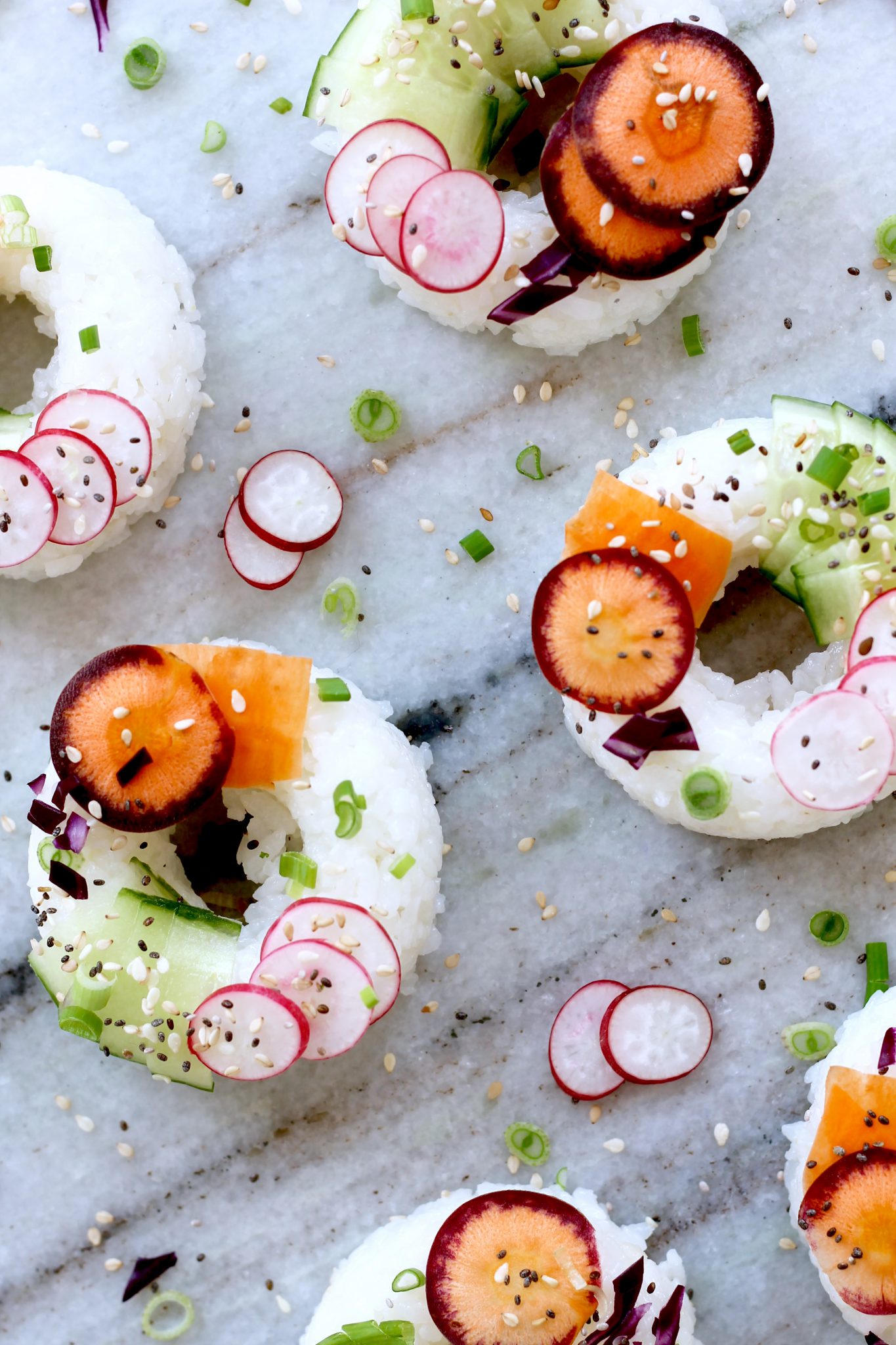 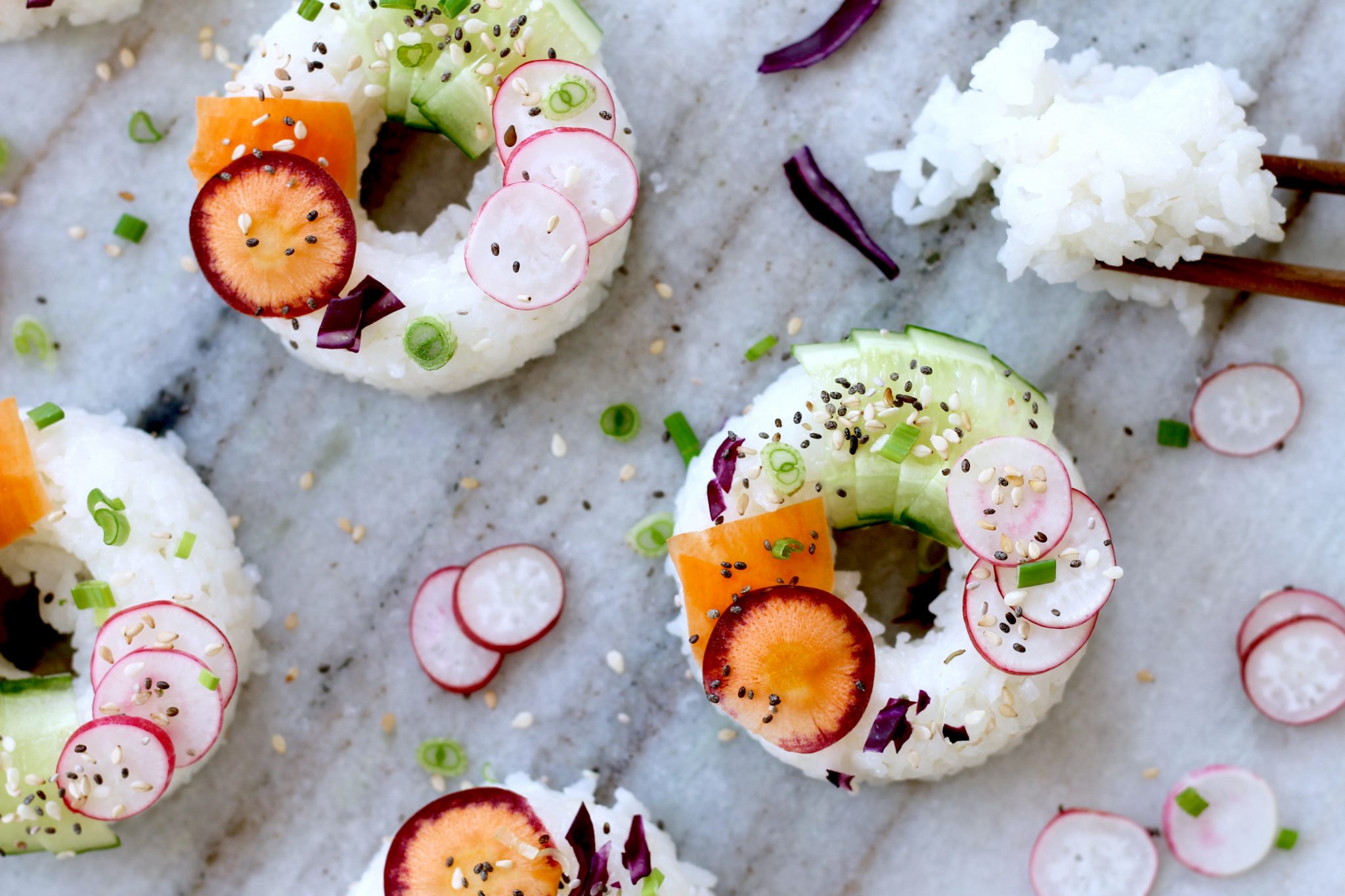 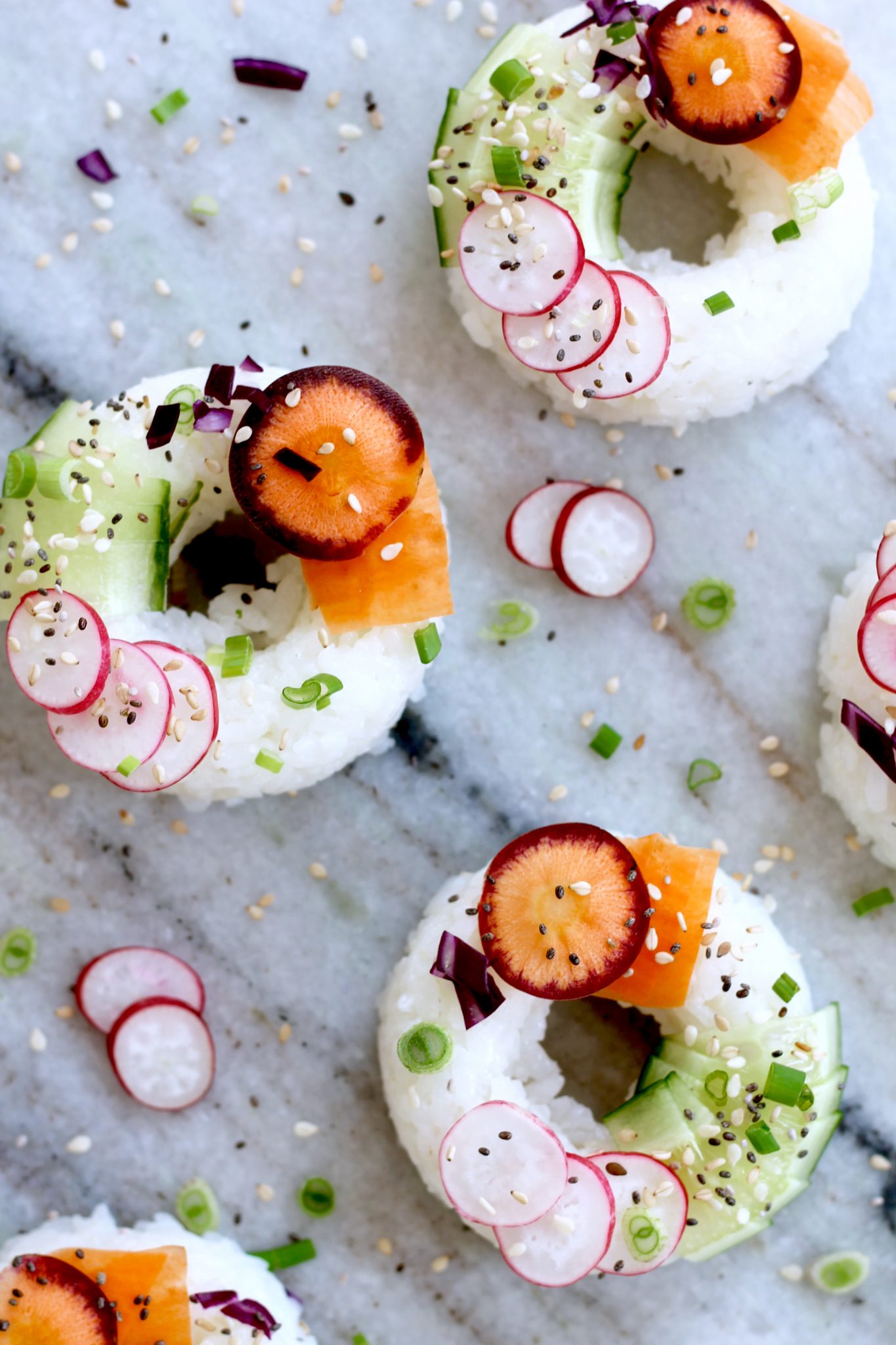 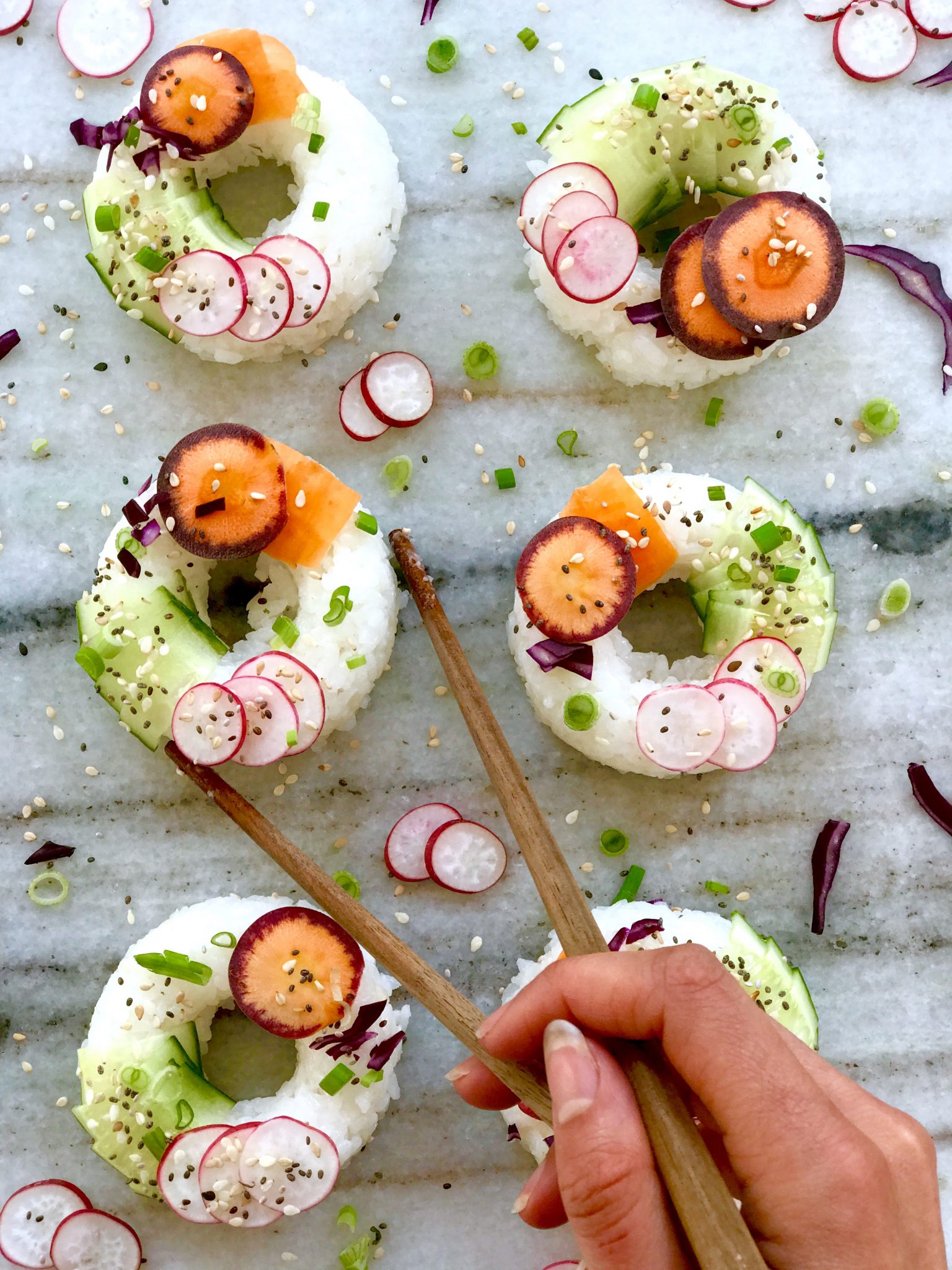 No ratings yet
By Hannah Sunderani
Here's a fun dinner/appetizer for you - sushi donuts! Made with sushi rice and thinly sliced colourful veg. It's a great one to make with kids, or to impress a group of friends.
Print Recipe Pin Recipe

Nutritional information is a rough estimate.