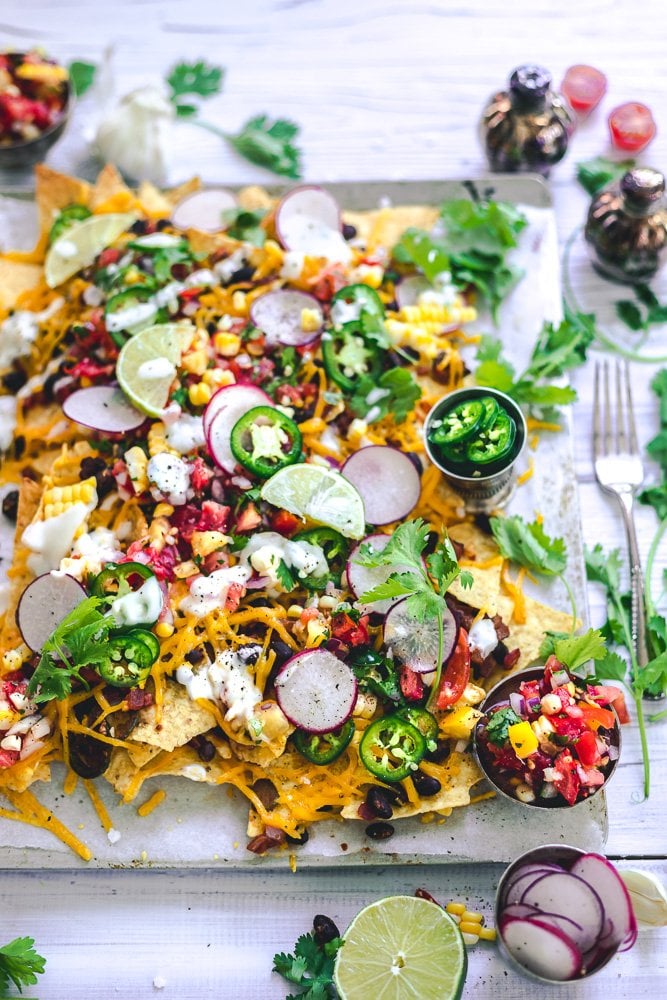 Hello I’m back! After taking the summer off to move back to Canada from France, this is my first blog post made on Canadian soil. I’m officially living back in my home country, and I’ve got many exciting Two Spoons projects heading your way. But first, let’s not get ahead of ourselves. This blog post is dedicated to vegan comfort food at its finest: Fully Loaded Black Bean Nachos. And I must say, these nachos are truly as comforting as they look!

Given it’s the last long weekend of the summer, these Fully Loaded Black Bean Nachos are the perfect recipe to share amongst friends and family.  Whether you’re attending a bbq or spending it by the water, these fully loaded nachos are a delicious way to say, “sayonara summer!”

This recipe combines a zesty black bean mix with vegan cheddar cheese and homemade salsa. And the combo is cosmic. It’s 100% VEGAN, GLUTEN-FREE, HEALTHY-ish, and easy to assemble. I’ve no doubt you’re going to love this recipe as much as I do.

It’s easy! These fully loaded black bean nachos begin by preparing the toppings. And I’m going to start with my homemade salsa. I absolutely love this mixture for a light and bright salsa. I find homemade salsa SO much tastier to store bought. It’s bright and refreshing, and full of flavour. Plus, tomatoes are SO good right now, so why not take full advantage? Preparing the salsa first will help the flavours to meld together while you prep your other ingredients.

Finally we will whip together a batch of vegan sour cream (optional, but a must for me). It’s an easy 3-ingredient vegan sour cream that adds beautiful creaminess and helps to cut the spice! More on that to come.

It’s worth noting that we will add the salsa and sour cream after baking the nachos. Otherwise you will soak your tortilla chips into a gloopy wet mess.

This homemade salsa is light, bright, and healthy. Made using ripe tomatoes of choice, red onion, garlic, corn, lime, cilantro and jalapeno (optional), and lots of sea salt – it’s a beautiful melange for one hell of a dip!

It’s important to note that the salsa is added at the END of the recipe. After baking the nachos and just before serving. Otherwise you’ll end up with a wet batch of nachos. You can also serve the salsa on the side as a dip. But I prefer them directly on the nachos for serving. It’s prettier and fuss-free. 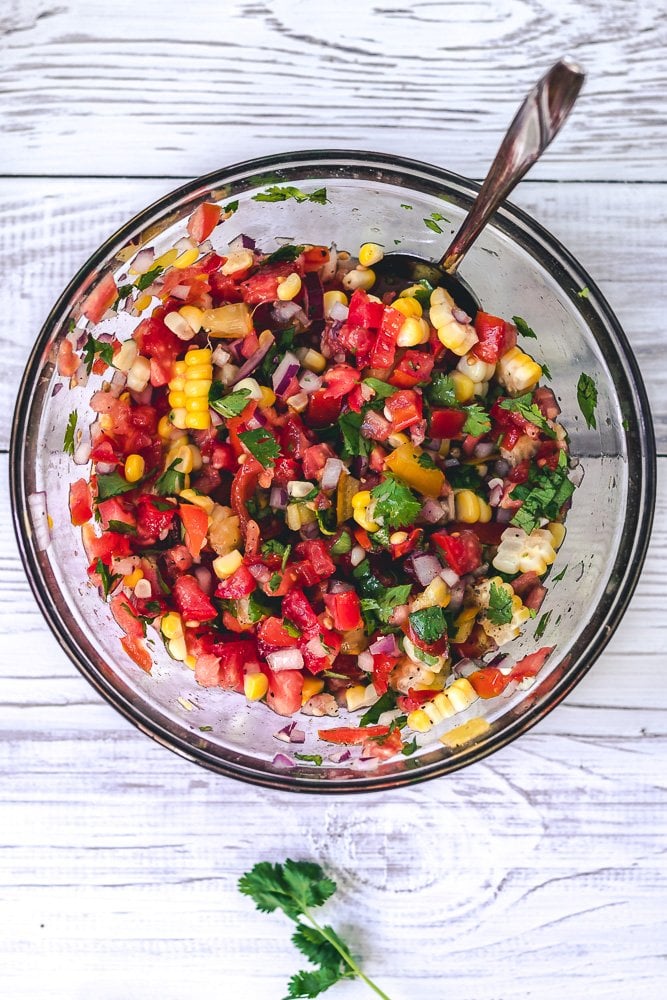 To cook the zesty black bean medley we start on the aromatics. This is the red onion, garlic, jalapeno pepper, paprika and cayenne. Toss in a skillet with coconut oil, and sauté until onions are softened and translucent. Add in your black beans and a squeeze of lime and stir for a few minutes to warm. 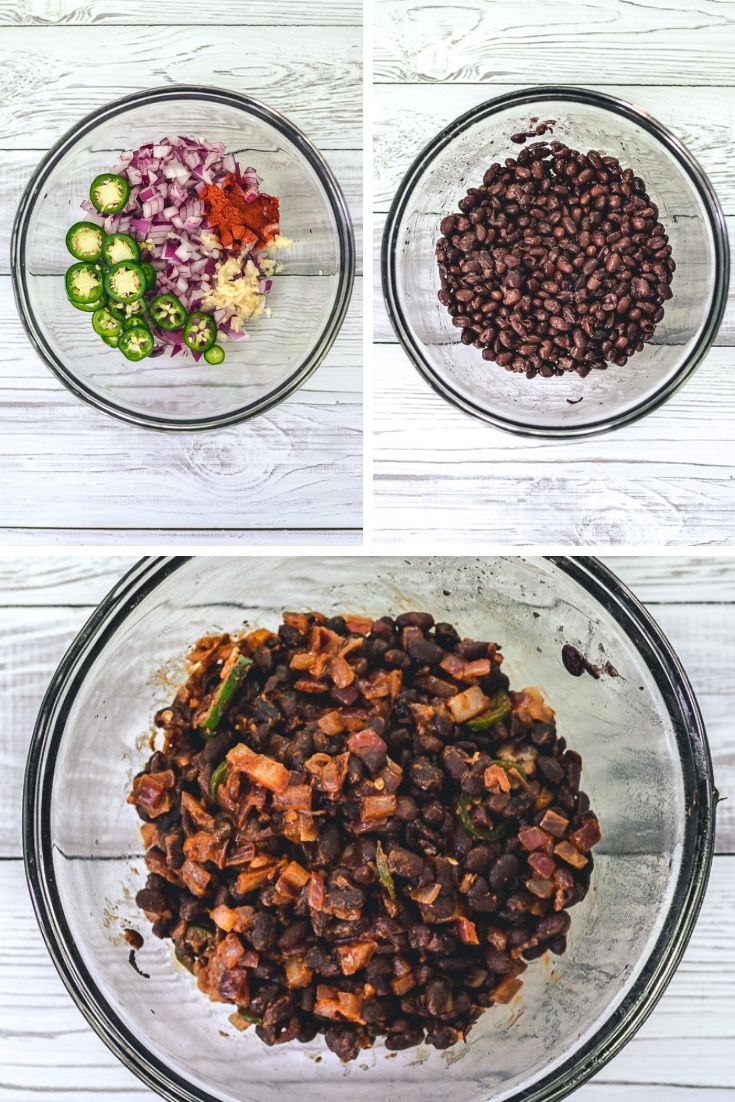 Forgo buying expensive store-brought vegan sour cream and make it yourself.  It’s a cinch! All you need is coconut yogurt (or other plain plant-based yogurt), a squeeze of lime juice and pinch of salt. Stir together and viola! It’s easy to prepare, and so much healthier to the traditional. Topping your nachos with vegan sour cream is optional, but for me it’s a must. 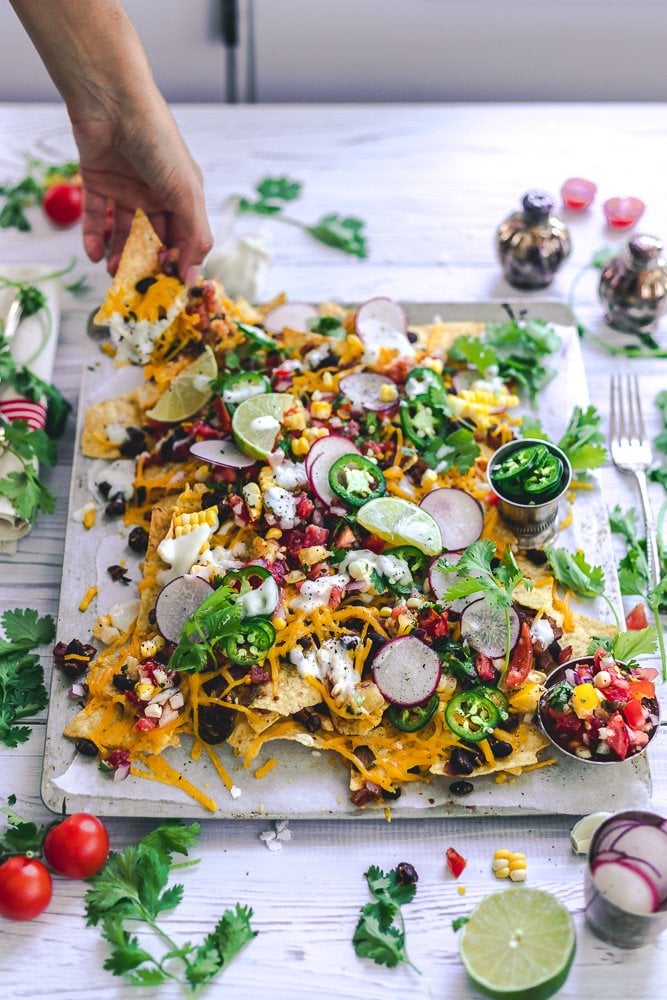 A few tips for these Black Bean Nachos

I must tell you that these nachos bake QUICK! You’ll only need them in the oven for 5-10 minutes. I like to keep close, and check often to make sure the tortilla chips aren’t burning. They’re fine a little brown of course. But it would be a tragedy for your hard work to go in the garbage. So keep close watch, and check them often.

It’s not always easy to find vegan cheese, but your best bet is at an organic grocers. The brand I used for this recipe is Daiya Cheddar Shredded Cheese, and I bought it at Wholefoods. I like this brand because it melts well for a stringy cheese. It’s similar in texture and taste to real cheddar. I also like the ingredient list. It’s minimal and easy to understand.

If you’re digging these Fully Loaded Black Bean Nachos, you might also like to try these recipes:

I’m always asked what items I like to use in the kitchen. So, I’ve included my favourites for making these Fully Loaded Black Bean Nachos. You can also find more of my favourite kitchen essentials and products on my Shop page.

used as the vegan cheese in this recipe

used in the black bean medley

Not my exact baking pan, but very close

So there we have it! A DELISH fully loaded black bean nachos recipe to round out the summer. It’s one to be enjoyed amongst friends and family, wherever you are this long weekend. Cheers to the end of summer, and to being back in Canada. Looking forward to sharing more delicious recipes, and some exciting Two Spoons projects coming your way.

For the zesty black bean medley

For the vegan sour cream (optional)

*It’s not always easy to find vegan cheese, but your best bet is at an organic grocers. The brand I used for this recipe is Daiya Cheddar Shredded Cheese, and I bought it at Wholefoods. I like this brand because it melts well for a stringy cheese. It’s similar in texture and taste to real cheddar. I also like the ingredient list. These nachos bake QUICK! About for 5-10 minutes. Keep close watch, and check often to ensure they don’t burn. Wait to add the salsa and vegan sour cream until the end. Otherwise the wet ingredients will cause your nachos to become soggy and gloopy. Assemble the nachos, black bean medley and vegan cheese first. You can add your salsa and vegan sour cream after baking. Nutritional information is a rough estimate.