This cauliflower pizza is middle eastern inspired. The crust is infused with curried spices, then spread with hummus for the sauce. Topped with colourful veg and chickpeas.
Prep Time: 40 mins
Cook Time: 35 mins
Total Time: 1 hr 15 mins
Jump to Recipe 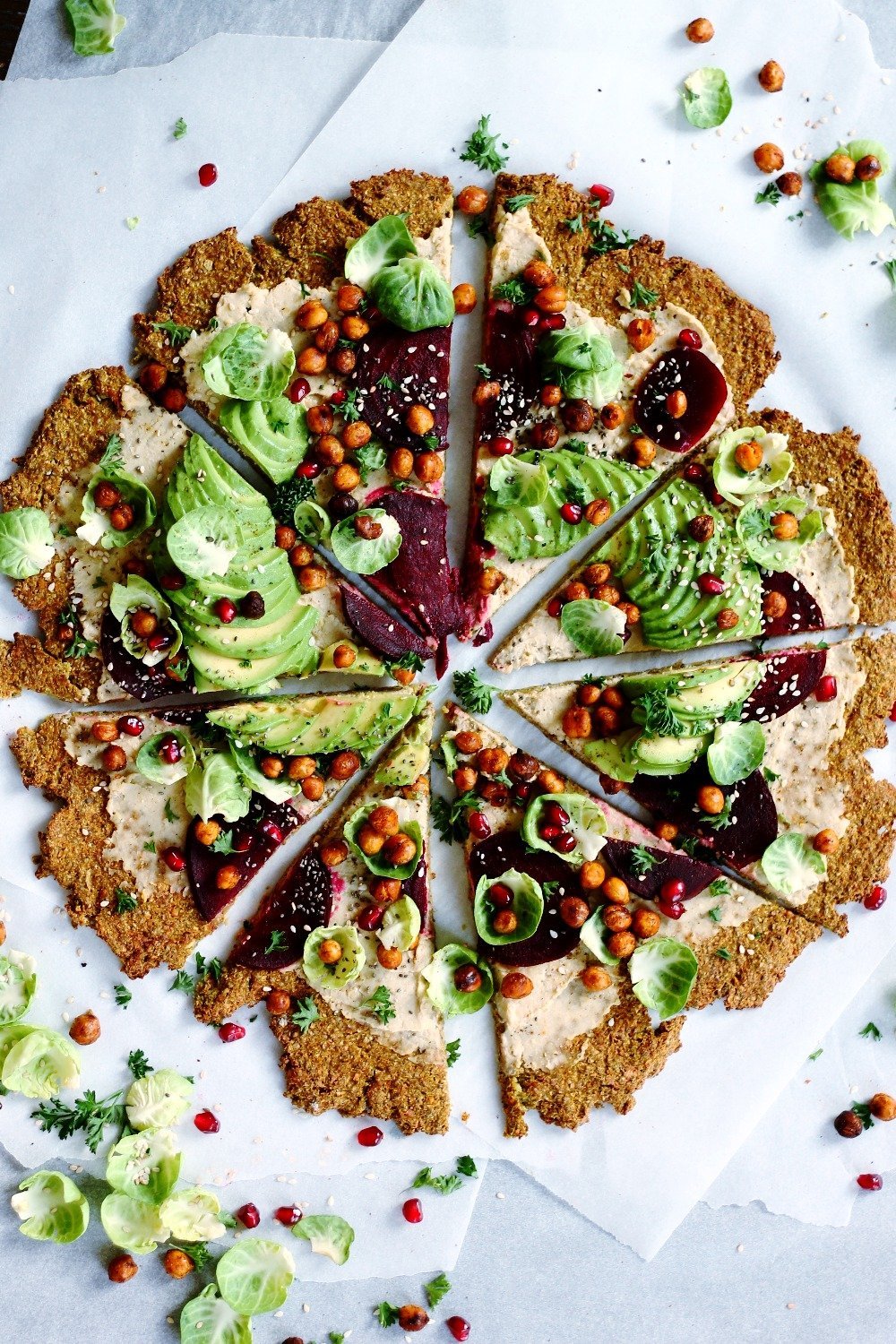 An american favourite meets Middle Eastern with this Curry Cauliflower Pizza! It’s made with a curry infused cauliflower pizza crust, then spread with garlicky hummus for the sauce, thinly sliced beetroot, avocados, brussels sprouts, pomegranate and oven-roasted curried chickpeas. Because I believe in a world of inclusivity; and that we should combine cultures, not pit them against each other.

Let me begin by saying that I often don’t like to express my political views publicly. I’m not a studied politico; knowing the ins and outs of world powers, government practices and fear mongering. But as of recent U.S. news I’m finding it harder and harder to ignore my political views, and stay quiet among the executive orders taking place. Because these executive orders, with their targeted religious bans, is one I feel very strongly about. 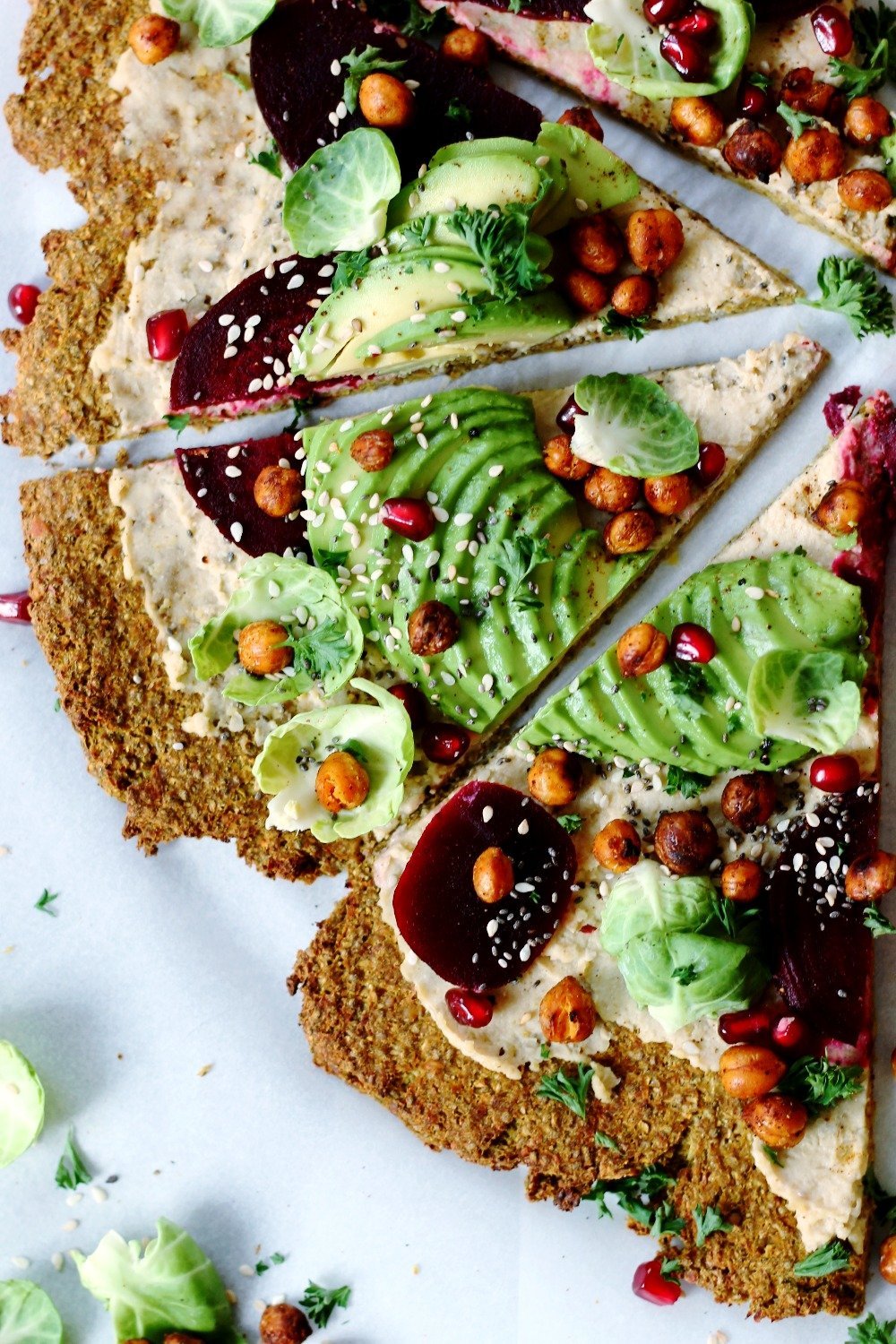 I am Canadian born and raised, now an expat living in France. My parents immigrated to Canada from England in their mid 20s. And prior to this my dad had immigrated to England from Uganda. He was born  and raised in Uganda, but was forced to leave his country under the ruling of Idi Amin, who had ordered the expulsion of Asian minorities.

I could write a novel about my parents’ life events, but will stop it here for now (after all, you opted-in to hear about food, not to hear me on my soapbox as I sort through mixed emotions). But I will say that hearing my parents stories; my dad under an oppressive Ugandan ruler, the racism he encountered after migrating to England, and the struggles of both my parents as new immigrants to Canada drives me to speak out about the racism and xenophobia taking place today. 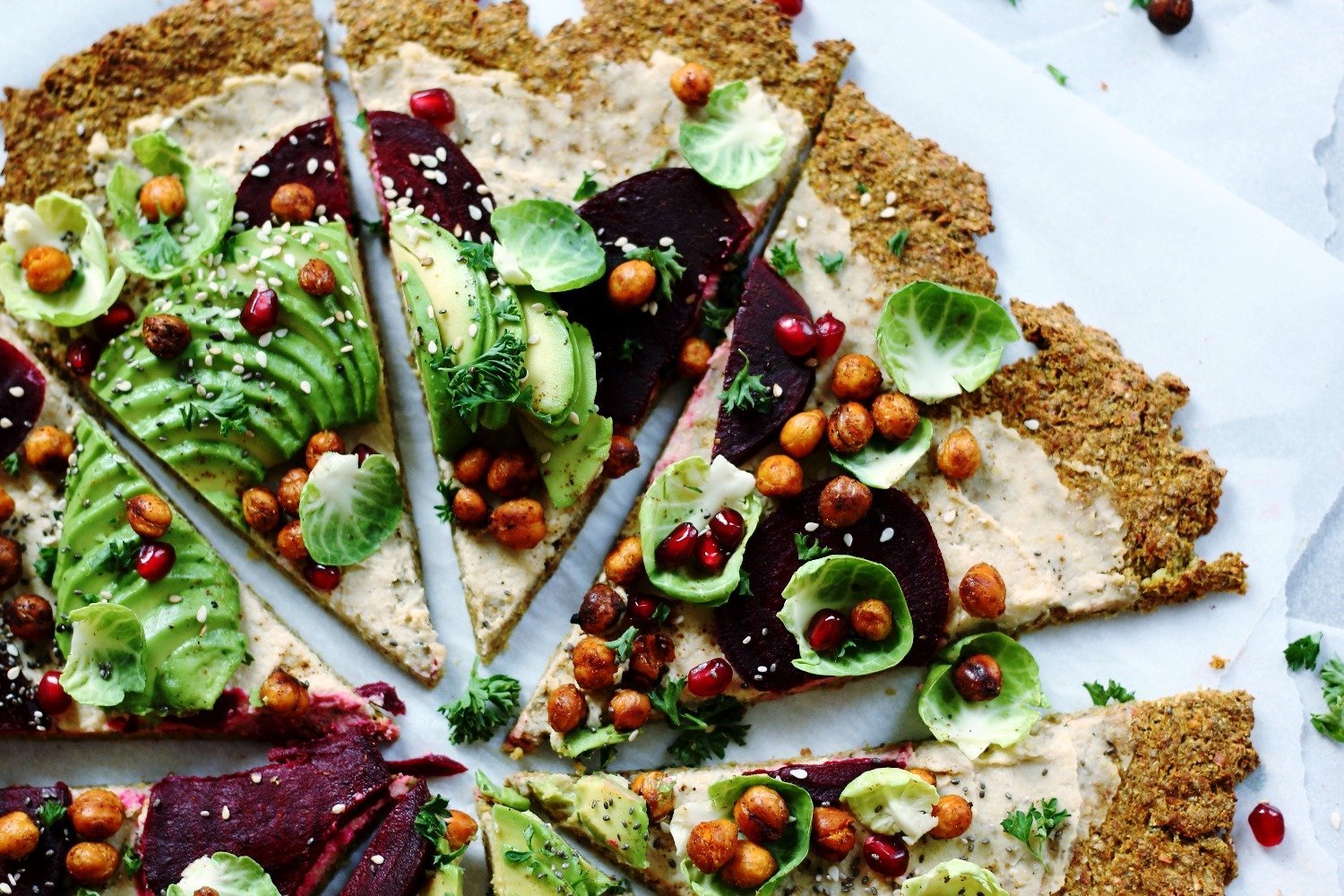 In addition I’m empowered to speak out as a Canadian, who was born and raised to believe it’s our differences that makes our nation unique. We pride ourselves in being a cultural mosaic that accepts and understands the power of difference for a vibrant and creative culture. And as a foodie I see it best displayed through the fusion food community in Canada, which learn from each other to create and combine fascinating dishes. Plates that blend and borrow, and fulfill our lives with richness and diversity. 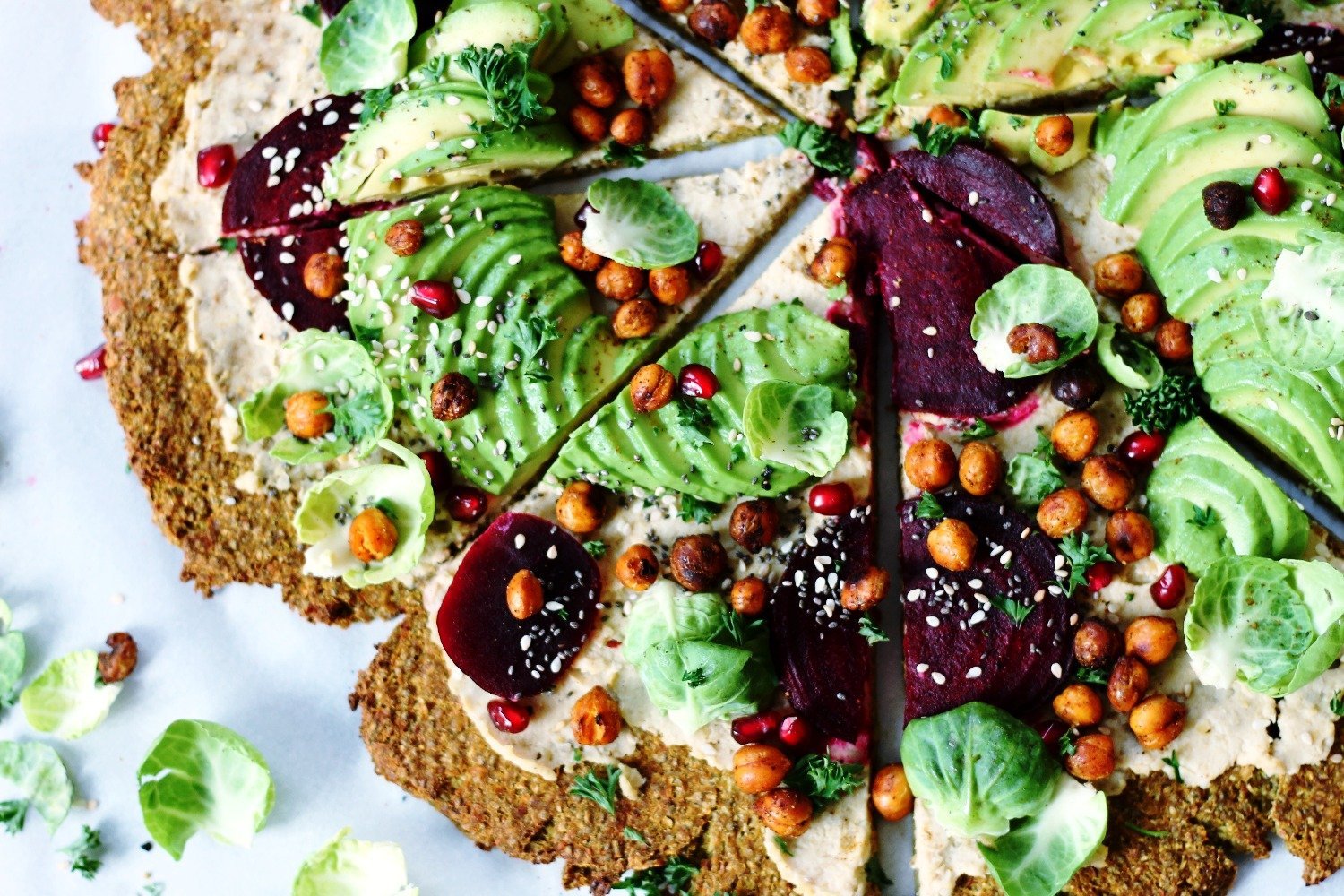 This American favourite starts with a cauliflower pizza crust infused with curried spices, then I’ve spread on a layer of hummus for a middle-eastern “sauce,” topped it with sliced beetroot and avocado, sprinkled with pomegranate and oven roasted curried chickpeas. The flavour medley when combined is pure joy. And gives me a little spark of hope that differences when united can lead to beautiful outcomes. I hope you love this cultural blend as much as I do. And let me know what cultural fusion dishes you like to enjoy. It would be a pleasure to hear your thoughts. After all, let’s not forget this American favourite descends from Italian origin. 😉

That’s all for now. Peace and love. xx 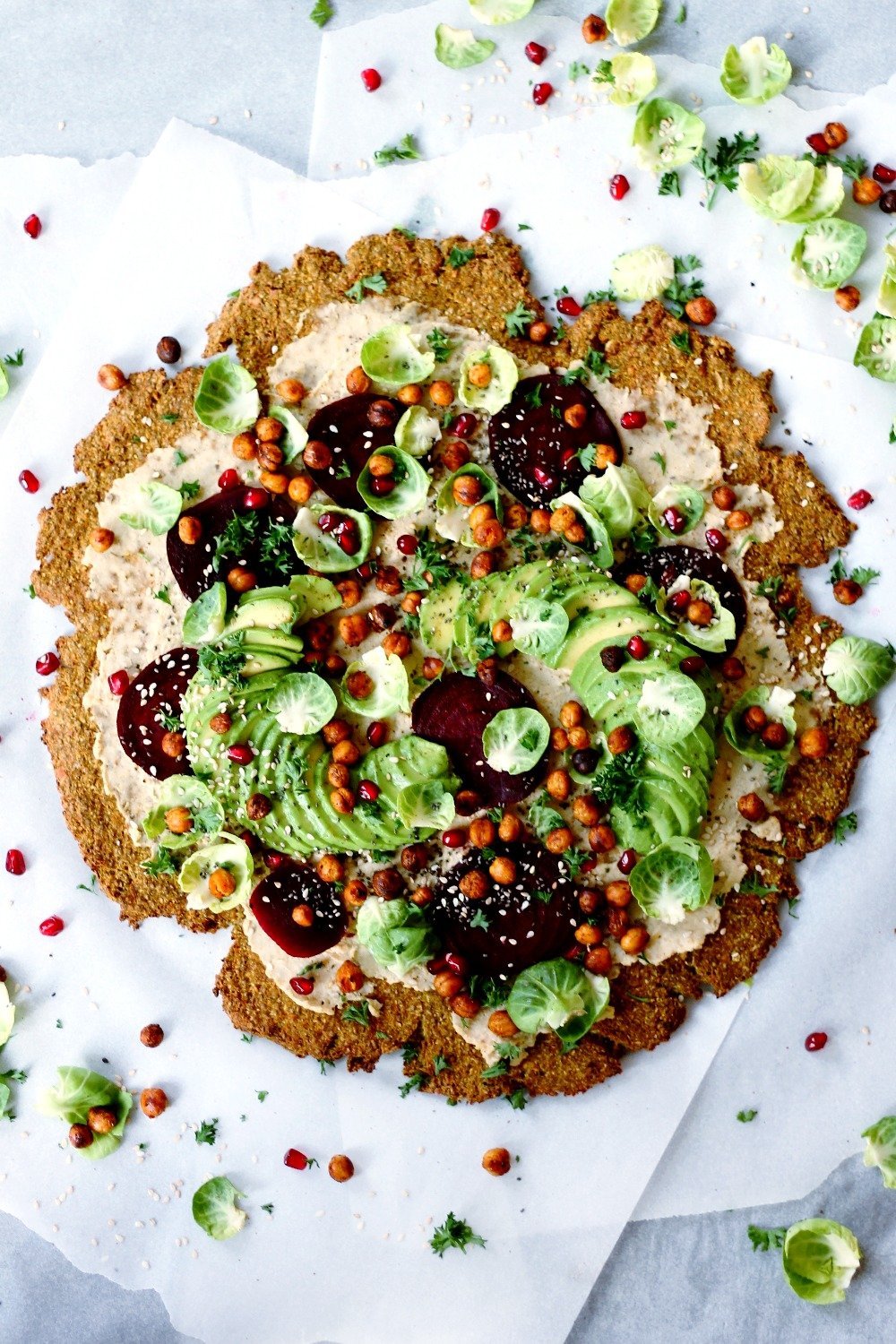 This cauliflower pizza is middle eastern inspired. The crust is infused with curried spices, then spread with hummus for the sauce. Topped with colourful veg and chickpeas.
Print Recipe Pin Recipe 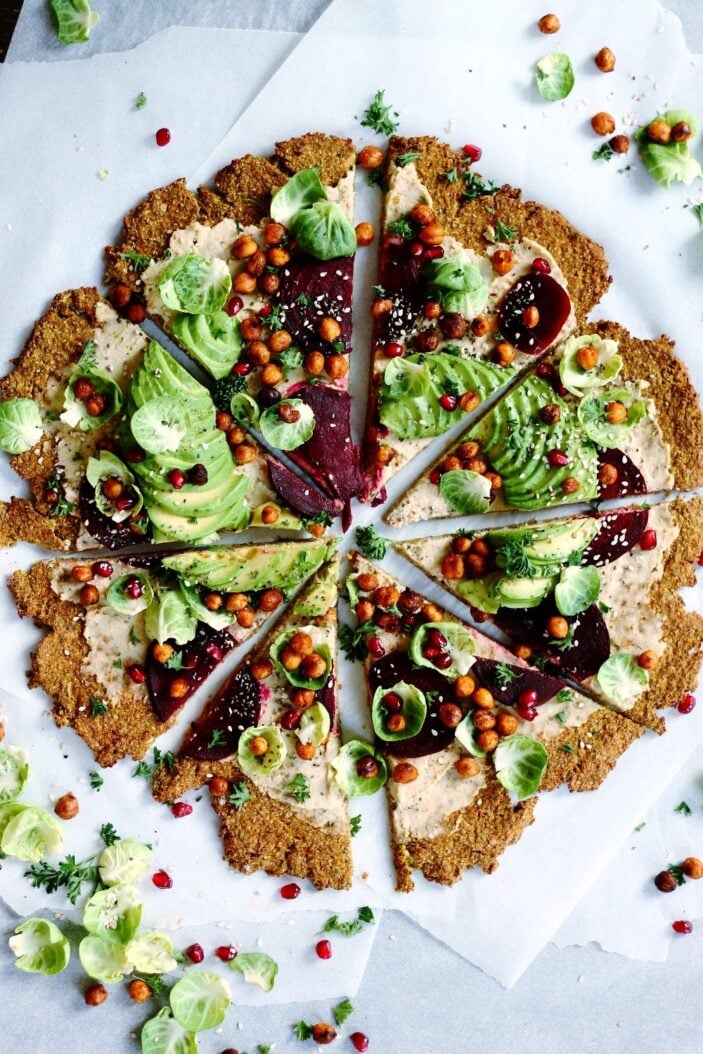 *Tip for the dough: After transferring the dough to parchment paper begin flattening it with your hands. Flatten dough to be about 2-3 inches thick. Then layer a piece of parchment paper over top and roll to flatten to 1/4 inch thick. (The top layer of parchment paper will stop the dough from sticking to the rolling pin). Peel off the paper and you're left with a thin flatbread crust ready to bake.